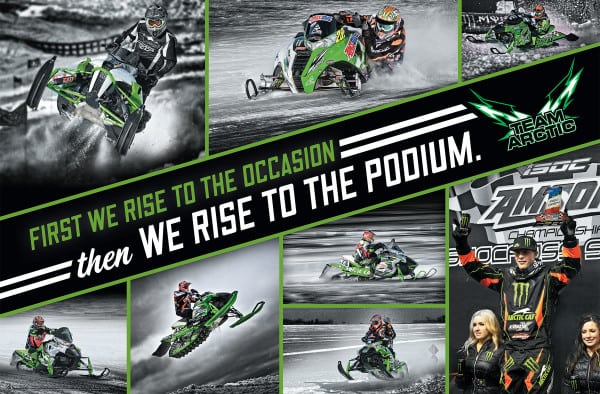 Arctic Cat was definitely proud of their race track accomplishments this past season, and after taking a look at their season as a whole, we were too. Here’s the official release from the Cat crew and the year end championships they amassed. Congrats to all!

Thief River Falls, Minn. (May 6, 2013) – As the last checkered flag dropped on the 2012-2013 snowmobile racing season, Team Arctic racers upheld the tradition of claiming the most high-point championship titles in the sport’s most prestigious circuits. The championship success underscores the talent and dedication of the racers and crews, as well as the high-performance pedigree of the Sno Pro and M Series snowmobiles.

“When you win most of the battles, you’re likely going to win the war,” said Team Arctic Race Manager, Mike Kloety. “In USXC cross-country especially, yet also in ISOC snocross and RMSHA hillclimbs, we won more than our share of the battles and, as a result, took home most of the championship high point titles.”

The most stunning display of championship supremacy unfolded in the USXC cross-country circuit, where Team Arctic racers claimed High-Point titles in 13 of 20 classes. Headlining the cross-country domination were Christian Brothers Racing Pros Ryan Simons and Zach Herfindahl, who finished 1-2 in both Pro 600 and Pro Open championship tallies. Other stand-out title performances in USXC belong to Benjamin Langaas, who won both Expert 85 and Improved 85 titles; And Jolene Bute, who won all 10 Womens finals (and the Championship title) during the season.

In ISOC National snocross competition, Team Arctic/Monster Energy superstar Tucker Hibbert reclaimed the Pro Open Championship title following a season of ironclad domination during which he won 11 of 16 finals, plus his sixth Winter X Games gold medal in a row. Joining him atop the ISOC Championship box was Team Arctic’s Josh Zelinski, who captured the Pro-Am Plus 30 high-point title.

In the MIRA enduro circuit, Cadarette Racing added to their long series of outstanding accomplishments by taking the overall Pro Enduro Championship with racers Troy DeWald and Ryan Spencer.

“As much as we value and appreciate individual race wins, I believe that high-point titles tell the most complete story about Team Arctic,” said Kloety. “These championship titles reflect speed, consistency, mechanical aptitude and, of course, dedication. So on behalf of everyone at Arctic Cat, we want to thank all the racers, crews and teams who made 2013 a season of championship success.

“Likewise, I want to express our gratitude to all Team Arctic racers who took part in the 2013 race season. We’re already moving forward with improvements to our race sleds and program for the coming season, and we’ll be back in the action this summer with grass drag competition.”