Team Arctic raced in two different states again this past weekend, but compared to National Snocross in its eighth round, the Hillclimb teams kicked off their western RMSHA season. Winning headlines was the result for both.

In the premier Pro snocross class, Team Arctic added a new name to the podium — No. 115 Trent Wittwer took third in Friday night’s final. No stranger to winning on an Arctic Cat, this marked Wittwer’s first podium in the class. 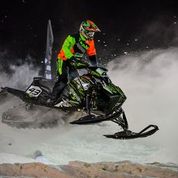 Wittwer said, “This whole year, I’ve felt really strong, but have been dealing with a wrist injury. It feels good to finally be on the podium. It was a gnarly track, but I stayed on my lines and finished strong.”

Saturday, the weather continued to be incredibly cold, but that didn’t bother Christian Brothers Racing’s Logan Christian as he qualified 5-4 in his heats for the final. Off the starting line, Christian used his outside position and his Arctic Cat pulled him to the front of the 14-rider field. After the first few corners of mayhem, things settled and he found himself in third. Christian continued to pressure the front runners. With just one minute left on the 10-minute timer, he passed for second, ran down the clock and put an exclamation mark on the remaining two laps to hold on to second.

His first podium since the opening round in Elk River, Christian said, “It was tough. I found some good lines a couple laps in. I took advantage of that triple-triple on the backside. It was fast! It’s great to be back on the podium in front of our home track fans!”

“Team Arctic racers continue to have success. Our riders are really working hard and our ZRs perform strong,” said Team Arctic Race Manager, Mike Kloety. “It’s great to see it all come together when both grace the podiums.”

Garth Kaufman showcased his talent, scoring wins in both 600 Improved and 700 Improved, while Kyle Tapio followed suit, besting Pro Masters Improved. In the Pro Mod classes, a trio of seconds were claimed by Kaufman (600 and 700) and Tony Zollinger in Master.

“Our racers had a strong performance at Bear Lake. I’m proud of their hard work, and I expect we’ll see some even greater results throughout the season, said Kloety. “I also want to send a heartfelt congratulations to the Kincaid family from the Arctic Cat family. Rob Kincaid was named RMSHA Racer of the Year and it was great to hear the trophy was presented to his son, Riley, and wife, Kim. Rob and his accomplishments truly make all of us at Arctic Cat proud.” 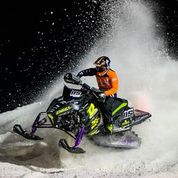 Pro Am Plus 30 Saturday 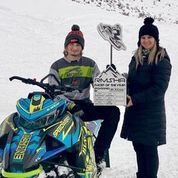 RMSHA Racer of the Year