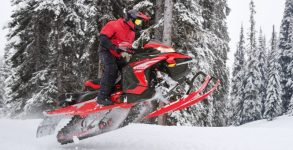 Fertile, MN (January 18, 2021) – Christian Brothers Racing (CBR) followed up their strong start to the National Snocross season in Elk River with another