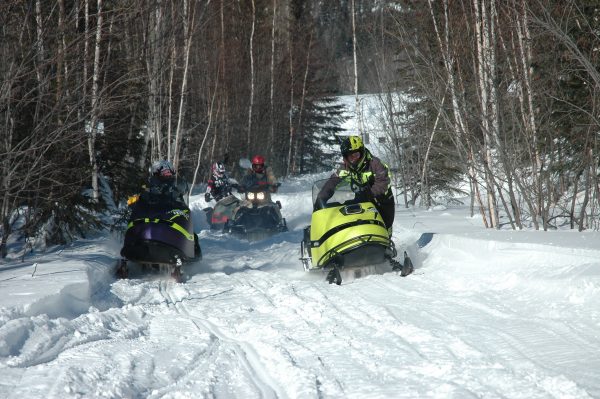 Chibougamau, is not a word you come across that often, and in case you are having a little trouble pronouncing it try sounding it out as: Che-boo-ga-moo. With a little practice its not only a pretty fun word to say, its also a pretty fun place to go snowmobiling!

Chibougamau has a population of just over 7500 people making it the largest town located centrally in the Nord-du-Quebec region of the province. Needless to say its a bit out of the way. Driving from Trois-Rivière, you are looking at a 600 kilometre tour pretty much directly north, so you have to be committed to get there. 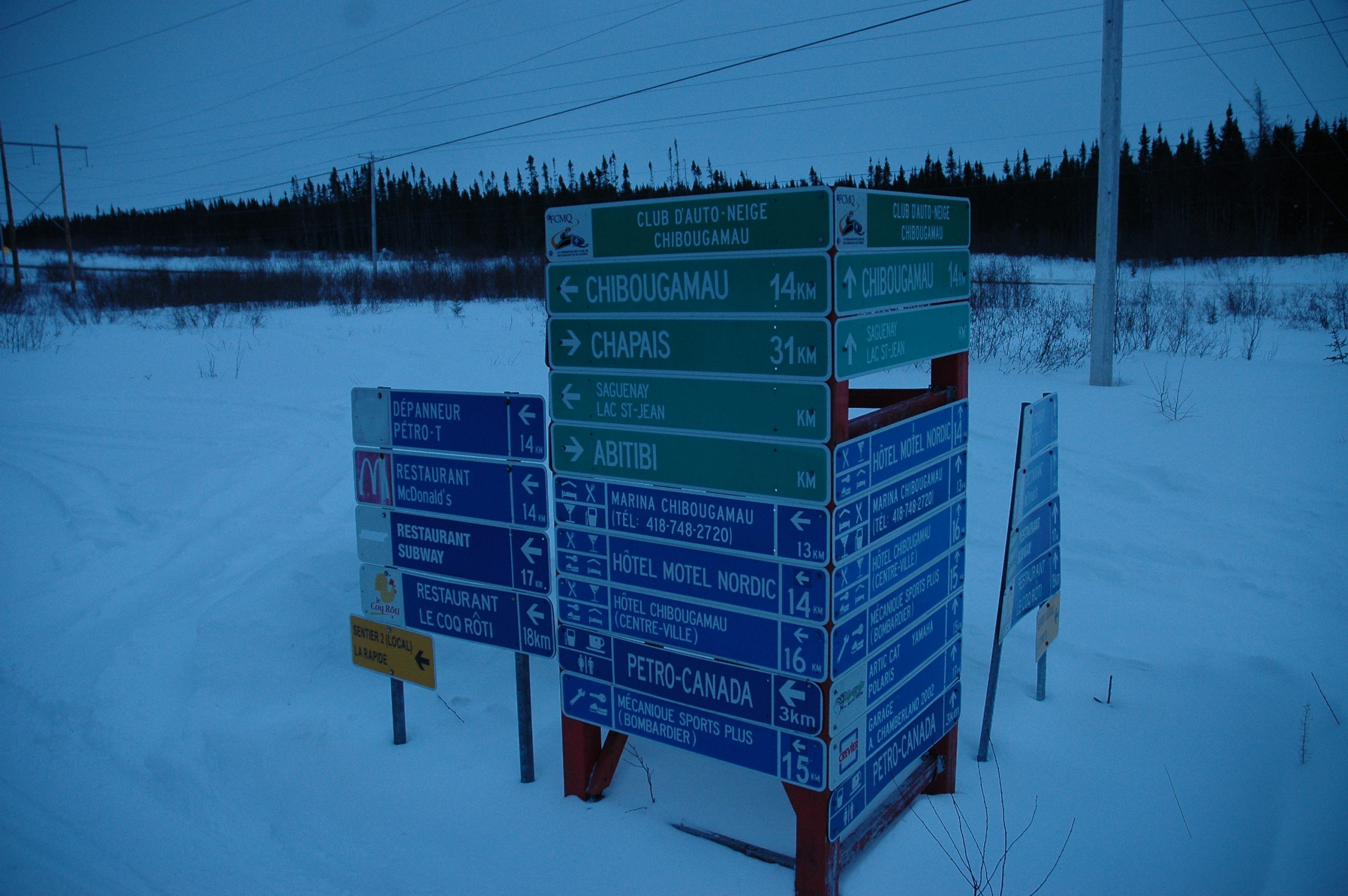 Chibougamau is also a popular stopover for riders tackling high mileage multi day snowmobile tours in this area of Quebec. Heading north east out of Val Dor, on your way to Sagunay on the 93 trail, Chibougamau is right in the middle of two 400km days. The town is a great resource for people either driving or riding in. There is plenty of accommodations, lots of options for food and evening entertainment, as well as dealer support for all brands. Think of it as a Mecca for sled-heads traveling in this region.

The trails in this region are what you’d expect in the Quebec FMCQ system (awesome), however they have a remote in-the-wilderness feel to them. Even riding close to town, where a good portion of the community ride snowmobiles, you don’t see many other riders. If you’ve never been in this area before, I urge you to check it out on the FMCQ’s interactive website. Chibougamau, is almost at the most northern point in the entire system, and a should give you a pretty good impression for its remoteness. This map should also give you a good impression on how epic a tour though this area would be. Although I’ve never done this particular tour, I’ve spoken to many people who have and everyone raves about the experience.

My tour into Chibougamau, was behind the wheel of truck. Which was a better trip then I expected. The roads up here are pretty good too, but bad weather would sure make them more interesting! We were coming to town to spend a day riding, and then to participate in the final day of the annual Festival Folifrets Basie-James. 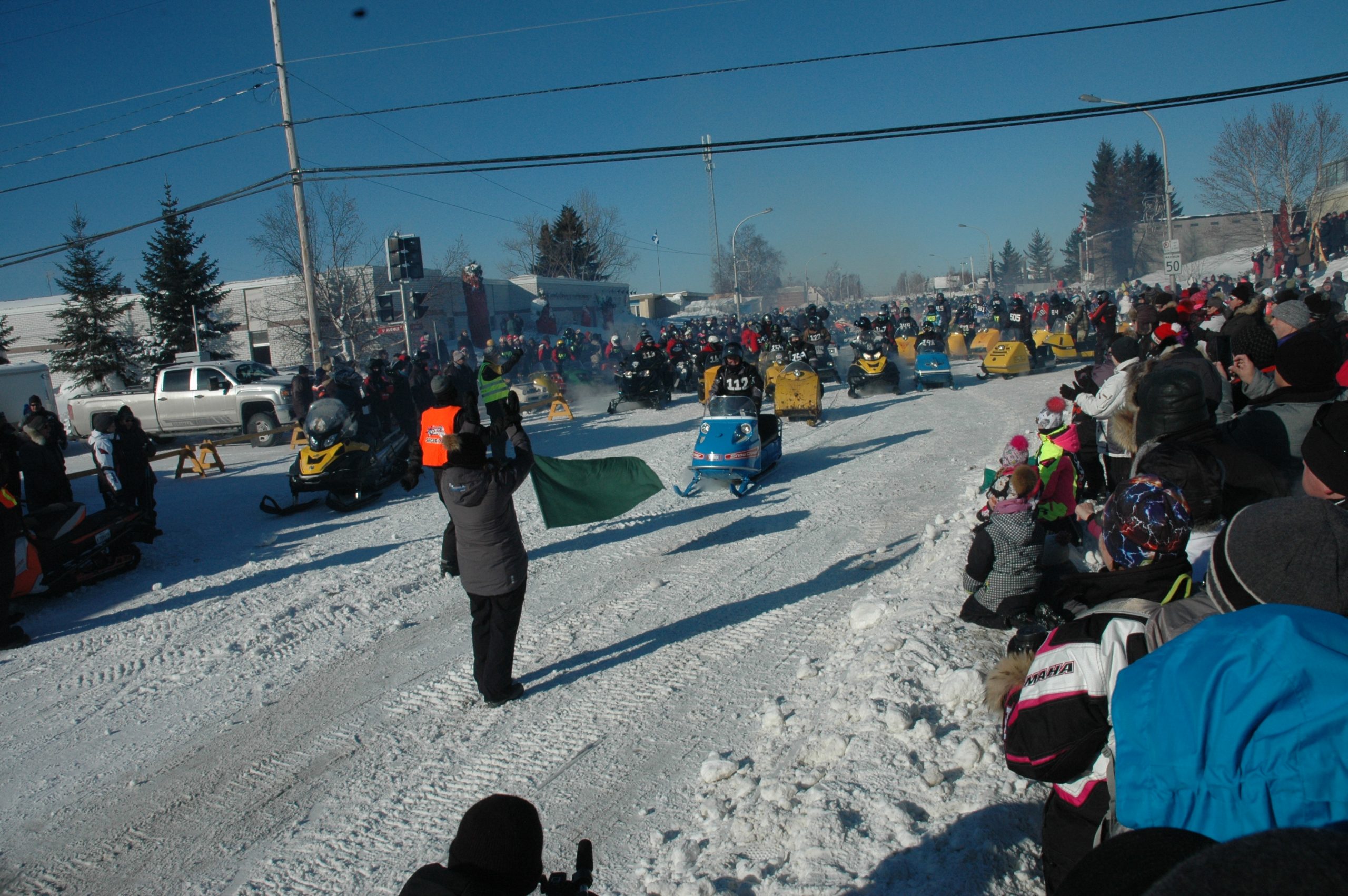 This winter carnival takes place over 2 consecutive weekends, along with activities all through the week. The festival begins with a cross country snowmobile race on the first Saturday. Classes include Pro, Semi-Pro, Vintage, and Participation so there is something for everyone. The course is a large loop of about 50km. The number of laps you have to complete depends on the class you enter. It’s open to everyone who wants to compete, and the day finishes with an awards ceremony and party at the arena.

On the final weekend, the largest event takes place the Randonnee du President. This was the event we came to town for. The Presidents Ride is simply all about having fun, celebrating community spirit, and snowmobiles. Think of this event as a poker run, where the winner is the one who accumulates the most points. However the best way to earn points is to enter an old sled.

The event is open to everyone and any sled, however older sleds are awarded more points at registration. So, if you are serious about winning you better show up with a vintage ride! This one rule completely defines this event. Walking up and down the downtown staging area, it’s filled with sleds dating back to the beginning of the snowmobile history. There are near perfect examples of old tin cab Ski-Doos, and plenty of good ol’ beaters too. Modifications are allowed as well, so there is a bunch of old built sleds that are prepared just for this event. Even the riders get in the spirit of things with vintage gear and costumes.

The ride starts in a glorious pall of 2-stroke smoke as close to 700 sleds come to life and rumble down the Main Street that has had a layer of fresh snow laid down. Spectators line the way seeing off the entrants as they set off for the journey. The loop is a round 60Km which doesn’t sound like much, but on old vintage iron, just finishing is an accomplishment. In addition, just think about what the trail would look like after all theses sleds head out of town and return on the same one. However bad you can imagine it to be, it’s probably worse. This just adds another layer to the challenge, along with the leave no sled behind attitude of the participants. 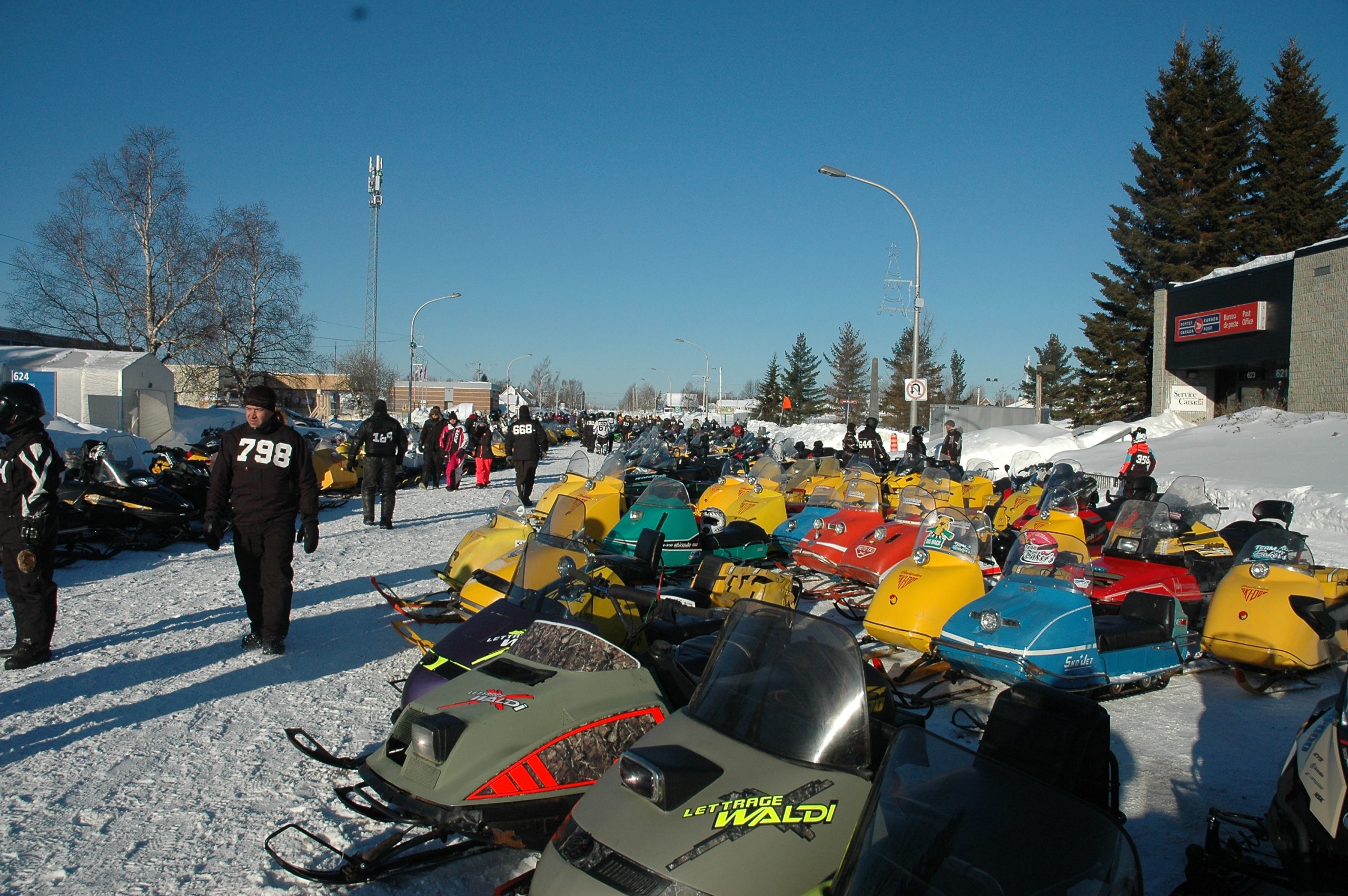 After returning to town, back on the Main Street riders gather extra points with a bean-bag toss, and a single throw of a bowling ball at the local lanes. At the end of the day there is a huge party at the Chibougamau community arena where the last of the cards are drawn and points totalled for the winners.

My Presidents Ride, took place on a borrowed 1968 (I think) Ski Doo, modified with a Non-Rotax engine. This old beauty made it the entire way out to the checkpoint and back to town without a single breakdown. Although, given the conditions of the trail, and the fact that the sled was borrowed, I was keeping the speed down and rolling with the moguls instead of just pounding through. I really didn’t want to break the sled, I just wanted to make it.

In addition to not wanting to break the sled, I wanted to spend as much time on the sled as possible to experience the event. Riding back to town, as my spine was quickly disintegrating, I was having a blast. The same crowd that saw us off earlier in the day had grown even larger as the parade of arrivals rode back up the Main Street. All the riders were met with cheers, waves, and high fives as we rode past on our way to the beanbag toss and bowling alley.

Experiencing the community spirit of Chibougamau, while actually participating in such a great event was a special feeling. I was reminded of how much fun snowmobiling is and should be. This ride has nothing to do with horsepower or speed, or even with coming in first, its simply about coming together as a community and enjoying winter and the snowmobile. 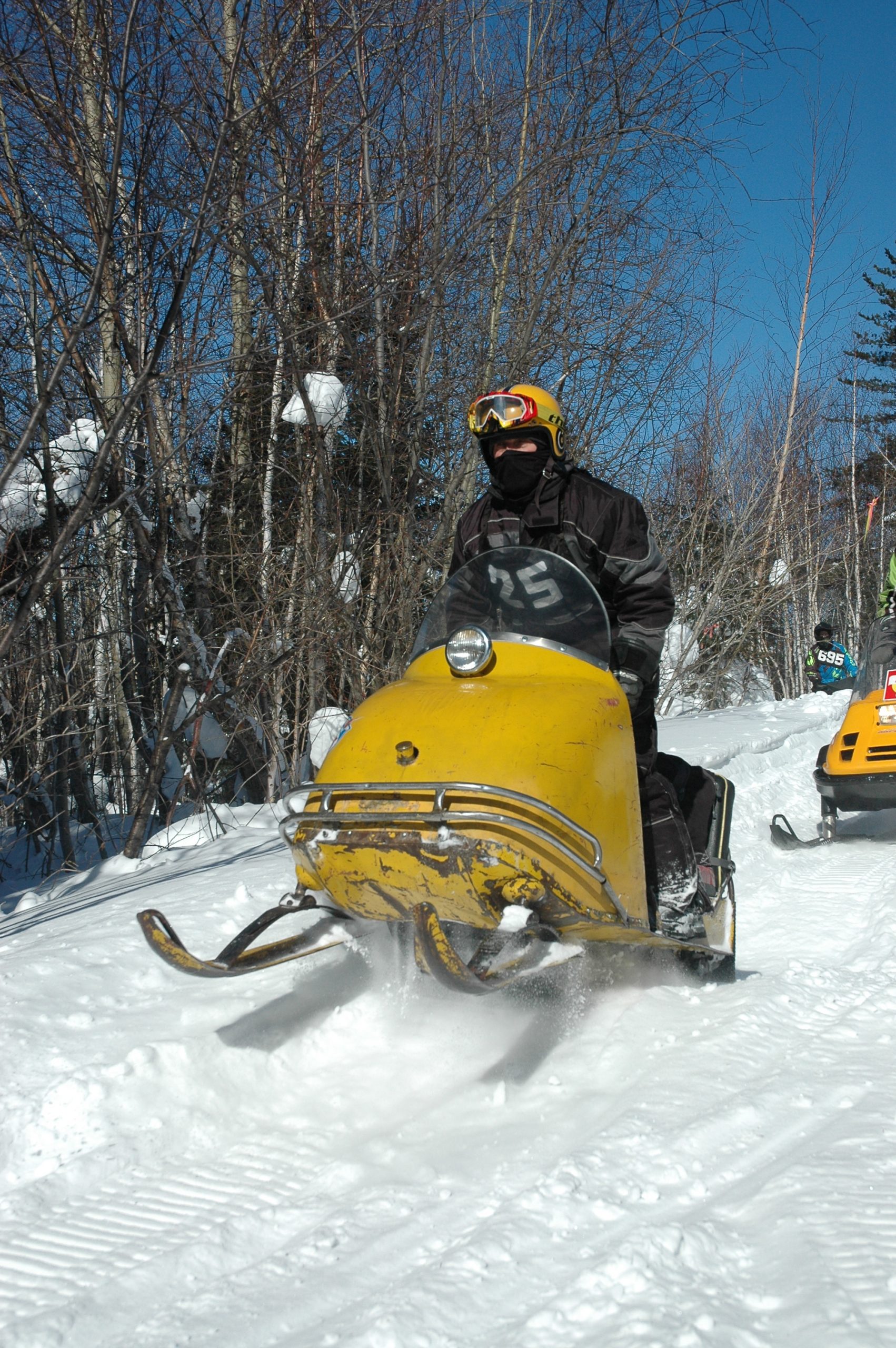 This years Festival takes place from February 28 to March 7

Check out the STV YouTube portal for our story on Chibougamau