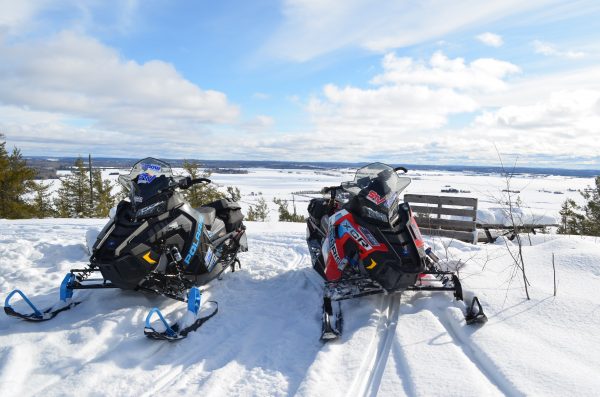 The key for a region to bring snowmobilers into their area, and bring them back time after time, is pretty simple when you ask a sledder. Relatively smooth and well signed trails with good maps and fuel stops, and good accommodations and food. If the area meets this criteria, it can easily cater to snowmobilers. Tourisme Abitibi-Temiscamingue takes all the guesswork out of snowmobiling in their region. They meet all the standards and have a wide variety of destinations that can be tailored to any budget. With over 3700 kilometers of trails in the Abitibi-Temiscamingue region, and with all of the snowmobile friendly cities and towns, this area has a true calling for snowmobilers to explore.

Depending on where you are travelling from, you can be in the Abitibi- Temiscamingue relatively quickly, it’s not as far away as many would think.
We left our offices north of Toronto, and found ourselves driving our truck in the region within three hours, and our starting point of Ville Marie within four hours. 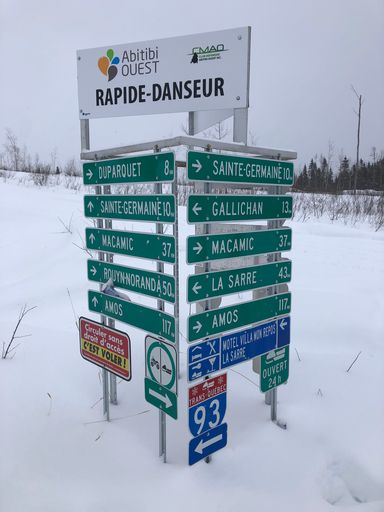 We arrived in good time, and were checking into the Motel Louise Rec. by 9:30pm. There is plenty of good parking for large trucks and trailers in the back of the hotel, and you can leave them there while you are snowmobiling. After we brought all of our gear to our rooms, we quickly regrouped and made our way to the billiard room. We missed the kitchen closing, however the establishment doesn’t close until late, giving us ample time to have a few beverages and discuss the morning plan.

In the morning we discovered that Motel Louise Rec. has a fantastic restaurant that many locals visit for breakfast. We were there for seven and it was busy.  It has everything you could want and more for breakfast, and was a great spot for us to map out our first day. Our first day was going to be a good one, travelling around 250 kilometers in distance. Our goal was to arrive in La Sarre via Rouyn Noranda before nightfall.

On the way out of Ville Marie, we visited a lookout on the town north end. We suggest that you take in these lookouts, as you never know when you will get the opportunity to again. Don’t be discouraged going up the goat path to the vista of this lookout, it’s worth it. We took a few pictures, and took our time heading back to the 303 trail, and then connecting to the 93 North and continuing our way to Rouyn. 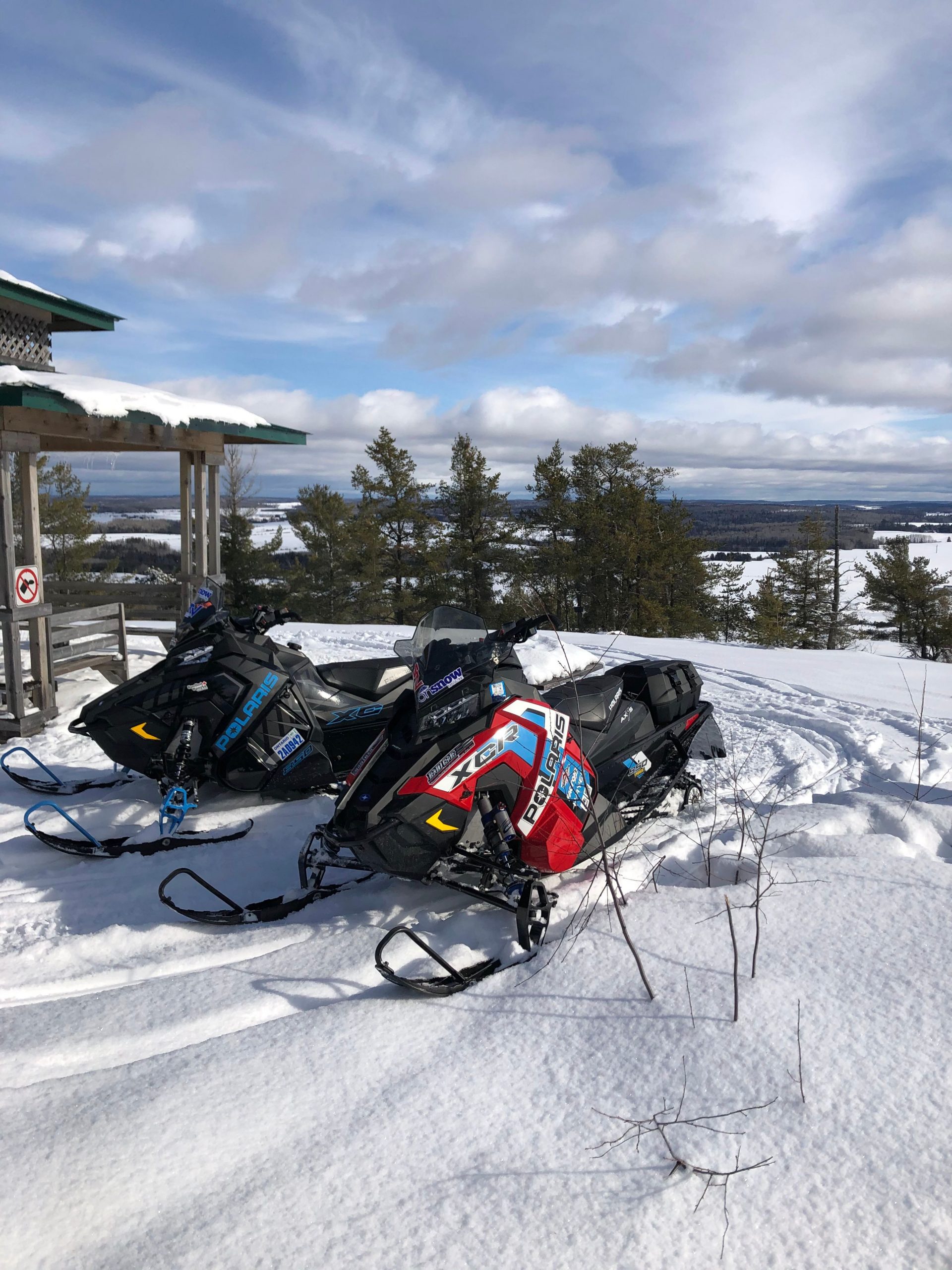 There is a lot of good running on the way north – endless farmers’ fields combined with rail trail and bush trials, gives every rider a little bit of everything. We were even able to drive across a large hydro dam. It was a bit of an awkward feeling at first, with all of the water flowing. The general size of this hydro dam made pick-up trucks look more like toys, and snowmobiles even smaller. 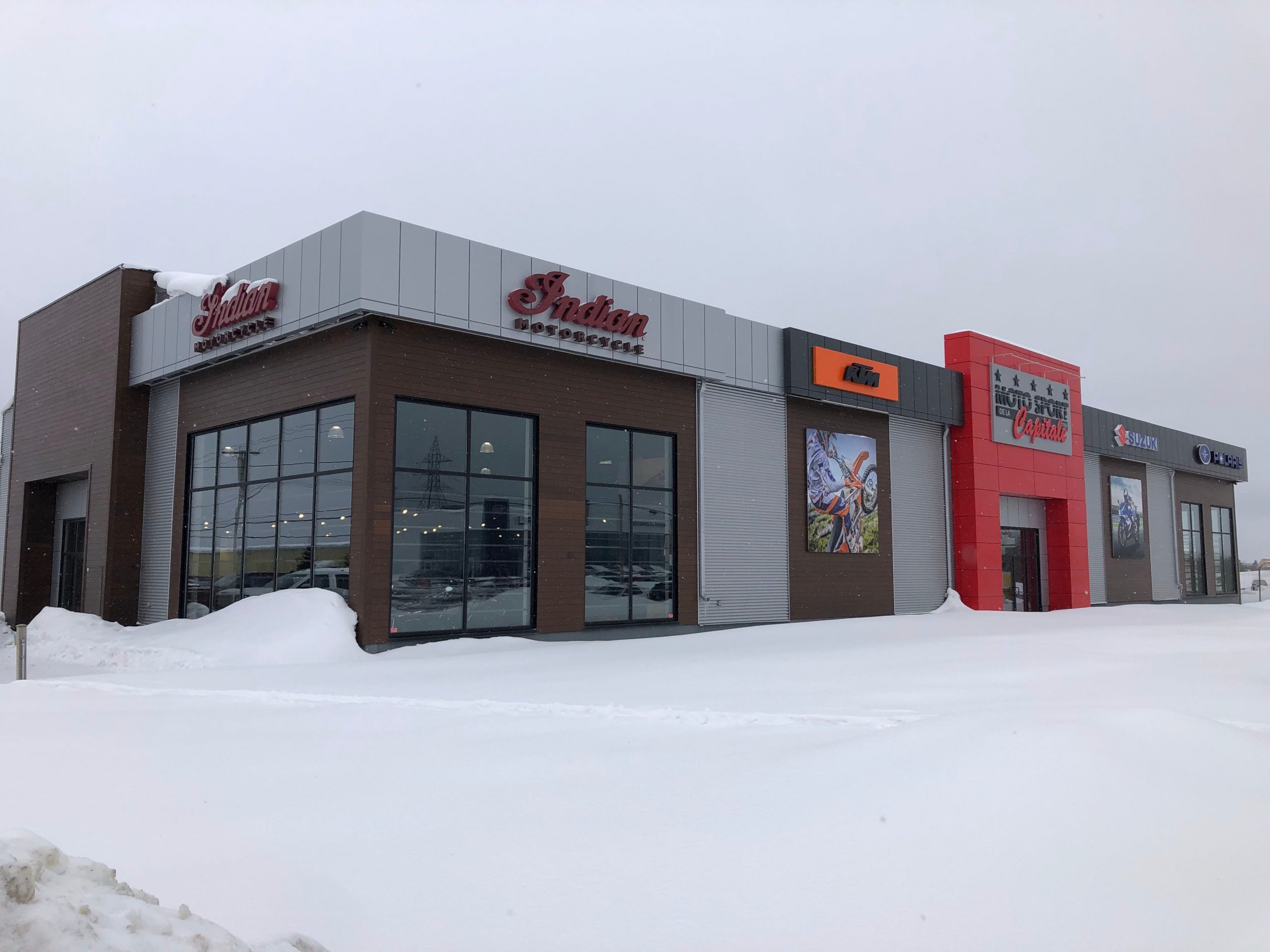 Making our way into Rouyn Noranda was very easy with all of the signage. However, one of the sensors on one of the snowmobiles had a failure, and was forcing it into limp mode. This is not the way you want to start the first morning, but thankfully, this happened as we entered town. After a little wandering around, we found our way to the local Polaris dealer, Moto Sport se le Capitale. If you could call anything lucky in this moment, it was that this happened where is did. Within a few hours, Moto Sport se le Capitale had us back on the 93 trail, heading north again on our way to La Sarre. La Sarre is roughly 90 kilometers from Rouyn Noranda, chalking up the time loss to only a meal loss.

It felt like a longer than usual day, with many ups and one down, but we were back on track and found our hotel, Villa Mon Repos in La Sarre. After a skipped meal and a 250 kilometer ride, we were fortunate to see that Villa Mon Repos has a Boston Pizza attached to it, allowing us to graze for hours while watching the hockey game. 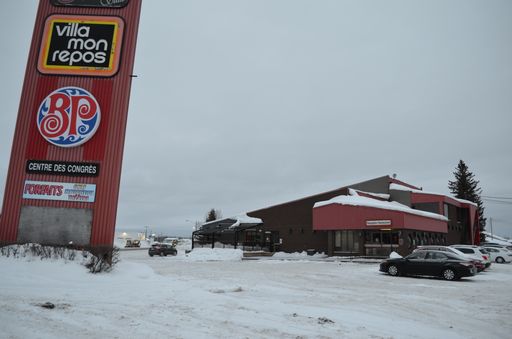 Making our way to breakfast, we had a bit of a worry as Boston Pizza isn’t known as a breakfast restaurant. We were starting to think that we would be eating muffins and hotel lobby coffee for breakfast. To our surprise, there is a switchover in the night, turning “BP” into a full service “a la carte” breakfast spot. We mapped out our day’s ride to Val-d’Or by going through Amos for fuel and lunch. In total, it should be around a 230 kilometer day, which on these trails is a non-pressing day, allowing us to spend a little more time checking out the trails and sites.

From La Sarre we headed east on the 93. The trails are predominately in the woods with some fields in between. We fueled the night prior, which made it easy for us to get all the way to Amos before needing to refuel again.  We were planning on eating at the Amosphere restaurant, but we arrived too early in the day, and the restaurant wasn’t open. The town of Amos has a population over 12,000, so there are multiple restaurants in town. Fortunately for us, we found a very busy old-school pizzeria which had a gas station across the parking lot. This made our stop in Amos extremely easy before pushing on to Val d’Or. From Amos to Val d’Or, there are a few different ways you can take, depending on how many kilometers you want to go. From Amos we made our way back to the 93 East, and exited on the 309 South, and were just over 100 kilometers to our destination in Val d’Or. 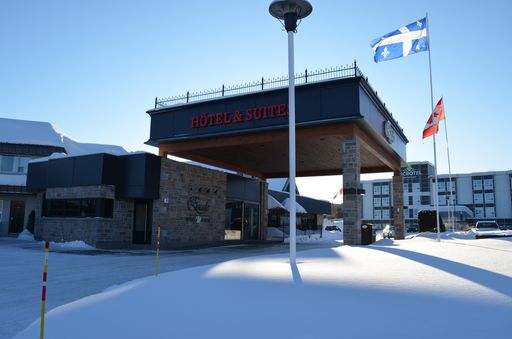 Getting to Val d’Or is easy with the signage, but once there, we had a little struggle finding our way to the hotel, but ultimately found it. We stayed at L’Escale Hotel & Suites. It was worth the few extra times we had to stop in town and check maps with the GPS to find it. After we checked-in, we parked our sleds in the heated garage for the night. A heated indoor snowmobile parking garage is next level as it eliminates theft, and also thaws the sleds and makes the morning start that much easier.

In this northern Quebec city of over 30,000 inhabitants, there are many restaurant options. However, after checking out what the hotel had to offer, we opted to not leave. L’Escale Hotel and Suites features both a restaurant, Le Canon, and a bar, the Bar Club Lounge. After zero deliberation, we chose the Bar Club Lounge, which has the same offerings as the restaurant, but with a more relaxed atmosphere. 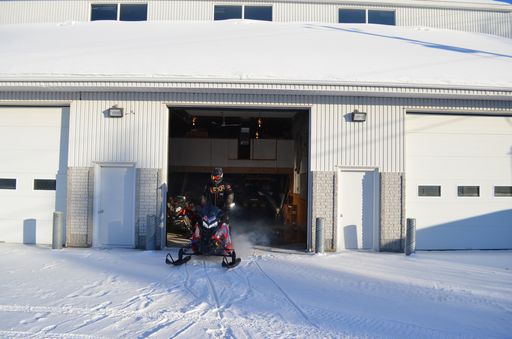 Breakfast is buffet style, served in the Bar Club Lounge, which was perfect as we grabbed last night’s table to go over the ride back to the truck and trailer. The ride back is about 250 kilometers, and is fairly straightforward travelling south on the 309, through Rapide-Sept to the 63 where we head west. This was some of the best riding that we encountered on our entire ride. Navigating down the wooded 309 is very simple, and it ends perfectly at the 63. However, while you are riding down the 309, you have to pay attention to your fuel consumption, since fuel stops are few.

When we arrived back at the Motel Louise Rec., we loaded our trailer and made our way for our final dinner and night on the shores of Lake Temiscamingue at La Bannik. La Bannik has a lot to offer snowmobilers with its location, spa, thirteen luxury cabins, heated snowmobile garage, excellent truck and trailer parking and one of the best-known restaurants in the entire region. After a long dinner, while going over the entire trip of where else we would like to go next in the region, we all agreed that we want to come back to the Abitibi-Temiscamingue area to enjoy the hospitality and explore a little more.