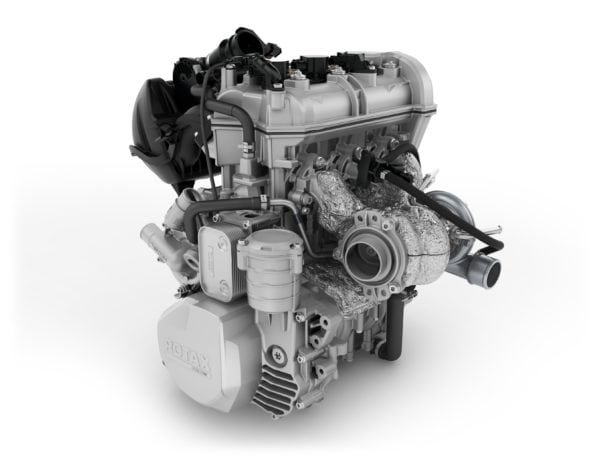 Rumors of infusing the three-cylinder 900 ACE engine with forced induction have been swirling about for some time. Thus, it wasn’t too shocking to finally see the “charged” motor in the line-up for 2019. According to Ski-Doo, this engine represents the first snowmobile specific turbo-charged four-stroke engine for the company, meaning no pieces were borrowed or adapted for the application. The sled specific design produces a 150-ponies, a number that may seem “short” for those who were hoping the company would come with enough power to compete with the king of swing Yamaha Sidewinder. Ski-Doo officials claim they wanted to come with the “right package,” meaning the right balance of power to mate with the chassis and intended application. The new motor is available in a few different model configurations including touring (great fit), Renegade Enduro (one up trail cruiser), and a Renegade XRS. All utilize the throttle-by-wire technology and three driving modes (Sport, Standard, and ECO). For certain the 900 Turbo has ample thrust, propelling all models forward with blur type velocity, but power delivery can be abrupt and in some instances hard to control. While we would expect the Sport mode to deliver intense acceleration, control is more akin to a light switch. We’re hopeful further refinements to this will be made prior to production.

With the initial breathless hype subsided and time to make a spring buying decision, the staff at On Snow Magazine is bringing you 19 days of new snowmobile and technical innovations along with our first impressions.