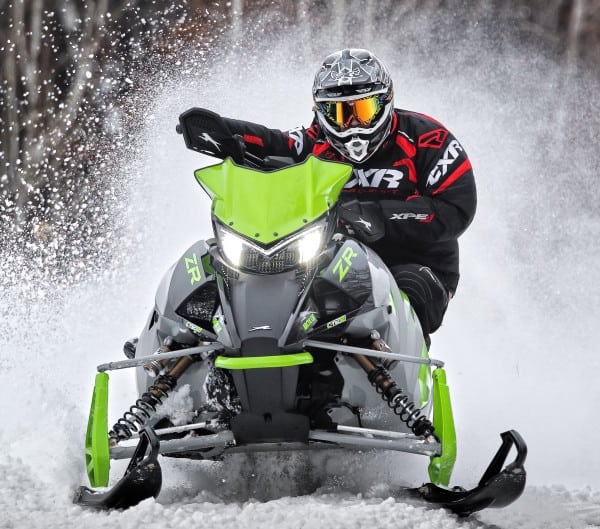 Refined…if there’s one word that best describes the much-anticipated replacement to Arctic Cat’s Suzuki 800 two-stroke this is it. After indications pointed towards the release of the all-new motor for model year 2017 were quelled last spring, Arctic Cat has finally unleashed their next big thing…and by all indications its was worth the wait.

The new C-TEC2 800 represents Arctic Cat’s second proprietary snowmobile engine built at their St. Cloud, Minnesota powertrain facility. The first of course was the C-TEC2 600, which by all indications, after nearly two full seasons on snow in consumer hands has been nothing short of a knock-it-out-of-the-park home run. Developing an engine from the ground up is a daunting task to say the least, having it be the company’s first comes with even greater challenges. But much to the credit of Arctic Cat and its powertrain engineers, the dual stage injected engine has lived up to the power, durability and efficiency claims Arctic Cat made when it was launched.

At first glance the new C-TEC2 800 appears to be a near identical clone to the smaller 600 displacement mill. But upon closer inspection the bigger brother motor touts unique attributes making it even better.

Not surprisingly, the new 800 engine shares a great deal of architecture with its 600 sibling and brings with it more power, more torque and greater efficiency than the soon to be retired Suzuki 800. Of course, only time will assure us it will also emulate the same level of durability of the smaller C-TEC2 as well.

It was this all-important attribute in mind as to why Arctic Cat most likely held back the 800 until the 2018 model year. According to Arctic Cat snowmobile General Manager Erik Nelson, who appeared very transparent while talking about the current and future vision of Arctic Cat snowmobiles, Arctic Cat simply will not release any new product, regardless of how great consumer demand is, until it is ready. And after an afternoon spent riding the new 800 motor in the mid-season release ZR 8000 Sno Pro, we can comfortably say, this one is ready.

For those hoping for a mega horsepower twin from Cat, the debut of the C-TEC2 800 might be viewed at first glance as a miss. But we can attest this new motor delivers more in every key category and does so with a level of precision and instant response that is heads and shoulders above the 800 of old.

Producing 160-horsepower, the new engine pumps power at or near the top of the much coveted big bore category. But there is more to the new C-TEC2 800 than peak power; with an 18% increase in mid-range torque and a heathy 36% increase in low-end torque, the new engine delivers the kind of grunt, acceleration and response that should make both trail riders and powder hounds nod with approval.

To achieve these gains and still retain run quality and reliability, Arctic Cat engineers utilized many of the same technologies found in the C-TEC2 600 such as dual stage injection, slotted piston induction and electronically controlled oil metering. They then mated them to new technologies exclusive to the new 800 motor.

The boost in power and response is a result in large part to a new Arctic Power Valve system which features three-stage, electronically controlled exhaust valves for the primary port and auxiliary ports. A traditional guillotine valve is used for the primary port while unique rotating “half-moon” valves are used for the auxiliary side ports. The entire power valve system is precisely controlled electronically based upon a host of parameters including pipe temperature, barometric pressure and throttle position to name just a few.

Other new technology in the mix includes larger 50-mm throttle bodies mated with new 4-petal, “W” shaped reed cages for optimum air-flow and response; a new fuel-rail damper designed to absorb injector pulses allowing for consistent and accurate calibration and fuel delivery; and a new single plug combustion chamber that has been optimized for both power and efficiency.

While our time spent with the new motor was very limited at this writing, we can say with certainty the new C-TEC2 800 is better in every way compared to the 800 it replaces. Gone is the burble and stumble sometimes found with Suzuki 800 and in its place is a more crisp, more responsive, and more rev friendly motor with gobs of torque. The motor simply feels happier, with a quick to rev demeanor that satisfies with plenty of power. Adding to this, the motor is more efficient as well with a claimed 30% reduction in oil consumption and fuel economy that we suspect will be slightly better than the 800 Suzuki and on-par with other 800 class competitors.