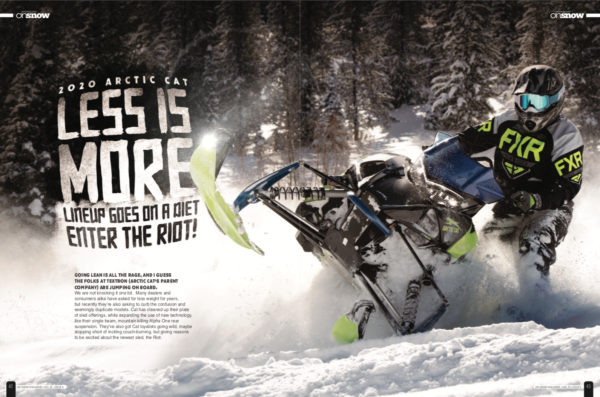 The Riot is just that, a new crossoversled with lots of attitude, and other than some close contenders, it is the most fun, new sled in the Arctic Cat lineup. Available in both 600cc and 800cc options, (6000 and 8000 CTEC 2 motors, and standard charcoal or upgraded chartreuse colors) the Riot replaces quite a few sleds in the Cat lineup. Gone are the High-country and Cross-country machines of the last fewyears in Cat’s crossovers. This is really where the Riot fits, in the 40-60 to 60-40on/off-trail segment of the market. The optional 15x146x1.35 Cobra track on the standard Riot keeps this sled more trail centered, but the 15x146x1.6 gives it a little more off-trail capability.

The standard Riot 6000 and 8000 slice out a segment of the market that ride mostly trail, but aspire to be off-trail riders.It’s got oodles of stellar standard positives,like the new 146-inch Cross-Action rear suspension (on all Riot models). This un- coupled suspension works like you would think, with more transfer on acceleration,and there’s a Fox 2.0 ZERO QS3 shock inthe rear on the more wild hi-vis colorway, which makes it even better.

The ARS II front suspension has brandnew forged aluminum spindles for 2020 on the Riot, and there is an added 1.5 inches of clearance, new upper arms, new feel,and a standard sway bar which means flatcornering in the trails. The standard Riothas the trail-oriented, adjustable ski stance from 42-43 inches, and there’s reinforcedrunning boards for taking this thing off bigjumps and handling hard moguls. There’salso a rear rack standard.

Replacing more of the High-Country market segment from years past in the Cat lineup is the Riot X 8000. A notable differ- ence right away is the lack of a windshield. This makes is easier to roll-over when stuck on a big side-hill, but also decreases protection from the elements. New A-armsmade out of super fancy ‘dual-phase-alloy- steel’ don the front end. Most mountain guys will just care that these parts arelighter than previous ones. The X model has the Arctic Mountain Suspension (AMS) with a 27-degree spindle caster angle for better predictability in side-hillingscenarios. There’s also the G2 ProClimb 7 mountain ski that was developed along with the Alpha One mountain sled for off- trail performance. The Riot gets a Chal- lenger track with a 2.0-inch lug on it as well for deeper snow capability. 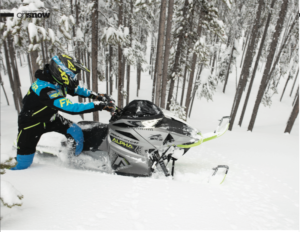 No, there is not a previously unreleased Alpha 3 model… sorry for the buzzkill, but there are 3 models of mountain machines from Cat for 2020, all with the Alpha One single beam rear suspension. Like otherareas of Cat’s lineup, there are changesand slimming in the mountain segment. Again, this is a good thing here. You get the 8000 Ctec2 powered Alpha One, the Mountain Cat Alpha One, and the standard Alpha One this year.

What sets the Hardcore apart from the others as the top mountain sled from Cat is the cost… kidding, kind of. Actually, this was a sled that many seasoned mountainriders asked for last year. In the Ascender platform, (Cat’s newest mountain chassis)this sled has the upgraded Fox 1.5 ZeroQS3 coil-over shocks, except for the rear

shock, which is the QSL lock-out shock. Easily adjustable, and a wide range of ca- pability, these shocks are the main reason the Hardcore is the top sled in the lineup. Plus, it has the reinforced running boardsand plenty other options. There’s a nar-rower 42.5-44.5-inch adjust stance up frontas well. The Mountain Cat does not get the extra reinforcements, but comes with verycapable Fox Float QS3 shocks. While thestandard Alpha-One comes with the CatIFP gas shocks.

There was a lot of attrition across
the line at Cat this year, and the mountain segment was not spared. There is no more King Cat, no more 4-strokes in the mountain. Plus, there is not a Mountain Cat Sno Pro, or any 600cc option for
the mountains.