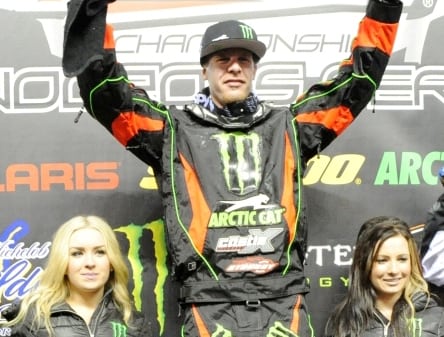 For the second time in the still-young 2012 ISOC National snocross season, Tucker Hibbert proved the power of the Arctic Cat ProCross chassis with a spectacular win in Pro Open final in Shakopee, Minn. The Arctic Cat/Monster Energy phenom delivered a jaw-dropping, come-from-behind performance that brought 12,000 screaming fans to their feet and highlighted his insatiable desire to win.

“That was one of the all-time great displays of power, determination and talent,” said Mike Kloety, Team Arctic Race Manager. “Tucker proved once again that he’s an incredible champion, and that the 2012 Arctic Cat Sno Pro 600 is destined for greatness.”

Joining Hibbert on the top step of the podium at the Canterbury snocross were Team Arctic pilots Tyler Adams, Trent Wittwer, Reid Runkel and Evan Christian. Adams continued his season-long quest to rule the Junior classes by taking the win in Jr. 14-15 and finishing second in Jr. 16-17. Wittwer’s victory in Jr. Novice 10-13 was his second of the season, further confirming his immense talent and drive. Runkel led a Team Arctic-sweep of the Transition Limited final, while Christian dominated the 120 Champ class.

Canterbury Park in Shakopee marked the third stop of the eight-race ISOC National Tour. With nearly a month until the next event, Feb. 3-4 in Farmington, NY, Team Arctic racers and crews will continue to test and improve the new race sled.

“We’ve seen significant progress with the new Sno Pro,” said Kloety. “Much of the improvement is simply getting more seat time with the new chassis. But we’re also learning improvements in calibration for specific conditions, which is a necessary process every time we introduce a new chassis.”

For more information on Team Arctic’s 2012 season, go to www.arcticcat.com