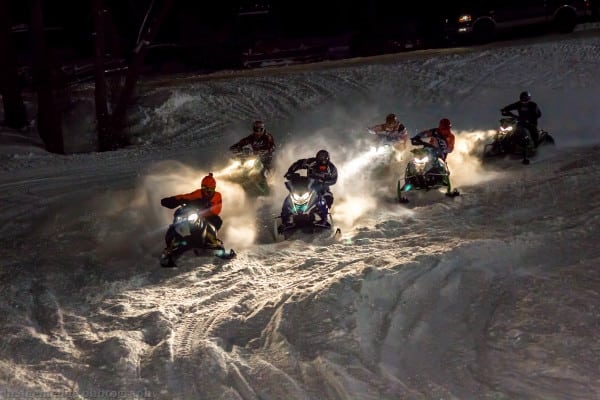 Some may call it a vision, but for Elk River businessmen Todd Plaisted and Chris Carlson, the idea to create ERX Motor Park was fueled more on passion and less on business acumen. This is not to say the two lacked the latter, quite the contrary. In fact, both are owners of highly successful businesses, Todd operating his namesake dirt works/landscaping organization Plaisted Companies, and Chris being the man behind the innovative powersports aftermarket supplier Sportech Incorporated. While both share the same kind of drive and business intellect needed to build and grow their respective companies, they also share a love of racing and anything having a motor.

Perhaps more importantly, both men possess the ability to dream big and to make those dreams reality. And dream they did. From an abandoned bituminous plant located adjacent to Highway 169 on the outskirts of Elk River, ERX Motor Park was born and has grown to become what is now widely regarded as the Midwest’s premiere motorsports park.

There’s something special about the vibe at ERX, and it’s this ethereal energy fueling the continuing growth of the venue’s fan base.

“Neither of us had this grand motorsports park vision in our head when we first purchased the land,” said Carlson, thinking back to when ground was first broken at ERX. “Like most parents with kids in school, they (the kids) were our focus, and we were looking for a place for our children to enjoy and improve their racing skills. Most communities have hockey rinks and ball fields, but our kids were into racing, and this was an opportunity to build a practice facility and create a place for our families and the entire community to enjoy.”

The partnership between Chris and Todd was in many ways a perfect match, Chris and his family were actively involved in snocross racing and the powersports industry, and Todd, who’s two boys were also bitten by the racing bug, possessed the knowledge, equipment and manpower required to transform the abandoned tract of land.

“Giving back and being involved in the local community has always been important for both of us,” said Todd. “Elk River is home to our families and our businesses, and I’m proud to say ERX has become an integral part of the greater Elk River area.”

Last summer, after spending the better part of the year sculpting and transforming the landscape, ERX unveiled a sweeping and undulating world-class track for the Off-Road Championships (TORC) series.

As word spread of the impending motorsports park, others within the powersports community pledged to help, however they could.

“More than anything, I think the passion of those involved in powersports is what has fueled our success,” said Todd. “Obviously, Chris and I have invested heavily in the park, but it has been the racers, families, and volunteers who have stepped forward and wanted to be a part of this project that have really made a difference.”

Aside from a few paid staff members, the heart and soul of ERX beats from the enthusiasm of hundreds of volunteers who dedicate their time and expertise wherever and whenever they can. From parking attendants to flaggers to scoring officials to announcers and many others, ERX is as much about the people who keep it ticking year-round, as it is the racing on the track.

Still, no racing facility would be complete without racers, and ERX has carved out a uniquely competitive niche. While other race circuits look to appeal to the top level of competition, Chris and Todd looked to create a racing home for the “everyman racer”.

“If you’re involved in powersports in any way, chances are you have a competitive side,” said Chris. “We thought, why not develop a racing environment that opens the doors to the grassroots racer…a place where anyone can race on whatever type of snowmobile, car, truck, ATV or side-by-side you might have in your garage?”

Professional automotive racing returned to the Twin Cities last summer after a long hiatus. The TORC series didn’t’ disappoint the thousands in attendance, and the Carlson and Plaisted families were rewarded for their hard work, as Chris’s son Andrew took home his first ever TORC win in the Pro Light division. This year, ERX will host two full weekends of TORC racing with the first race in early June.

The concept became an instant hit and grassroots racing at ERX took off like wildfire. “Suddenly, we went from a practice facility to a community gathering spot for racers and their families,” said Todd.

Soon the Thursday night grassroots snocross racing series was attracting a record number of racers, outpacing regional circuits and their more traditional weekend events. The “run-what-you-brung”, family friendly, just have fun atmosphere was a hit, and racers and their families were soon calling ERX their home.

Knowing snocross was always going to part of the ERX mix during the winter months, Chris, Todd and a group of ERX volunteers looked for ways to generate the same type of success during the summer as well. While traditional ideas such as motocross were tried initially, it was another non-traditional idea that took hold.

It was a day of smiles and success last summer as ERX co-owners Todd Plaisted (left) and Chris Carlson (right) enjoyed a day of TORC truck racing at their recently expanded ERX facility.

“We had heard of an annual event in Brainerd, Minnesota held during their county fair, that for lack of a better explanation, combined demolition derby, car racing and motocross into one,” Carlson recalled. “We researched it further, developed our own set of rules, and not long after, Beatercross was born.”

Featuring compact cars and trucks, racing on a closed dirt course with banked corners and jumps, the idea was just crazy enough, and perhaps more importantly, affordable enough for racers to work…and it did.

Of course, with success comes growth, and ERX has experienced plenty over the past 10 years. Beyond the charm of grassroots racing, ERX has featured some of biggest motorsports events in the Midwest including national and regional snocross, internationally recognized Red Bull Snow Boundaries competition, and just last summer, The Off-Road Championship (TORC), a professional closed course truck race, making its first appearance ever in the Twin Cities. The facility has also expanded to non-racing events and has included Run with the Bulls, color runs, and scores of community charitable events such as Day of the Dozer, concert fund raisers, and Feed My Starving Children mobile pack events.

ERX has become a social hang-out for all motorsports enthusiasts; a place to be and be seen, even when not racing, as evidenced by this goodtime hangout during the 2017 Red Bull Snow Boundaries event.

The facility itself has grown as well, expanding beyond the initial 13-acres to a sprawling 400 acres. With the added space have come additional features, most notable of which is a world-class short course, off-road track, carved into the undulating terrain and heavy woods. Also added was a snocross track built specifically for kids, a lawn mower and go-cart track, wooded trails ideal for demo rides and photo/video shoots, as well as expanded parking, pits, and facility improvements.

“It’s hard to believe it’s coming up on 10-years already,” said Todd, reflecting on the facilities approaching anniversary. “It’s a lot of work, but we’re both still having fun and that’s the important thing.”

They say rubbing is racing, and if that true, there is no truer form of racing than the ERX exclusive Beatercross series held throughout the summer months.

Giving back to the community has become as much a part of ERX as racing. Each fall the venue hosts Day of the Dozers, a day-long event that allows kids to get behind the controls of heavy equipment, under the guidance of professional operators, while raising money for Children’s Hospitals and Clinics of Minnesota.

Last winter ERX hosted one of the most talked about and successful snowmobile competitions. The Red Bull Snow Boundaries event followed the ERX mold of grassroots racing, giving riders of every caliber a chance to compete on a grueling closed loop, 7-mile cross country loop.

The inspiration to create a venue that caters to racers of all ages and abilities lives strong each December when ERX hosts a Learn 2 Ride Snocross Clinic. The multi-part clinic features many of today’s top racers including Chris Carlson’s son and Pro-Open rider Andrew Carlson, seen here coaching and inspiring the racers of tomorrow.

Armed with the facilities own snow making equipment, heavy equipment, two groomers and an army of volunteers passionate about snocross, ERX is home to one of the biggest and best snocross tracks in North America, and proved to have the mettle to host one of the best ISOC National events in recent memory.