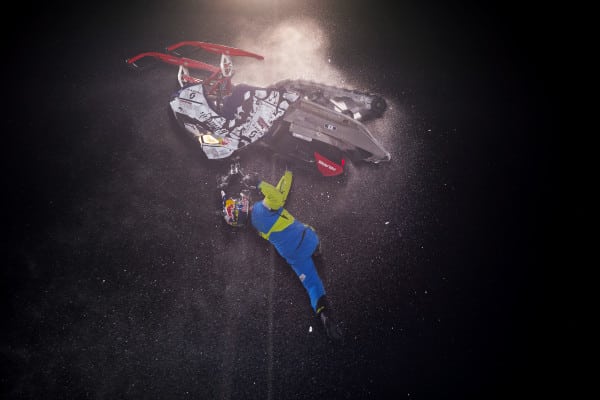 It was most likely just a matter of time before the news came down that ESPN would cancel some of the “trick” elements of Winter and Summer X after the tragic death of Caleb Moore. The official word came down today…here it is from the ESPN mouth:

The decision to discontinue the Best Trick events follows, but is not directly tied to, an investigation into the death of Snowmobile Best Trick competitor Caleb Moore in January, according to an ESPN spokesman.

Moore died of head and heart injuries sustained during the Snowmobile Freestyle competition at X Games Aspen 2013, where he under-rotated a backflip attempt and crumpled under the weight of his tumbling snowmobile. A Freestyle Snowmobile demonstration previously scheduled for next week at X Games Tignes in France had previously been canceled a month before Tuesday’s announcement.

“Moto X Best Trick and Snowmobile Best Trick were not dropped in response to what happened in Aspen,” an ESPN spokesman said. “This decision was under consideration before Aspen, and, in fact, our review of Snowmobile Freestyle continues.”

ESPN released a statement saying, “This change reflects our decision to focus on motor sports disciplines which feature athletes who also compete in multiple, world-class competitions [e.g., professional events and tours] reflecting the highest degree of athlete participation, competitive development and the global nature of our X Games franchise. Over the past 18 years we have made more than 60 changes to our competition lineups at X Games events to capture the evolution of the sport and these continue that growth.”

The Moto X Best Trick competition at X Games has driven progression in action sports since 2001, when Mike Jones became the first to land a trick on snow where the rider gets inverted, kicking his feet high in the air while hanging on to his handlebars (known to competitors as the “Kiss of Death”) at Winter X Games in Mount Snow, Vt. Travis Pastrana electrified the audience inside the Staples Center in Los Angeles in 2006 with the first-ever double backflip, Kyle Loza won gold in 2009 with his “Electric Doom” body varial, and Australian rider Jackson “Jacko” Strong brought the first front flip in 2011.

“Best trick was my favorite event both as a competitor and a spectator,” said Pastrana, an 11-time X Games gold medalist who won Moto X Best Trick at X Games Los Angeles in 2006. “It was a staple of progression in FMX but also the most risky part of it. A lot of athletes would cross from other disciplines or learn a special skill specifically for best trick. Usually these athletes were capable of landing their trick in a foam pit or on special set up but under pressure, they rarely did which added to the dangerousness of it. Either way I was a fan of this event and will be sad to see it go.”

Yet it’s also been one of the most dangerous events from the beginning. Carey Hart crashed a backflip attempt during the event at X Games 7 in Philadelphia, also in 2001, breaking several bones.

“Progression in these sports obviously comes with more risk,” the network said. “Nobody can eliminate risk in its entirety, but what we can do is focus on providing world-class events that are as safe and organized as possible.”