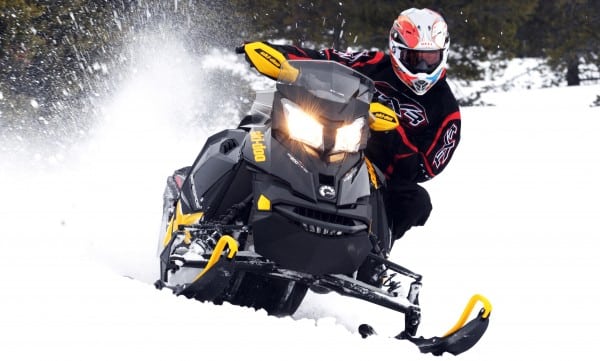 In stretched 137-inch form, the r-Motion skid is, dare we say, even better than its shorter sibling.

While nearly every snowmobile magazine and a few fly-by-night websites have a chance to ride and photograph all the new models during the industry Snow Shoot event, which was held this past March in West Yellowstone, Montana, the On Snow crew did one better. With the decals still warm and the powder coat fresh, we had the opportunity to ride the new 2013 Ski-doo Renegade X model, complete with new XS bodywork and 137-inch r-Motion suspension for an extended weekend rally. You can check out the “Twenty-13” feature elsewhere in this issue to learn about the details but after logging nearly 350 miles we can assuredly mark the new XS Renegade X as a crossover class winner next winter. Just as r-Motion transformed the already terrain champ MXZ-X into an even more dominant version of its former self, the stretched 137-inch version does so to an even greater degree. Our particular unit was equipped with the Quick Adjust system and once we dialed in the rear skid, the “longer” r-motion suspension delivered an even better ride than its short track sibling. The new rear suspension seems to give the Renegade greater balance then previous, although the larger and slightly more aggressive track contact area found on the Renegade, did deliver a slight hint of unwanted push in tight trails compared to the 2012 MXZ-X that accompanied us. Most impressive is the rising rate skid’s ability to deliver a controlled and comfortable ride with little to no adjustment. What’s more, the new XS chassis delivers a few welcomed additions, most notable being the heated, easy access glove box; a standard temp gauge which proved handy while riding on icy early morning spring trails; and the LED taillight glowed brightly through dense, late night snow dust. 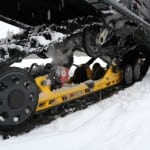 In stretched 137-inch form, the r-Motion skid is, dare we say, even better than its shorter sibling. 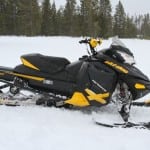 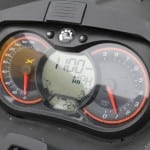 A new faceplate and an above gauge storage box highlight the view over the bars. 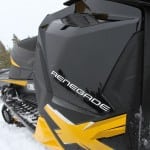 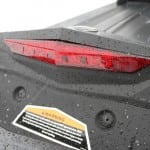 The “Gade” and other performance Ski-doo models go LED for 2013. 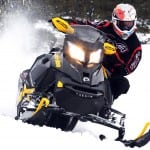