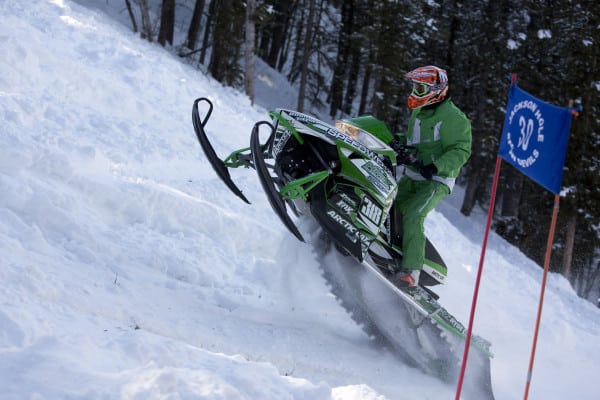 If you’re a snowmobile hillclimb racer the Jackson Hole World Championships are the  one place you want to win. There may be steeper climbs or gnarlier courses, but none combine all the most extreme aspects of hillclimbing like Jackson Hole. And nowhere else is the competition so fierce. You gotta lay down the run of a lifetime just to get to Sunday’s finals. Going over the top at Jackson? That’s a feather in the cap of most hillclimbers. A World Championship? That’s something to stake your racing career on.

Starting from it’s base, the run up Snow King sends competitors toward the summit at a dizzying 45-degree angle along a 1,500 foot course lined with a series of gates and littered with ruts, huge craters, natural obstacles and massive moguls.

At Jackson you want power to get up the hill, but that power doesn’t mean squat if your suspension doesn’t work. And suspension means carving a path through the gates and soaking up the nasty holes on the way up the hill. One of the keys to a good suspension setup is good shocks, and FOX proved again this year that it knows how to put together a winning setup for Jackson. Want proof? Take Kyle Tapio – he won Open Mod, Improved Stock King, King of Mod and the coveted King of Kings titles at Jackson. His shocks? FOX, of course.

“The advantage FOX has is adjustability,” said FOX Powersports Racing Manager Rick Strobel. “That hill at Jackson is totally different from the start of the World Championship on Friday to Sunday when they have the finals. But our guys can adjust to the conditions simply by changing air pressures. It’s that simple.”

FOX Takes Adjustability To The Mountain – Hillclimbing is about as extreme as any sport gets and most mountain riders don’t face the same types of challenges as the competitors at Jackson Hole. But mountain riders need the same level of adjustabilty from their suspension as top-level hillclimbers because, just like at the hillclimbs, conditions change for the average mountain rider throughout the day. You may have to ride a long section of trail to get to where you drop off into your favorite riding area. Or the snow may be set up in the morning and get softer as the day goes on. FOX adjustability allows riders to change air pressure to suit the conditions. All it takes is a few minutes to change a setup from bumpy trail or hardpack to the soft stuff. It’s a level of tunability you just can’t get with a conventional spring and shock package. Also, weight is king in the mountains and FOX FLOAT shocks are pounds lighter than even the lightest spring/shock setup.