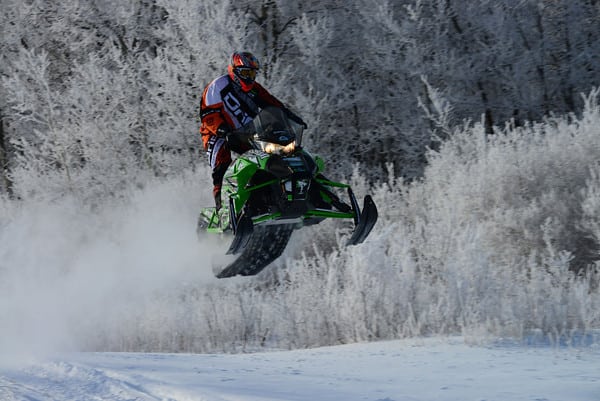 The 40th running of the I-500 cross-country snowmobile race pitted some of the fastest snowmobile racers in the world not only against each other, but also against the brutal terrain of Minnesota’s northland in the heart of winter. A true test of man, machine, and suspension; riders competed in snow-filled ditches, fields, unplowed roads and on frozen rivers in pursuit of one of the most prestigious and coveted wins in all of snowmobiling.

Arctic Cat rider Ryan Simons set the pace each of the three days of the event held in and around the town of Thief River Falls, Minnesota. Each day, riders set out on a new series of loops that amount to roughly 160-miles each day. By Day 2 Simons had opened a 10-minute lead on the rest of the Pro 600 field, a lead he would take to the finish and the win on Day 3.

The list of ingredients needed to just compete, let alone win in long distance terrain battles like the I-500 is lengthy. Near the top are premium suspension components and calibrations backed by “been there, done that” tuning knowledge. It should be no surprise Simons’ winning sled was equipped with FOX shocks.

Long distance terrain races are nothing new for FOX; the company has been deeply involved in off-road distance racing for many years. However, Simons’ run to the I-500 win is noteworthy from a suspension standpoint. Off-road trophy trucks are million dollar race machines designed and built to traverse brutal desert terrain at extremely high speeds. FOX-equipped trophy trucks run an average of 55MPH in races such as the Baja 1000. Simons’ pace on day 2 of the I-500 was roughly 66MPH – that includes fuel stops and stop signs at various road crossings! Yes, that would leave a trophy truck in the dust.

Simply put, Simons’ pace down the ditches and rivers was almost mind-boggling this past January. Perhaps even more amazing is Simons’ suspension really isn’t much different from the FOX setups “Regular Joes” can run on every day trail sleds. While most of us don’t, and probably never will, ride at the race-winning pace Ryan Simons does, knowing you’ve got shocks with the quality and where-with-all that can is reason enough to consider FOX.