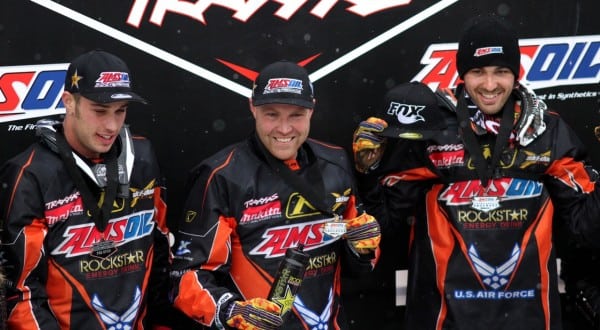 Now that the dust has settled and the barrage of news releases and stories form Duluth has subsided, we took a few moments to assess the results. It’s not just happenstance the podium box was swept by athletes using FOX shocks during the opening rounds of the International Series of Champions (ISOC) national snocross tour in Duluth, Minnesota.  As the recognized leader in ride dynamics, the journey to a podium sweep for FOX and its athletes starts well before the green flag unfurls at Duluth.

Aside from countless hours of development, research, and testing; FOX technicians are in the field, working directly with racers and their teams. In the weeks leading up to Duluth, FOX technician Mike Japp worked tirelessly to make sure FOX-equipped teams suspension setups were dialed in. It’s this sort of commitment that leads to the success shown at the opening race where FOX athlete Robbie Malinoski swept the Pro-Open rounds with a pair of wins, and was joined by his teammates in a Scheuring Speed Sports team-sweep of the podium.

FOX technician Mike Japp (right) worked directly with racers for weeks prior to Duluth. Dylan Hall reaped the rewards with a second place finish in Pro-Lite.

“We basically have three weeks to get ready for the season,” said Steve Scheuring, team owner and manager. “With our FOX shock package for example, we are able to run the same settings we ran last year because we know it works. That allows us to gain an advantage and focus on clutching and engine work. If you watched the race you saw the fastest sleds up that backstretch were all using FOX shocks. Every year I see teams on competing brand shocks and they’re constantly pulling their skids out trying to make their setup better and you can’t do that because you don’t know if its better or worse until the next race. That’s too late. FOX shocks are so consistently good we never change our settings more than a few clicks; no matter what the track conditions.”

So what does all this winning and preparation mean for you, the trail or mountain rider? It means you get consistent, predictable, all-day comfort and performance just like the Pros who race the National snocross series. And that makes for a good day of riding.

KASHIMA GOLD – Have you seen the gold “bling” on those high-end FOX FLOAT X EVOL shocks seen on all the big name racer sleds including Robbie Malinsoki, Ross Martin, and Tucker Hibbert? Turns out these guys not only have good fashion sense, but that sweet color of gold on their FOX shocks is doing more than looking good. The coating is called Kashima Coat, and along with its distinctive gold color, the coating is buttery-smooth, hard-as-nails durable and helps to deliver an exceptionally smooth feel. By reducing friction within the shock, riders can feel a tangible improvement in suspension performance. All the top guys in the big national circuits are using the stuff, including free-ride mountain athletes like Chris Burandt and Dan Adams. Heck, FOX has had such good results with the stuff they even use it on all their Factory Series mountain bike forks and shocks. The really cool news is now you can get the Kashima coating upgrade for your own FLOAT X EVOL or Float R Evol shocks.

Check out the Kashima Upgrade Page to learn how, and while you are there watch the Kashima Video.