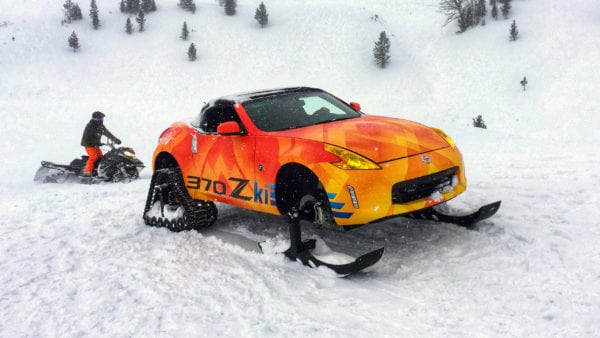 The popularity of the Ski-Doo Elite and the vehicle’s two-seater, open cockpit design has intrigued sledders for the better part of 40-years. So much so, Ski-Doo resurrected the design on three different occasions. The last version was the most refined and powerful, with four-stroke power giving the twin-tracker, bucket seat buggy enough thrust to exceed 80mph on the hard pack. However, after getting a glimpse of the latest concept from Nissan, Ski-Doo can possibly shelve the Elite for good. Based on a 370Z roadster, the car was shown to plenty of eye gawkers during the Chicago Auto Show this past February and it immediately captured the imagination of would be winter explorers. With a 332-horsepower V6 under hood, the 370Zki touts a track kit from American Track Truck out back, oversized skis up front, and a 3-inch lift kit to make room for the snow ready equipment.