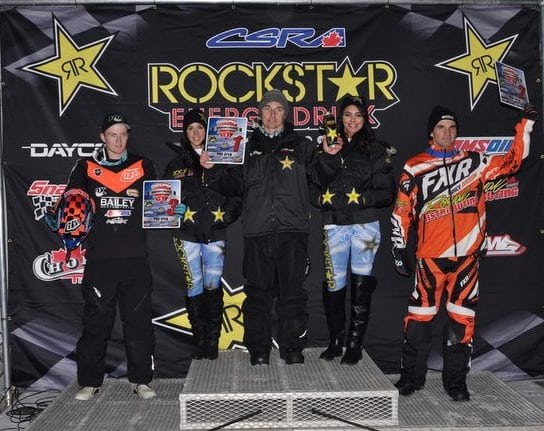 In front of over 3000 fans this past weekend, Iain Hayden defending Pro Open Champ, hammered down and secured podium finishes in his heats and finals all-the-while continuing to hunt for the title. We caught up with Team Rockstar Energy Polaris Racing and got the full scoop.  Below is the official press release from the weekend.

(Vaughn, ON January 20th, 2015)  The fifth edition of the International Snowcross Grand Prix was held this past weekend in Rouyn-Noranda, QC in front of more than 3,000 spectators who came to witness drivers from across Ontario, Quebec, and the U.S. battle for supremacy at Round 2 of the Rockstar Energy Drink CSRA Snowcross Nationals.

Although he seemed to be a bit tentative on both days, defending Pro Open Champion Iain Hayden still rose to the occasion by nailing down impressive podium finishes in his heats and finals, building on his current points lead in the title hunt.

In Saturday’s Pro Open heats, Hayden managed to deliver 4-3 results even though he struggled to get decent starts, which left him with catch-up races. He regrouped for the final, however, deftly nailing down the holeshot and taking first place all the way to the finish line for the win.

Hayden’s results in Sunday’s races proved to be similar to the day before. This time he recorded 4-1 heat finishes. In the final, he got off to a quick start, drag racing with former teammate Lee Butler for the holeshot, which Butler managed to grab by diving low in front of Hayden. Despite offering a number of challenges for the lead, Hayden was unable to stick a pass on Butler and the reigning champ settled for second at the finish line.

“We seemed to be dragging our heels a bit after the holiday season break, but things turned out okay, especially in the finals. If nothing else it was a consistent weekend for me,” Hayden said.

Hayden’s Pro Open teammate Dylan Hall was also a bit slow getting off the mark in his heats on Saturday. Biting the bullet, he still managed to log not too shabby 4-4 results. A mediocre start in the final saw him put his head down and methodically work his way through the field to manoeuvre his way into the top five. ‘Four’ seemed to be the magic number for Hall on day one, as he would claim that finish position in the final as well.

A mechanical gremlin put Hall on the sidelines in his first heat on Sunday. The gremlin haunted Hall in his second heat, also, which he managed to finish at the back of the pack. Despite a poor gate pick for the final, Hall was able to round the first turn in fifth place, a position he would keep throughout the race and take to the finish line.

“It wasn’t the best weekend for me, but I can live with the results from both days, as I know I gave it my best shot,” Hall said.

In Pro Lite action, Team Rockstar Energy Polaris Racing’s Jacob Rosko-Fong also had some problems finding his groove getting off the start line. Playing catch-up was the order of the day in his heats and final on Saturday; 5-5-6 finishes would be the results of his efforts.

On Sunday Rosko-Fong’s heat races transpired a lot better than the day before, with the Kirkland Lake native snaring second place in both heats. The final was a bit more of a challenge again, however, and an eighth place finish would be all that could be produced by the end of the race.

“Starts were a bit of an issue for me this weekend and passing wasn’t all that easy. Sunday’s heat races went well, but in the final I found myself towards the back of the pack once again and getting up into eighth was as good as it got,” Rosko-Fong said.

The Rockstar Energy Drink CSRA Canadian Snowcross Championship series resumes on February 7/8 with the running of the Kawartha Cup in Lindsay, ON.