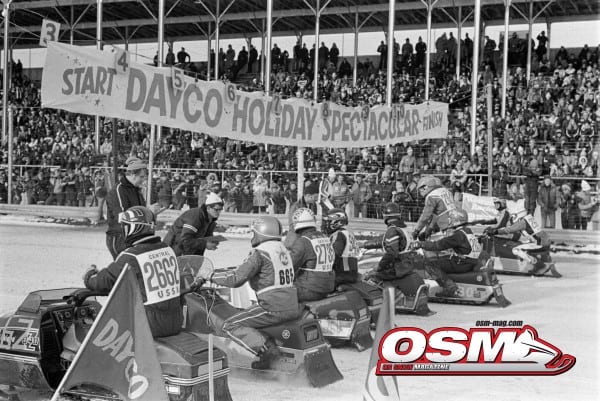 During the heyday of ice oval racing in the mid 1970s, the ice tracks where these warriors of winter competed became hallowed grounds and the towns which hosted them became household names within the snowmobile community. Still today mention of such communities including Eagle River, Ironwood, and Beausejour, many of which still host snowmobile races today, brings back vivid memories of incredible races, last lap passes, horrific crashes, and some of the most storied racing legends the sport has ever had. One of those tracks was nestled in the western Minnesota community of Alexandria. The event was called the Dayco Holiday Spectacular, and its large half-mile track created some incredible racing. The roar of the engines disappeared after 1984, but thanks to a group of upstart local snowmobile enthusiasts in the area, the Spectacular is poised to return this winter (January 30 – February 1, 2014). There’s lots of work to be done, but a combination of a resurgence of oval racing and the memories of the fabled track has the Midwest snowmobile community buzzing with anticipation. Here’s a promo video from the kids responsible for the return of the Spectacular. Learn more at www.alexwinterspectacular.com