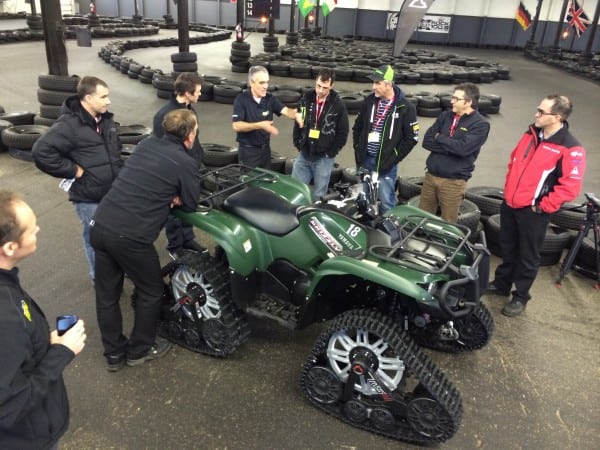 Track conversions for ATV and side-x-side vehicles is nothing new, in fact our pals at Kimpex have been leaders in the tire to track technology and are considered pioneers in the category. While the systems have greatly improved they have remained primarily a creature of utility. However Kimpex is looking to change that with an all new track system dubbed the RS4.

The new Commander RS4 looks to smash the barriers associated with traditional track conversions with a system that delivers greatly increased speeds and precise control. According to Kimpex engineers, the new RS4 will attain speeds up to 85% of a wheeled ATV, and thanks to an all new design, which Kimpex proudly boasts holds 4 all-new patents, handling and control are like no other track conversion system.

A large, oversized aluminum sprocket with replaceable plastic teeth is the center piece of the RS4 system. An 8-inch wide track will come standard with integrated studs, and a unique flexible guide rail provides bump absorption for a smooth ride. The “tipped-up” track geometry decreases the contact patch area on hard-pack for reduced steering effort.

We had a chance to sample the new RS4  this past week in Quebec City. While we were unable to try out the tracks on snow (the surface the RS4 was primarily developed for), our initial impressions were amazing. All three ATVs we sampled with the RS4 were fast, stable, and most importantly offered up precise handling. The lumbering and sluggish feeling of a traditional track system was no where to be found. The system accelerated like it was on wheels and dare we say… the riding experience was (gulp) fun, something we never had experienced previously with a track conversion kit. If these same qualities exist when we get to sample the RS4 on snow, Kimpex has a winner on their hands.

The RS4 track kit will be available December 10, 2014 and will retail $ 4995, attachment included. To find a Commander retailer and to learn more about the RS4 system, visit www.commandertrackkit.com