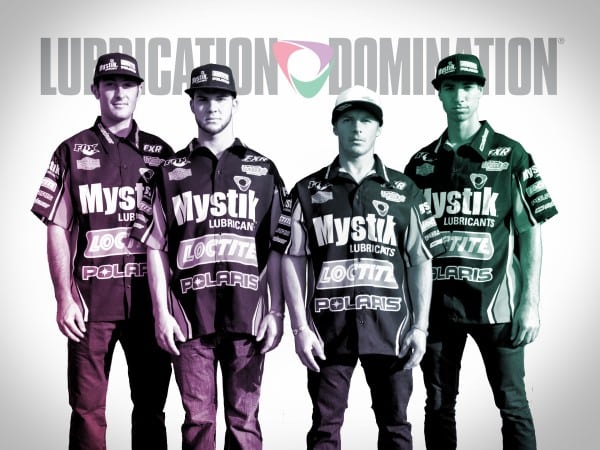 Take a good look at this photo…aside from them needing a tan and step by step instructions on how to put a good old fashioned curl in the brim of their hats, this gaggle of racers are all backed by relative lubricant newcomer to the snowmobile scene – Mystik. Why the boys (left to right Lieders, Scott, LaVallee, and Pallin) do their best to look tough for the cameras, we know where these guys are truly at their best is on the track. With Duluth National coming this weekend, their first test of the season is less than a week away. Here is the official release from the corporate offices of Mystik:

“We are honored that Team LaVallee will carry a history of success and pride into 2014 with Mystik Lubricants,” said Karl Schmidt, general manager of petrochemicals and lubricants for CITGO Petroleum Corporation. “The heights we have reached together over the past two years demonstrate the true essence of teamwork and a mutually successful partnership. Yet what we are most excited about is the future, which will not only showcase the dynamic talent of our team and our ever-improving products, but most importantly will serve as a daily dedication to our passionate fans.”

Headlining the team is LaVallee, five-time reigning ISOC Fan Favorite and world record holder for the longest snowmobile distance jump.  The team is extremely pleased to announce the return of Pro Riders, Kyle Pallin and Jake Scott for the upcoming season and excited to have the addition of Andy Lieders in the Pro Lite class. Last season, Pallin finished in the top ten of the Pro Open. Scott won the Pro Lite points championship last season after winning his final race at Lake Geneva, Wis. Lieders finished right behind Scott in second place overall in the Pro Lite points championship.

“Much like Team LaVallee, Mystik Lubricants are created with the goal of exceeding industry standards and dominating the competition, making us a perfect match,” said LaVallee.  “We have an exciting season in front of us, with the Winter X Games and a full Snocross Series that will put our machines to the ultimate test. Thankfully with the help of Mystik, our sleds run and feel great, giving us confidence and helping us stay ahead of the competition.”