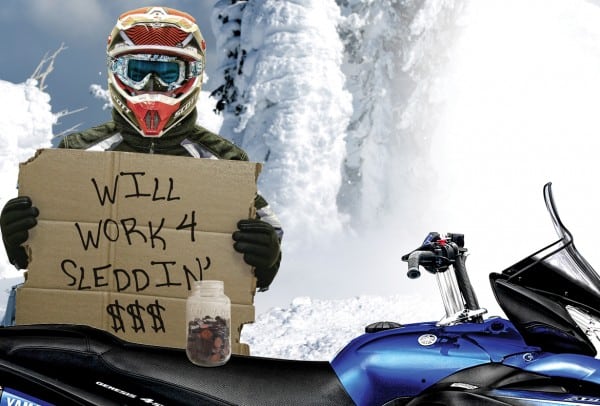 This past winter, we dug into the dollars and cents of snowmobile ownership in a feature story in our OSM In Season Issue (Volume 2, Number 4) titled Paying to Play. We got tons of feedback and plenty more suggestions on how to take the data a few steps further, which we intend to do. We’re going to republish the original story here in a 4-part series. Once the entire story has been posted, we’d love to hear more ideas, suggestions, and rants from you. Here’s Part 1:

Hey we know better than most, living the snowmobile lifestyle on a budget isn’t easy. But the addiction to the world’s greatest winter sport is simply too powerful to ignore or overcome, as are the advantages and performance capabilities of today’s latest crop of OEM iron. Every year during the peak of the fall buying frenzy, we are inundated with questions and opinions regarding the cost of today’s new buggies. From price shopping to sticker shock, we hear it all.

Online forums probably bring out the worst fanners of the flame, with posts of price shocked would be buyers, willing to drive hundreds of miles to save a few bucks; or arm chair product manager and bean counters, making arguments void of fact or experience attempting to explain what is an exorbitant cost in their mind.

Nearly all of these rants fail to recognize the cost of ownership goes far beyond the MSRP. With that in mind, the OSM crew began to collect and determine the true cost of ownership of a modern snowmobile. From common replacement parts and accessories, to factory recommended service, to fuel and oil usage, we kept tabs for an entire season, talked to several dealers, and based our final numbers on an average 1,500 miles per season over a two year period.

Our intent was not to pick a winner or a loser, but rather illustrate snowmobile price alone shouldn’t be viewed in a vacuum. For sake of consistency and ease of accumulation of data, all numbers are United States based. While Canadian values obviously will vary, we suspect the differences and patterns will mirror those found here.

The models selected were what we deemed to be middle of the pack of the most popular category of trail sleds for 2012 – the 800s. While it’s impossible to find four sleds that are virtually equal in components and features, we feel these four are closely matched in terms of power, shock and suspension components, and features such as electric start.

Obviously each sled could be purchased for slightly less or in some cases more than the manufacturer’s recommended retail price, but using MSRP as our base line is the most fair and consistent method for this exercise. In this trio, the Apex is starting out at clear disadvantage to the tune of $2,000-plus versus the others. However if you plan on keeping the sled longer than two years, driving it far greater than 1,500 miles a season, the tables can turn real quick.

In talking with other riders and dealers, and based upon our own experience, the list of replacement parts or accessories are some of the most common items every snowmobiler will have on their new sled wish list. While some go fast ego jockeys may opt to stick with the low “showroom” windshield, in our neck of the woods where temps dip well below 0-degrees Fahrenheit on a daily basis, tall windshields are a necessity. Some may also argue a four-stroke or the Rotax E-Tec may never need plugs, however we still listed them for the sake of consistency. Note – both the Yamaha and Arctic Cat require four plugs versus two.