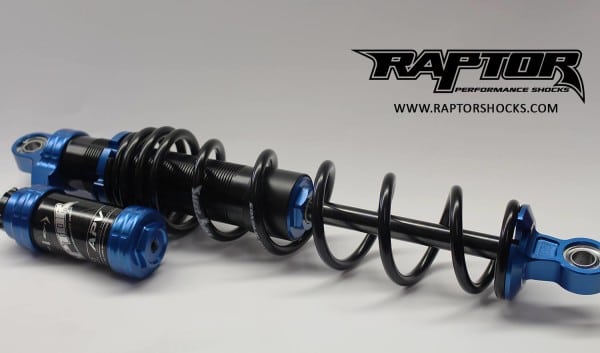 Our buds at Raptor Shocks located in Warroad, Minnesota are branching out to offer performance shocks to those of us who love to pound the bumps in the flats. OSM Editor Bourgeois used to work with owner Jake Anderson while at Polaris, and the two have a relationship dating back to the days when Anderson was a wrench at a local dealership and Bourgeois was still laying down his own hard earned fresh to buy new sleds. According to Bourgeois “Jake knows his s#$t.” As part of the effort to introduce Raptor Shocks to the Midwest and East, the company has teamed up with Cor PowerSports, a stepping stone cross-country circuit based out of Wisconsin, as a high level sponsor for the upcoming season. The boys and girls at Cor are pumped up about it as evident by their official release below.

With Hay Day’s closing in quickly we at Cor PowerSports are very excited to announce Raptor Performance Shocks as a new sponsor and partner for both the Cor PowerSports XC Series and Midwest Extreme Snowmobile Challenge for the 2016 season!

We all know when it comes to racing that you can make the most horsepower and have your clutching dialed but without having your shocks setup right all the hours put into testing of the other components won’t do anything to help get the power to the snow. Raptor Performance Shocks is a Midwest company based out of Warroad MN. With 25 years of high level suspension and shock development experience, owner Jake Anderson has an extensive knowledge of snowmobile suspension systems as well as shock design and tuning. Anderson spent 12 years working for Polaris Industries prior to starting Raptor in 2008 and has worked with all major shock manufactures over the years.

The Raptor brand has quickly established a strong hold in the western market and is very well known for exceptional ride and handling characteristics as well as outstanding customer service and support before and after the sale. Anderson says Raptor is excited to focus their attention on the Midwest and eastern markets “We’re excited to work right out of the back door at Raptor and focus our efforts on this new market! We’ve always had a fleet of short sleds here for testing year round so it’s a natural fit for the Raptor brand.” .

Cor PowerSports is very excited to partner not only with a company with the reputation of Raptor Shocks for building top tier suspension components for riders but to also partner with a fellow Midwest business. At Hay Days we will have two sleds on display with Raptor Shocks; the Polaris-365.com
Polaris Axys race sled and our own Yamaha Nytro race sled that will be the new promotional sled for the Midwest Extreme Triple Crown challenge.

Make sure to stop by the Cor PowerSports booth at Hay Days located at space EC1. For more information on Raptor Shocks please visit www.raptorshocks.com