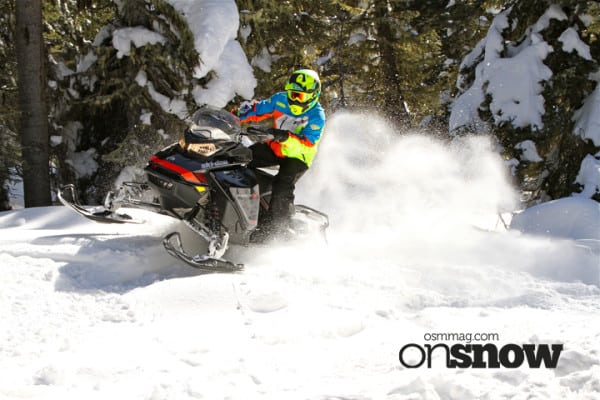 Acting like the market leader…that’s what Ski-Doo CEO and President Jose Boisjoli said was the mission for the company as they embarked on the development of the next generation REV platform. The mandate given to the development team behind the new snowmobile was to set the benchmark for the snowmobile riding experience.

“I asked the team to rethink the snowmobile from a blank sheet of paper,” said Boisjoli. “We are already the leader in the industry and we wanted to raise the bar another notch…this sled will make a statement in the industry.”

That statement is what Ski-Doo is calling the 4th generation REV platform or G4…an all new chassis that is narrower in every way and gives the rider far greater freedom of movement both forward and back as well as side to side. The chassis features a cast front bulkhead and a new tapered tunnel design. The entire vehicle is then wrapped in all new plastic blending classic design elements dating back to the Ski-Doo RV but is far narrower, sleeker and with greatly improved driver ergonomics in comparison to the previous REV-XS platform.

The fourth generation REV platform (dubbed the G4) takes rider-forward another step forward (no pun intended). The latest REV has the most rider active cockpit area we’ve ever sampled both in the Summit and the flatland catered MXZ and Renegade versions. This along with a quicker revving 850 engine has morphed the typically “planted” feeling of a Ski-Doo into a lighter, more playful driving experience.

There’s a lot of newness going on with new REV, in fact far too much to mention here (watch for a deep dive on the new Ski-Doo technology in an early fall issue of OSM) but the biggest is undoubtedly the motor. An all-new, second generation E-TEC motor that is more compact, narrower, and touts less rotating mass. Oh did we mention it’s also 850cc and produces a claimed 165-horsepower with an arm-stretching 106 foot-pounds of torque.

The new platform and motor won’t be limited to just one model either. Ski-Doo is launching the new platform in short track MXZ-X and TNT models; crossover Renegade-X and Renegade Adrenaline versions; and Summit-X and Summit-SP models for deep snow riders. What’s more, the new REV will not be limited to spring only models, as each category will have an in-season model available as well.

As for the chassis don’t let appearances fool you…this is a completely new design from the bulkhead to the tunnel. As previously mentioned the bulkhead is now cast, similar to the Polaris AXYS design. The tunnel is also all-new and features a tapered edge where the tunnel folds-over to create the top enclosure. Perhaps more impressive though is how the stamped tunnel creates the cooling cavity for the engine. Gone are all extruded coolers and in their place is the two-piece tunnel, which routs coolant down the entire length of the tunnel top in a hollow cavity, created by a “sandwiched” tunnel design.

The precise cornering characteristics of the REV are still intact, but only after you adapt your riding style slightly to accommodate the slide forward and over riding style versus the more traditional “knee-out and lean-out” approach we’ve been trained to perform for the past 25-plus years.

The key to what’s really new with the G4 platform really comes down to positioning or more accurately further centralizing mass and further emphasizing how the rider interacts with the vehicle. To achieve this the new REV touts a new 850 motor that is more compact than the 800 predecessor…about 1.6-inches narrower in total. This was accomplished in two key areas, a more compact magneto assembly and the use of a new pDrive primary clutch that is both narrower and much lighter (2.8lbs) than the TRA.

The new narrowed engine was then further centralized within the bulkhead by shifting the entire package to the right (as seated on the sled), putting the engine nearly perfectly centered within the centerline of the vehicle. To gain the needed space to shift the motor over, Ski-Doo also developed a much smaller exhaust silencer. When combined with the new bulkhead, the chassis is about 4-inches narrower across the central point of the engine (measured from drive clutch to exhaust silencer). This in turn allowed engineers to narrow up the body plastic by the same amount.

Perhaps even more noticeable though is how much narrower the sled is between the knees. Here the vehicle was narrowed by 6-inches, a difference you can truly see and feel from the saddle.

Several of our testers noticed a slight uneasy feeling with the G4 when entering a corner hot. The sled would give a slight headshake before settling into a line and power could be applied from just past the apex. The good news is the G4 is already a very well mannered trail sled and things should only get better as refinements and calibrations improve.

There’s a lot of new technology packed into the new Ski-Doo models that all went in to making the sled more nimble, more responsive and of course…quicker. Much of it you may never see, especially several engine components such as a new generation of E-TEC direction injection which now includes throttle body injectors. These injectors come into play when you punch the throttle, delivering the added fuel needed to spool up the 850 more quickly than before. Ski-Doo claims the engine remains very clean and fuel efficient despite the addition of these intake port injectors. Other newness under the hood include new electronically controlled, 3-position exhaust valves, a more compact exhaust system, a high-flow and quiet intake tract, plasma cylinder coating, engine control module, direct oil crank bearings, forged aluminum pistons with a cast iron holding ring, two-piece forged crankshaft and a sealed starter motor that eliminates the need for a ring gear.

The profile view of the new G4 design clearly shows the far forward rider design found in both the trail and off-trail models. The console is canted far forward and when combined with the open toeholds, allows you to get further forward in the corners. The MXZ and Renegade models in particular feature a console design giving riders a forward “stepped” progression. The panels feature three tiers to place your knee. Unlike more traditional console designs, the new Ergo-Step panels, as Ski-Doo is calling them, doesn’t require a rider to throw a knee out in the corner, but rather simply slide it forward and out slightly. Upon doing so you’ll soon find yourself hanging out practically over the spindle in the corners. The Summit touts a different console designed specifically for stand-up off-trail riding.

RIDE REVIEW: Ok enough blowing smoke on the new technology, let’s get down to what you and every other potential new buggy owner wants to know…does it work?

The new open toe-hold of the G4 feels more like a off-trail mountain feature than something designed to enhance the trail riding experience. Ski-Doo offers plenty of accessories for this including an adjustable toe-hold and side close-off, which in our opinion is a must have for trail pounders and should have been included as part of the factory build for MXZ models.

Cleary the new G4 is narrow…we found it far easier to move around the console than ever before. In riding the previous generation XS platform back-to-back with the G4 we found two immediate differences that played into our interaction with the vehicle.

First, once you find your rhythm on a twisted trail the G4 will soon have you using a fore and aft sliding motion versus side-to-side. We found ourselves having to pull our foot back and then sling our knee out on the XS when attempting to load the inside of the chassis and power through a corner. The G4 however had us simply sliding forward and slightly out to engage the same amount of lateral cornering forces. In other words you don’t need to hang out as far on the G4 to engage the same amount of cornering forces.

Viewed directly from behind you can easily see how much bodywork has been shed from the G4. Look particularly at the spindle area and you’ll soon see how the newest version is 4-inches narrower.

When it comes to the open toe-holds, the jury is still out. While this seems like a great idea for off-trail riding, we often found ourselves looking to push on the outside running board when performing high speed turns. The open toe-hold had us searching for a place to push and on more than one occasion our boot flew out of the opening as we looked to load the outer ski with an outside boot push. Ski-Doo tells us it’s a different riding experience you’ll learn to adapt to, but we’ll pony up the $100 bucks to install the optional outside toe plates, something we feel MXZ models need to come with standard from the factory.

As for the big 850…is it a rocket? Yes and no. For certain the 850 accelerates harder and quicker than the 800 twin it replaces. Riding the new G4 in MXZ or Renegade trim had us thinking this sled is just more fun than the previous platform. The vehicle transfers weight with more ease, allowing you to pick the skis and loft over trail bumps and holes. In fact the vehicle has a lighter and more playful feel than the XS chassis, yet that easy to transfer feeling came with slightly less confidence in tight high-speed trails where the more refined XS chassis MXZ exhibited the “on-rails” feeling that has made the MXZ the best and quickest twisted trail sled in years past. Of course this could change as Ski-Doo engineers make continued refinements to calibrations before production sleds his the snow pack next winter.

The view from above shows off the narrow tank area and the forward leaning cowl.

Out on the wide open snow pack the Ski-Doo feels blistering fast, but in impromptu head to head runs with both the Polaris and Arctic Cat 800 big bore twins, it was anybody’s race to win, where rider weight and clean hard pack snow spelled the difference. Even though the G4 has a 50cc advantage, it takes a lot to move the needle once you eclipse the 100mph mark, and many things come into play at these speeds including suspension settings, track type, chassis efficiency and clutching. We suspect the speed of the new REV will gain over time as once again improved calibrations are made prior to production.

No question the new G4 platform is an engineering marvel. Considerable thought, time, energy and investment went into what is clearly the most advanced Ski-Doo chassis ever. Everything is packaged tightly and neatly, and in classic Ski-Doo fashion the entire sled feels very complete and solid, with no strange rattles, rough edges or hiccups to the overall riding experience.

Keep in mind; our experience thus far with the new Ski-Doo models has been on early build pre-production models in spring snow conditions. Given our experience over the past 25 years, a lot can change between now and first snow fall…both good and bad. However in this early state of tune, the G4 platform is good, damn good, and given Ski-Doo’s track record when it comes to chassis, powertrain and suspension refinement…things will only get better.

Editors Note: For more photos, captions and details on the new 2017 Ski-Doo G4 platform, check out our Spring issue of On Snow Magazine hitting newstands and mailboxes at the end of March.