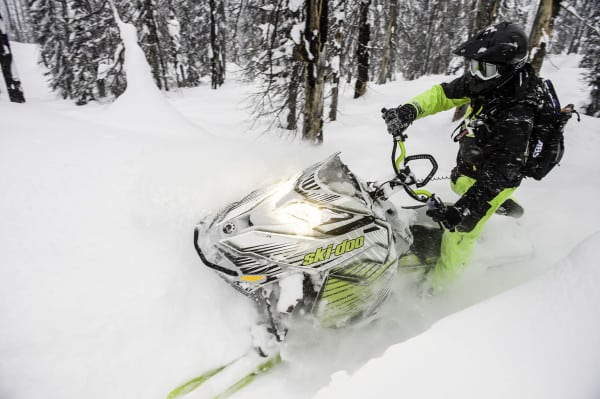 Being a leader can at times be a dicey situation…a balancing act between protecting what got you there, and keeping your foot on the gas with continued innovations to keep you there. Such is the position that Ski-Doo continues to find itself in as the 2014 models are introduced. After significantly improving their offerings last season with new technology led by the t-Motion suspension, fresh plastic, and the expansion of r-Motion; the 2014 encore presentation is a mixture of expansion of last year’s goodness and the introduction or more new technology.

However this time the new tech is directed outside the heart of market, as BRP pins its hopes on future growth by expanding in areas of extreme clean and fuel efficient engines with the introduction of a bigger ACE powerplant and accompanying intelligent throttle control technology.  Joining the outside the box technology is continued expansion of the good stuff such as t-Motion in Summit Sp and Freeride models, an upgraded gauge package on most premium models, more race track toughness moved to the trail…and wraps, lots of wraps. After taking a few days to digest it all, here is our first take on Doo’s 2014 lineup.