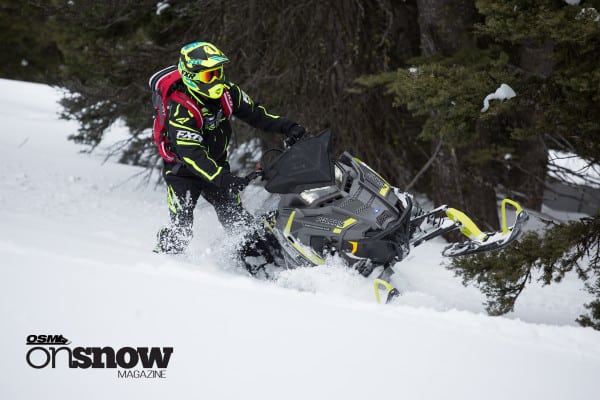 Editors Note: This is an excerpt from the October 2017 Issue (7.2/31.2) of On Snow Magazine. To read the full review subscribe today.

Many deep snow fanatics already consider the Polaris RMK in the AXYS chassis to be the most formidable mountain sled on snow. Because of this few, including us, expected much in terms of newness for the 2017 model year…we were wrong. Instead Polaris dropped another bomb on the deep snow segment with their spring order only PRO-RMK 174 Limited Edition. Featuring a new Series 7 track with 3-inch lugs specifically designed for deep powder snow, the new RMK is longer than any other RMK to date. Tipping the scales at just a claimed 442-pounds, the RMK engineering crew did some subtle tweaks in the relationship between the rear suspension and the chassis to retain the ideal balance this chassis has been known to exude. The big 174 also opts for a traditional chaincase instead of the open concept QuickDrive cogged belt system found on other RMK models.

OSM Pro Rider Tyler Swarm – I’m not sure where to begin with the compliments for this machine! In 2011, I was convinced Polaris had built a snowmobile that could not be drastically improved upon. With the release of the AXYS mountain chassis, I was quickly proven wrong. Surprisingly the AXYS with a 174″ track is more maneuverable than a previous model year Pro RMK with a 163″ track. Just when you think you’re going to be stuck in that awkward creek bottom, pin it and let her buck! This lightweight long tracked mountain beast will claw her way out of situations you would normally be buried up to your plums. On the deep days, you’ll be the one breaking trail and riding circles around your buddies! Polaris just keeps knocking it out of the park.

OSM Pro Rider Jake Travers – If you’re looking to compensate for what you might be lacking elsewhere, you may want to consider the Polaris 174. This sled is impressive when in action, but may seem a bit of a hassle when not. No question, the long PRO-RMK will take you darn near anywhere you point it…and I mean anywhere. I found myself in situations where I would normally get stuck, but with the RMK I would simple throttle down and the sled would find a way to “tractor” its way out it. Boon-docking the trees also impressed me. Despite the length, the sled maneuvered though the tight stuff way better than my initial expectations led me to believe. There were moments where it seemed to be a bit more difficult to hold a sidehill line than say a shorter sled. But that shortcoming vanishes when you realize you can turn it up the hill at a moments notice and charge up chutes most sleds would dare not tread. Just don’t get caught behind it…she throws one helluva roost.

OSM Pro Rider Jordan Hammack – Tired of getting stuck? Do people laugh when you pull into the parking lot with your Subaru towing  your 1997 RMK 136? Does your wife seem to be spending a little less time at home and a little more time “out with the girls?” Does a long day of riding make you feel weak and less like of a man? Well, once again Polaris has the answer with the new for 2017 AXYS based PRO-RMK 800 174. This extension to your manhood will have you strutting around the locker room with a towel over your shoulder. The reduced drag of the AXYS chassis teamed up with the additional flotation and traction of the ultra-long 174-inch track makes it virtually impossible to get stuck. Even our (ahem) wiser and much older boss men at OSM were reaching those powder stashes like young bucks experiencing their first rut. Though this machine is fairly easy to maneuver, you’re still dealing with a 174-inch track making it a little less flickable.