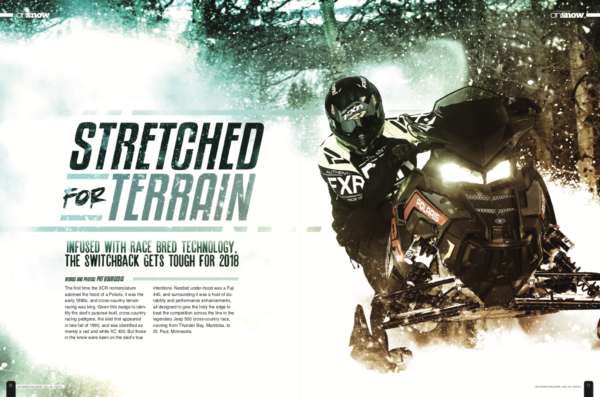 The first time the XCR nomenclature adorned the hood of a Polaris it was the early 1990s, and cross-country terrain racing was king. Given this badge to identify the sled’s purpose-built, cross-country racing pedigree, the sled first appeared in late fall of 1990, and was identified as merely a red and white XC 400. But those in the know were keen on the sled’s true intentions. Nestled under-hood was a Fuji 440, and surrounding it was a host of durability and performance enhancements all designed to give the Indy the edge to beat the competition across the line in the legendary Jeep 500 cross-country race running from Thunder Bay, Manitoba to St. Paul, Minnesota.

It didn’t take long for Polaris faithful and race fans in general to refer to the “hopped-up” sled as the XC Racer. Thus, the following year, the XCR was born. Year-over-year, the XCR would debut during the Polaris race school, a late fall tradition for all manufacturers during the heyday of terrain racing. Each time the XCR would usher in the latest technology and durability enhancements. Those that were deemed successful would often make their way onto consumer sleds in subsequent years. 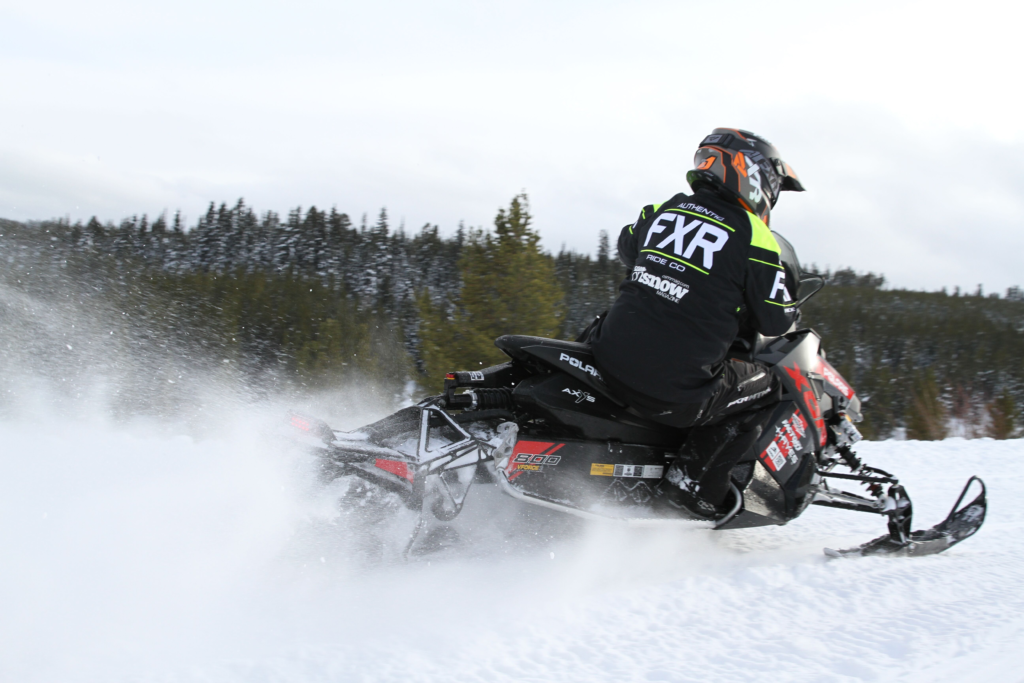 While the Indy was already a homerun snowmobile, the XCR was even better. The Indy was known for its ability to “run wounded”, a term terrain racers would use to describe a sled’s ability to keep clicking off miles at near wide-open throttle, even after taking on damage. The Indy, and to an even greater degree the Indy XCR, was unquestionably the best at this trait, and one of the biggest reason the XCR dominated terrain racing during the 1980s and into the early 90s.

When we first learned Polaris was bringing back the XCR badge a winter ago to adorn a “beefed-up” AXYS based Rush, we were skeptical at first. Our fond memories of the XCR and its history of being tough as nails were at risk of being watered down if the “new” XCR didn’t live up to expectations. We were happy to discover it did. After a year on the snow with the Rush XCR, fond memories of the XCR returned as we dished out a season of punishment on less than ideal snow conditions with big rewards and zero failures.

So, it came with little surprise when the success of the XCR was injected into the more popular and stretched Switchback platform for 2018. After all, if what’s good for the goose, should most definitely be good for the gander. 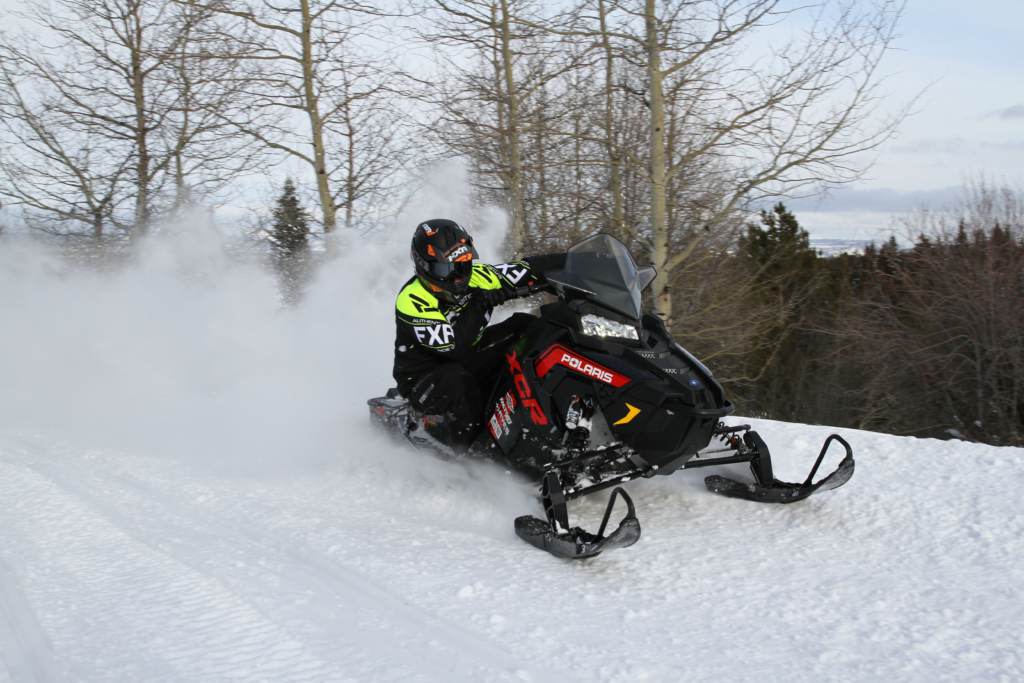 The goodness comes in the form of list of Polaris Race Technology components that transform the already good Switchback into a terrain taming weapon that not only lives through abuse, but frankly loves it.

The toughness starts at the back where a Pro-XC suspension gets a full race-ready treatment with a chromoly rear pivot, a heavy-duty front track shock mount, a chromoly front torque arm, reinforced rail beams, solid mid-rail wheels, and direct from the IQR snocross racer rear axle wheels. Nearly all of these components are more about taking punishment versus improving performance, which is just fine as we feel the Pro-XC rear is currently the industry standard for ride performance.

The toughness continues with a solid hardened jackshaft which meets up with a brake rotor that was developed for the race track. Featuring a larger surface area for improved performance and increased cooling, the oversized rotor is further assisted with an integrated, hood-mounted air scoop. Mated to the system are performance brake pads Polaris refers to as Type 81. The pads are designed for high heat, and even under heavy trail braking on a tight trail we only initiated subtle fade after several miles of overly aggressive use.

Lastly, the final component of the XCR transformation are the premium Walker Evans shocks found on all four locations. The ski shocks as well as the rear track shock feature both high and low speed compression adjustability. The adjustments are bit awkward compared to the easy to tune FOX Quick Switch units found on many other sleds, but if your butt can detect subtle nuances in valving, these shocks offer the same subtle variances in tuning to match.

The all-important front track shock is also a Walker Evans unit, but lacks any type of user tuning. Instead Polaris opted for an oversized 2-inch body to allow for more oil volume resulting in improved damping control and quicker recovery. 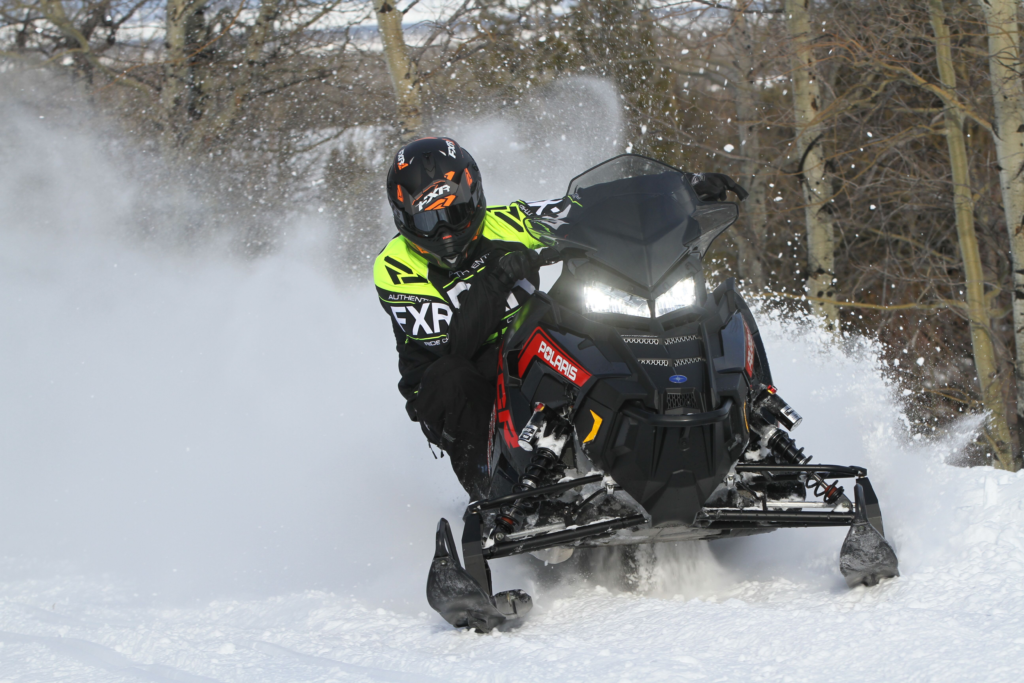 When it comes to any snowmobile claiming to have a race-bred pedigree, our backside cringes from past experiences of sleds with too-stiff calibrations and race only ergonomics. Often times these sleds look sexy on showroom floors, give you bragging rights at the local water hole, and feed your go big bump ego. But when it comes to real world recreational riding, deliver less than ideal results for all but a few of the most adept and true race-pace riders.

The XCR Switchback is one of those rare sleds that serves up race ready components, looks race day ready, will bloat your ego to massive proportions, and is geared for abuse. More importantly, it backs up that toughness with a ride quality that will satisfy the majority and can still be tuned to meet demands of the elite few, you know who you are.

In out of the box tune, the sled is firm but compliant, delivering balanced feedback through the bars, seat, and chassis that is in the Goldilocks zone. Not too soft, yet not teeth jarring firm. If pushing the limits is where you want to ride, the Walkers are up to the task, and can deliver near-true race-ready ride calibrations.

But beyond the ride calibrations, we were even more smitten with the entire demeanor of the Switchback XCR. The AXYS chassis is truly at home with the slightly longer 137-inch wheelbase of the Switchback. The sled feels planted, tracks lazer straight through trail chop, and the back-end pivots on cue in sweeper turns, rarely wanting to over-rotate unlike the short-track Rush.

Early on, we found the Pro-Ride, and to a lesser extent the AXYS chassis, to lack the true precision we craved for high-speed trail carving. But year after year, Polaris engineers have continued to refine the Polaris performance trail breed, making this nag harder and harder to detect. While we wouldn’t call the Switchback to have exacting precision, we’d be hard pressed to find another “out of the box” sled that can match it with the same easy to drive and assured nature.

Of course, no sled is perfect and the XCR Switchback still carries with it a few nags. Tops on the list is lack of rebound control for the rear shock. Polaris engineers tell us adding rebound control is something they feel could potentially do more harm than good to the Pro XC suspension. Many riders don’t have a complete grasp on how to tune rebound control and adding the adjustment could only sour overall ride compliance. Frankly we agree with them, yet we’d still like to see this option on the XCR package. The Pro XC suspension has become a winner, but we still find occasions where rebound feels too slow, causing the suspension to “pack-up” when hammering repetitive big moguls at high speed. Other smaller nags including a starter and ring gear that sounds like a box of marbles after the first week, and a too small Polaris Interactive Digital Display. We can overlook the screen size though, given just how good the entire Ride Command application and supporting components are. The ability to have an integrated and searchable digital mapping system on-board and on your smart phone is so huge, we can’t imagine riding without it.

Oh, and what about the engine? While there has been plenty of buzz surrounding the new 850 Rotax motor from the XCR’s competition across the border, we feel the latest generation 800 Polaris mill is every bit as potent. Tickle the injectors with a nudge of the throttle and the eagerness of the twin-cylinder two-stroke to increase revolutions is nearly unbridled. The motor is a ripper, revving freely with a ferocity that is nothing short of addictive. Add this quick to spool nature to a chassis and suspension calibrations that is light, playful, predictable, and precise and the you have all the ingredients to make the XCR a winner once again. 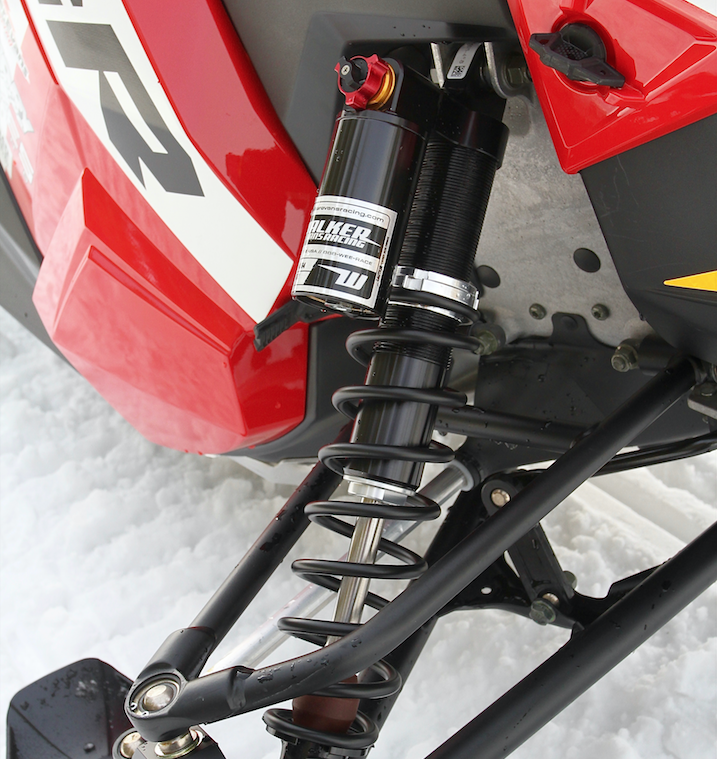 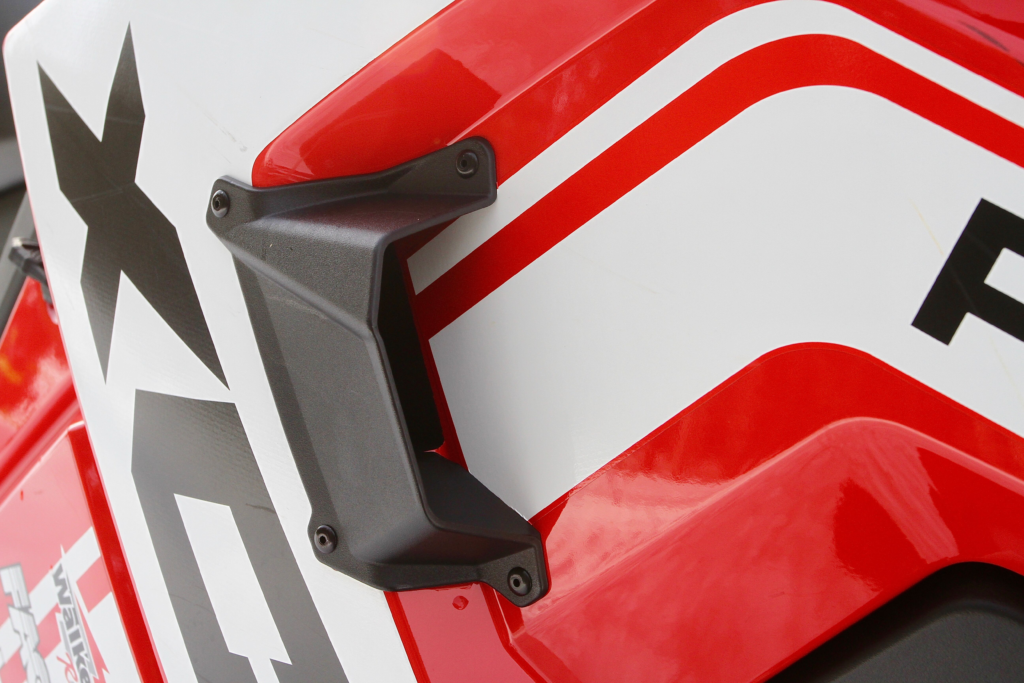 Aside from the large XCR nomenclature adorning the hood, the externally mounted hood-scoop for brake cooling is a sure-fire giveaway to identify the XCR package. 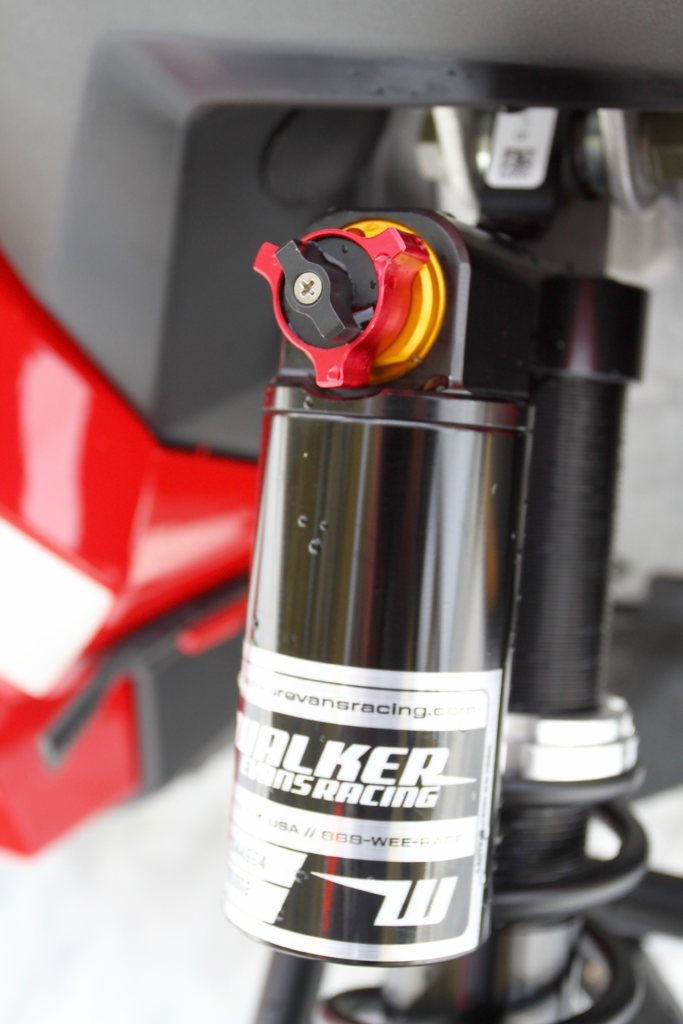 Both the high-speed and low-speed adjustments on the Walker Evans race shocks offer up a broad range of adjustment. Too much so perhaps for average tuners, but ideal for those with a “well-tuned” bottom side. 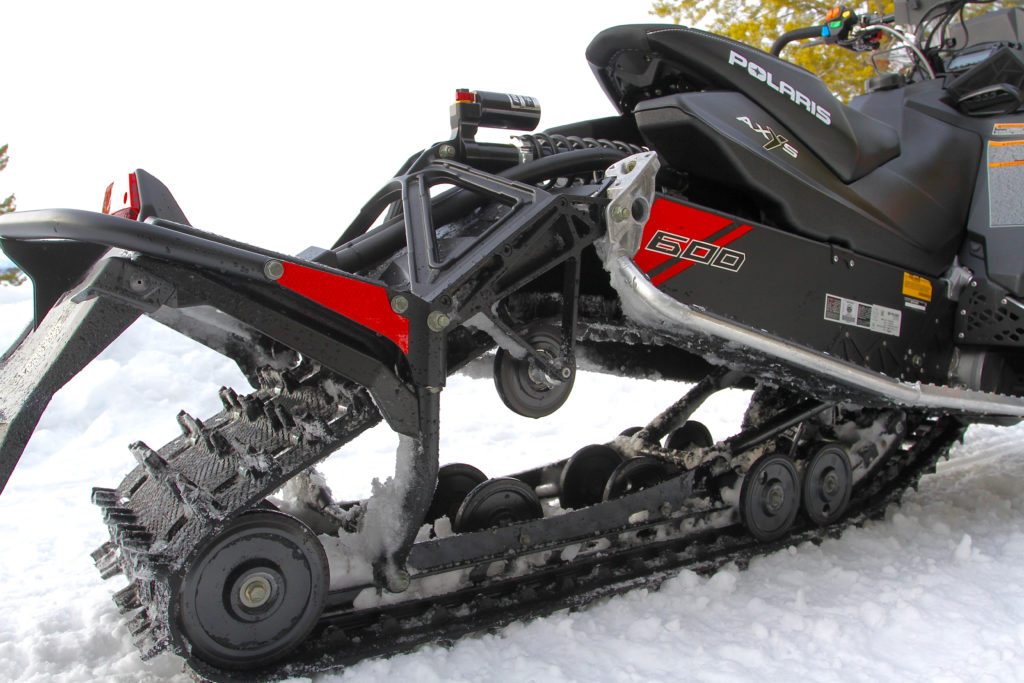 Nine years removed from the first iteration of the “outside-the-tunnel” design the Pro-Ride introduced, Polaris has finally nailed the design and calibrations. The Switchback XCR has one of the best out-of-the-box calibrations on snow for 2018 for performance riding. 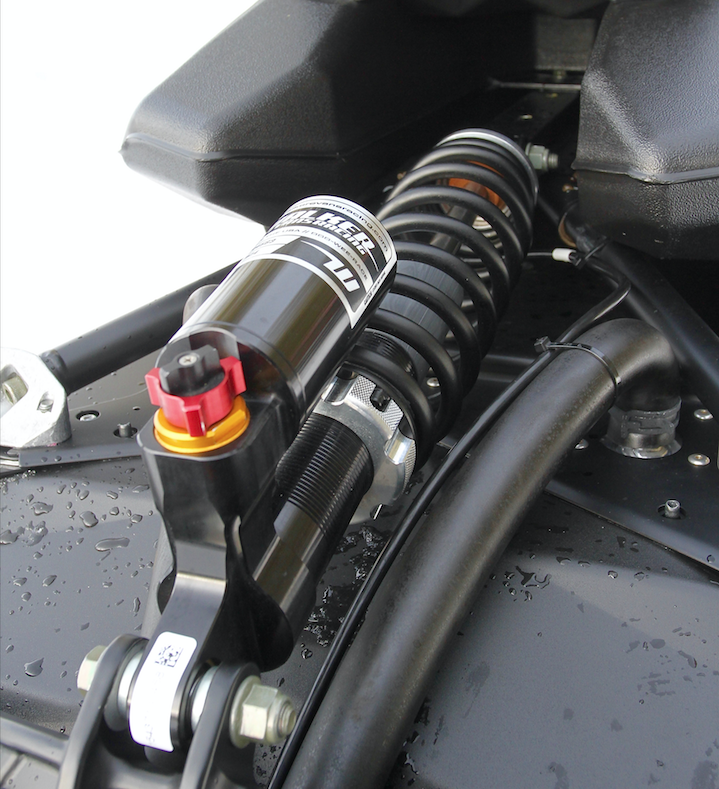 The horizontal mounted rear shock on the Pro XC has lost some of the finicky nature it was known for early on, yet pre-load adjustments are still very important and a pain to make. 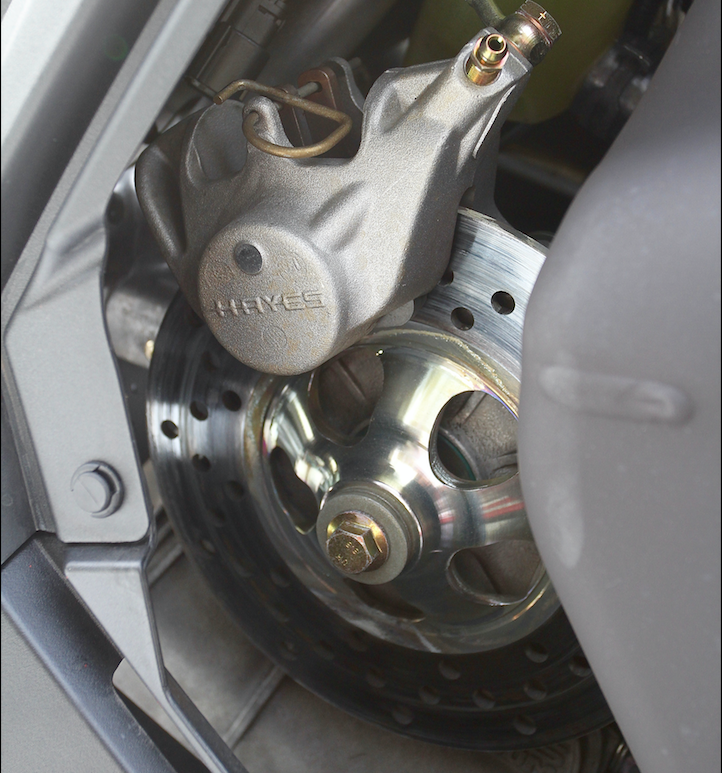 Seems few talk about braking performance as of late, but truth be told the industry has taken a step backwards from where it was 15-years ago. Given the race nature of the XCR, the Switchback takes a step in the right direction with an oversized, jack-shaft mounted rotor and high-temp pads. 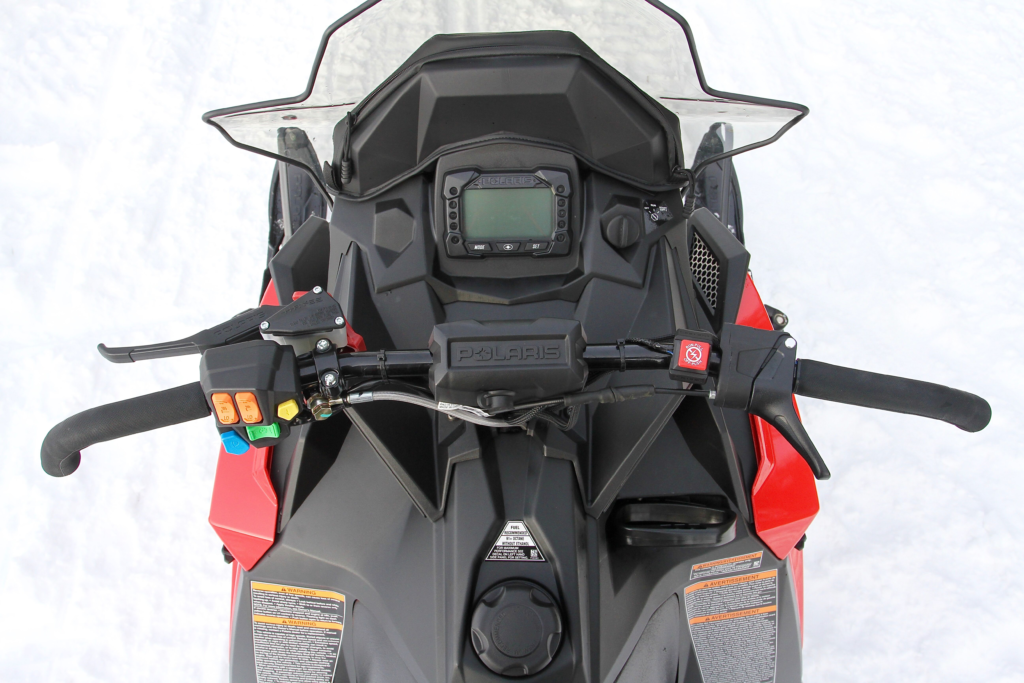 Office space is minimalistic yet functional. Improved fit and finish in this area would give Polaris a boost in showroom appeal. 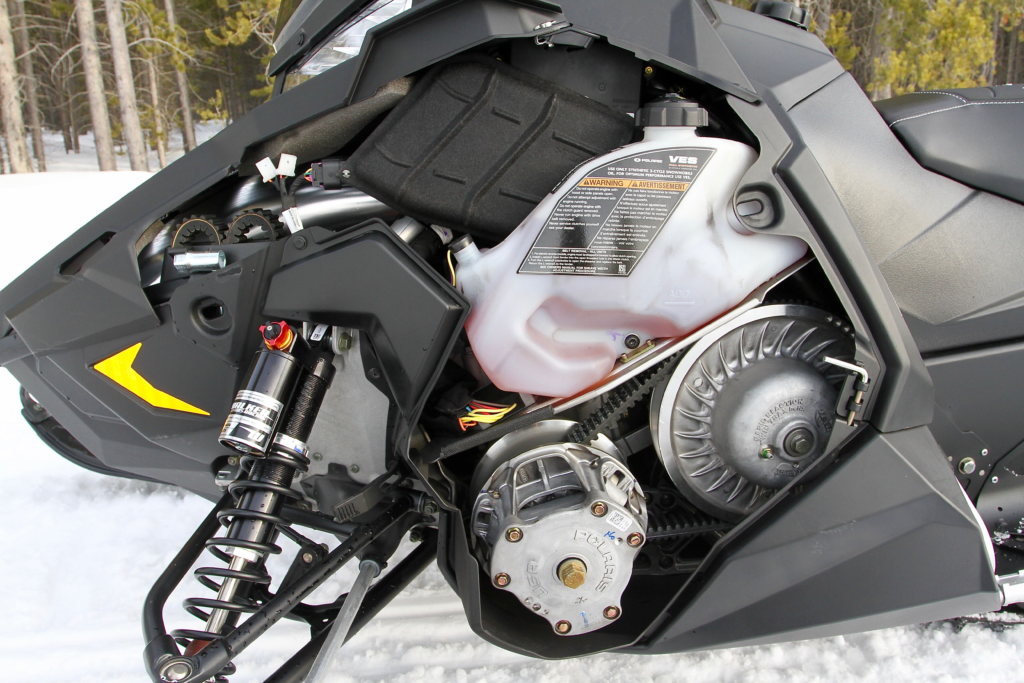 With more power, bigger tracks, tighter under-hood confines, and greater demands by riders, belt performance remains a hot-button issue. Still common sense prevails and if employed we’ve been more than satisfied with both performance and belt-life with our latest Polaris buggies. 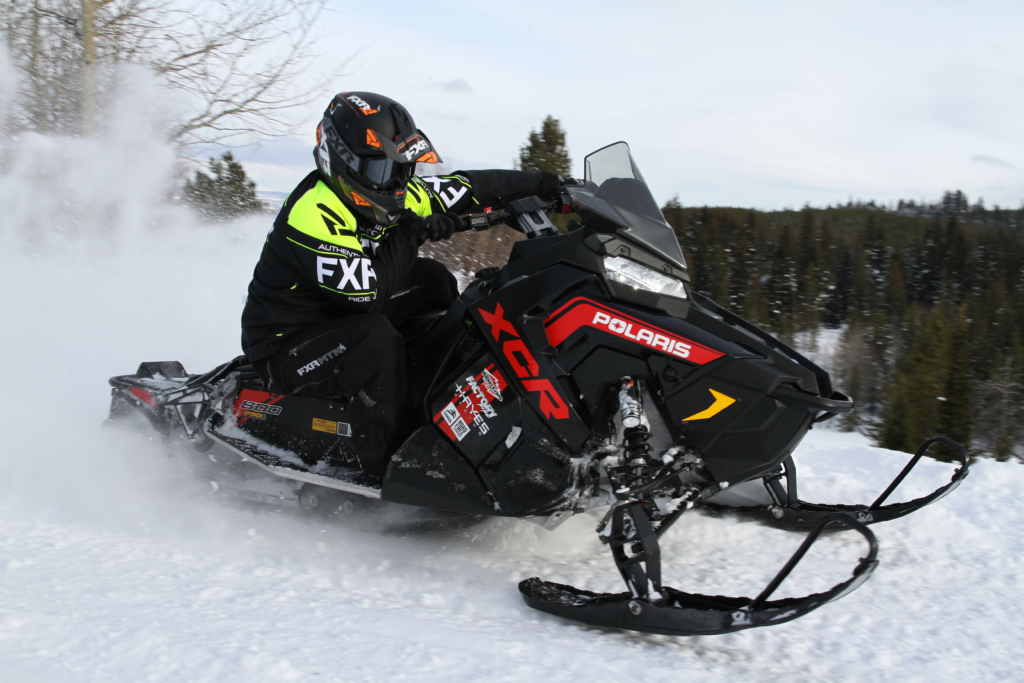 For the past two winters, the Pro S Switchback has been the sled no one wants to leave behind thanks to its combination of comfort, performance, and versatility. We expect more of the same with the XCR in 2018.