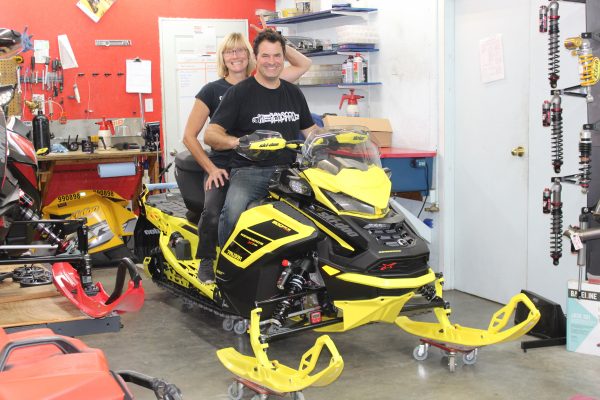 we will be going over your snowmobile’s suspensionsystem, and our goal is to educate you on what you have. We will be discussing some of the finer details of your suspension, and then delve into tuning.  If we can roll back the mystery surrounding your suspension, even just a little bit, not only will your enjoyment of your snowmobile improve dramatically, but you will have some ideas on tuning direction as temperature, conditions, or your riding pace changes.  Now let’s face it, if you are trail-side this winter and ask someone about their suspension settings, nine out of ten riders will shrug their shoulders, look lost and admit that they never touch it! They will say things like, “I just ride it, I think its pretty good”, or “My dealer set it up, so I know it’s the best it can be”, and even, “I don’t know what I am doing, so I don’t want to mess it up or make it worse.”  Hopefully, we can remove some of that fear and apprehension you have from the voodoo art that keeps you composed as you ride down your favorite trail and give you the confidence to start playing and learning just how good that machine under you can be! 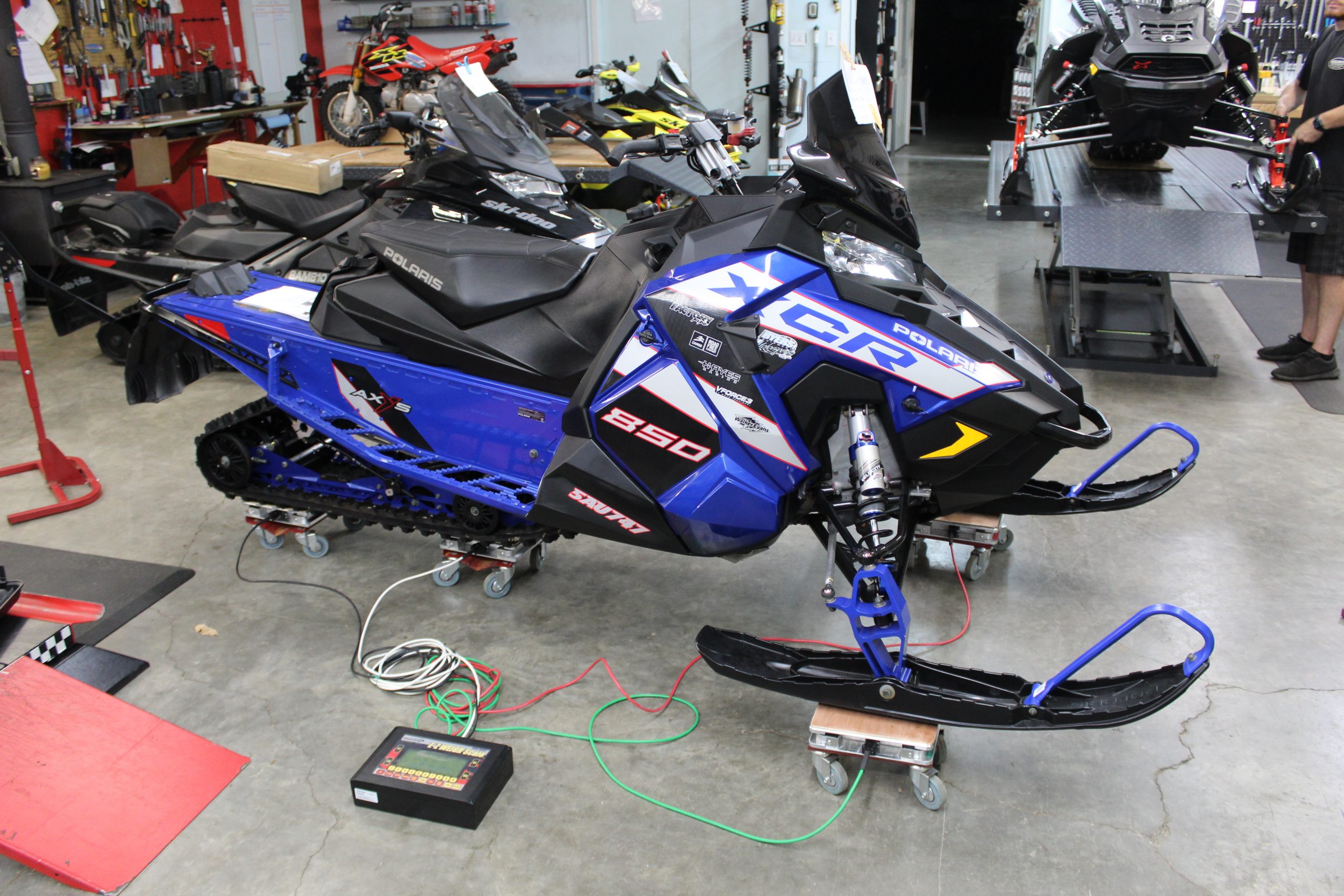 Let’s pull back the covers a bit and see what we have. A movable arm and a simple shock absorber usually comprise a very basic suspension system. The common shock absorber combines a spring, selected to hold up a certain amount of weight, and a damper inside it to control and reduce motion.  That’s it; a spring and a damper! Most current snowmobiles have four shocks to get the job done – two up front for the skis, a center track shock (CTS) and a rear track shock (RTS). The recently retired, Japanese built Yamaha Apex and Vector models, along with their predecessors, for years utilized what was called their Mono-shock skid frame to look after the rear suspension duties with just one shock.  For reasons of packaging, engineering execution and simplicity, the rear track shock on most current snowmobile models is not the ‘coil-over’ design that’s common to the ski and center shocks where the spring is wrapped around the damper, but the naked rear shock and torsion spring design that separates the functions of load support and motion. 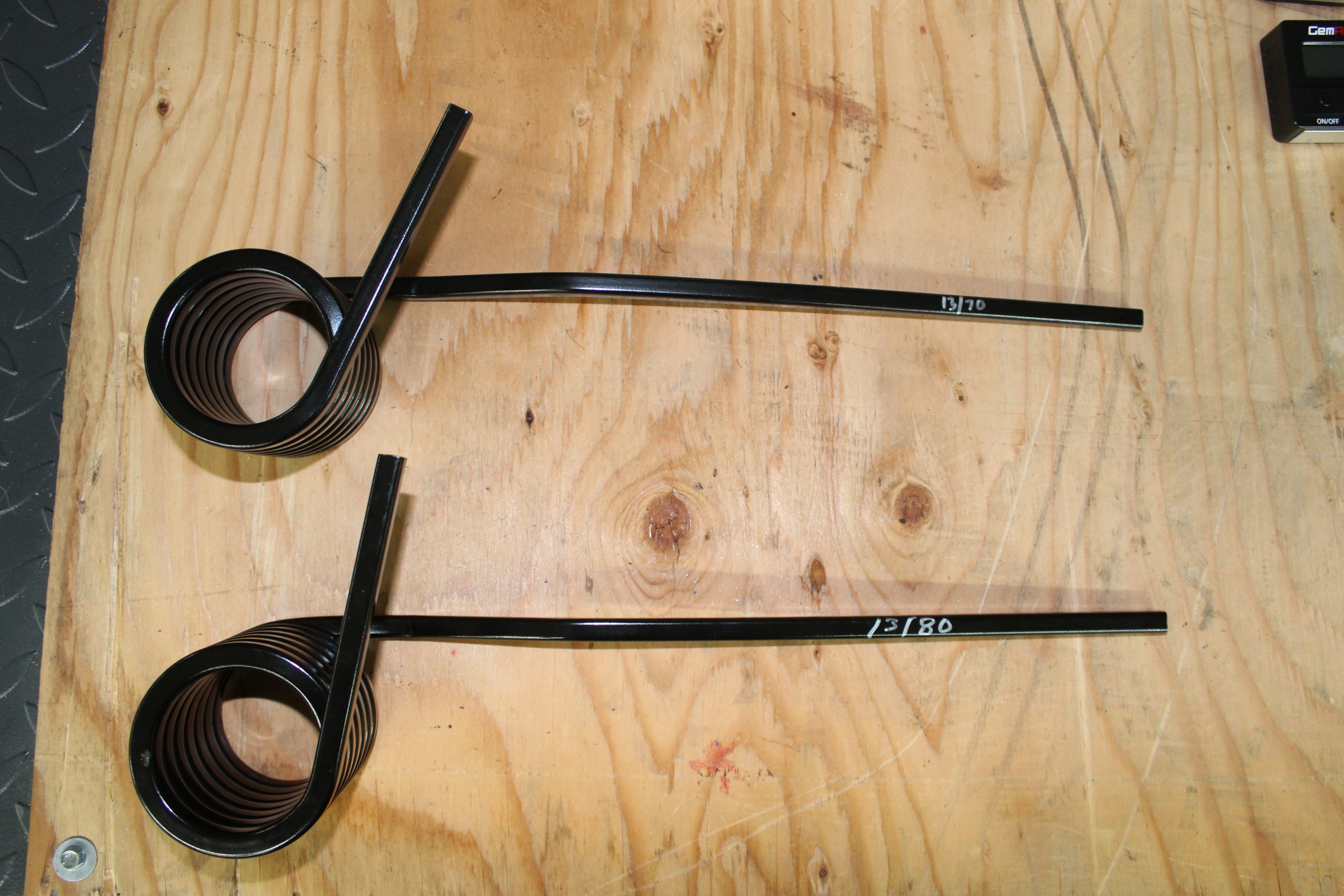 Now, to divide things up a bit, the four shocks will each have springs designed to hold up roughly 1/4 of the weight of the snowmobile (keeping it simple).  However, if we just used springs and no dampers, the machine would bounce uncontrollably after every bump like an old car with blown out shocks.  Friction in the bushings, collars, axles and bearings would eventually stop the motion, until you hit another bump or even think of touching the throttle or brakes, and then the oscillations would continue endlessly until you finally stopped your sled to vomit from the seasickness.  Thankfully, dampers were then invented, which calmed this unwanted ‘post bump’ motion, and also greatly enhanced rider enjoyment and safety. Dividing up the directions of damping resistance is simply up and down. However, up and down doesn’t sound very cool, so us suspension types prefer to call these directions Compression (ski or skid up) and Rebound (ski or skid back down).  Very early dampers used simple mechanical friction to ‘wear out’ the motion and bring oscillations to a stop, but they needed constant adjustment and generated excessive heat when bump frequency was high on rough roads. This brought on the advent of oil filled dampers, which were tidy, didn’t rust, didn’t freeze and could be adjusted for different loads or applications.  The modern oil filled damper offers significant resistance to motion in both compression and rebound directions, and can do so for thousands of trouble-free cycles without any love or service.  The most basic damper will have an upper oil cylinder with an eye mount on one end, which we bolt to a fixed location on our chassis, and a rod mount on the other end, that we bolt to our ski or skid frame.  The damper rod is attached to a piston, sealed up inside the oil filled cylinder. This piston is forced up and down inside the cylinder as we ride, causing oil to flow back and forth through the piston.  Resistance to motion is tuned by small holes in the piston and flexible shims to cover those holes, separately selected for the compression and rebound sides of the piston.  Again, keeping it VERY simple, adjustable shocks have adjusters (or clickers) that can increase or decrease the percentage of oil forced through that piston or allowed to bypass around it.  By adjusting the clicker(s), we can increase or decrease the resistance to motion in one or both directions, depending on the specifications of that particular damper. 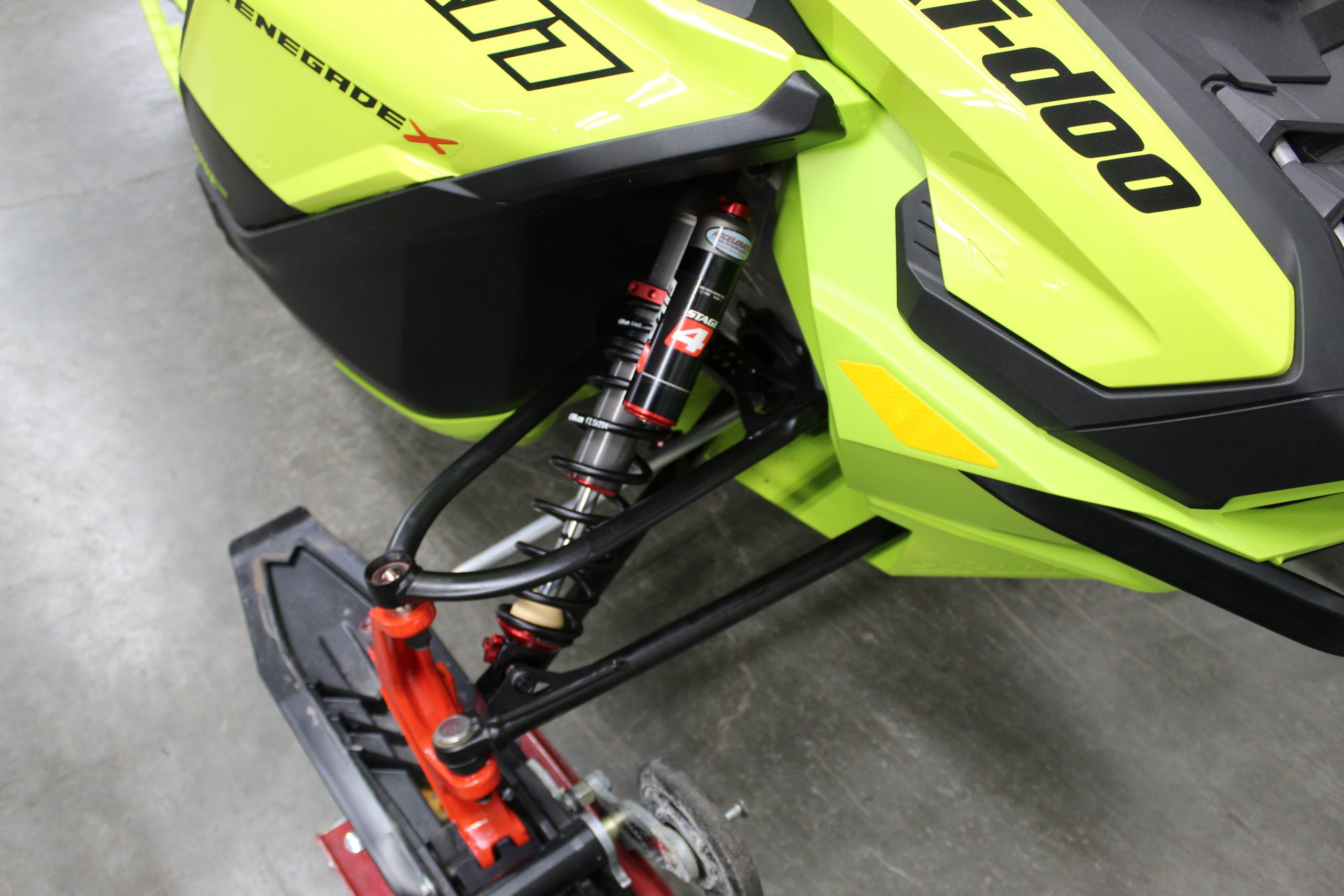 Why do we need to service these shocks?

Similar to your engine, there is a relatively small amount of oil looking after an important task.  Primarily, the suspension fluid permits relatively low friction motion between parts, as oil is a natural lubricant.  However, these economically machined parts do break in (just like your engine), with pistons wearing off high spots inside their cylinders, and slowly rubbing themselves the clearance that they want and need.  This rubbing generates small metal contamination particulate as the parts scrape by each other.  In a 4-stroke engine, this contamination is carried away by the engine oil and removed during the first, post break-in oil change, if not captured in the oil filter.  In a 2-stroke engine, the higher oil volume setting designed into your ECU for engine break-in during those important first few tanks of gas, washes the break-in particulate out the exhaust port.  Your shocks however, aren’t that lucky.  The break-in metal filings in your shocks just sinks down and collect around the seal and bushing in the bottom of the shock, making motion sticky and leading to poor bump compliance.  More contamination will start to jam the valve shims open, reducing damping, and finally metal bits will settle into the bushings where they start to scratch the hardened shaft which leads to scoring.  When the seals have had enough and can’t function any longer, the shocks will catastrophically fail and leave a puddle of oil under your sled. This lack of preventative maintenance perplexes me.  Do you wait until your engine oil is so bad that it fails, and a piston sticks, or a connecting rod saws its way through your engine cases before you give it an oil change???  Or do you do the right thing and change your oil after break in? 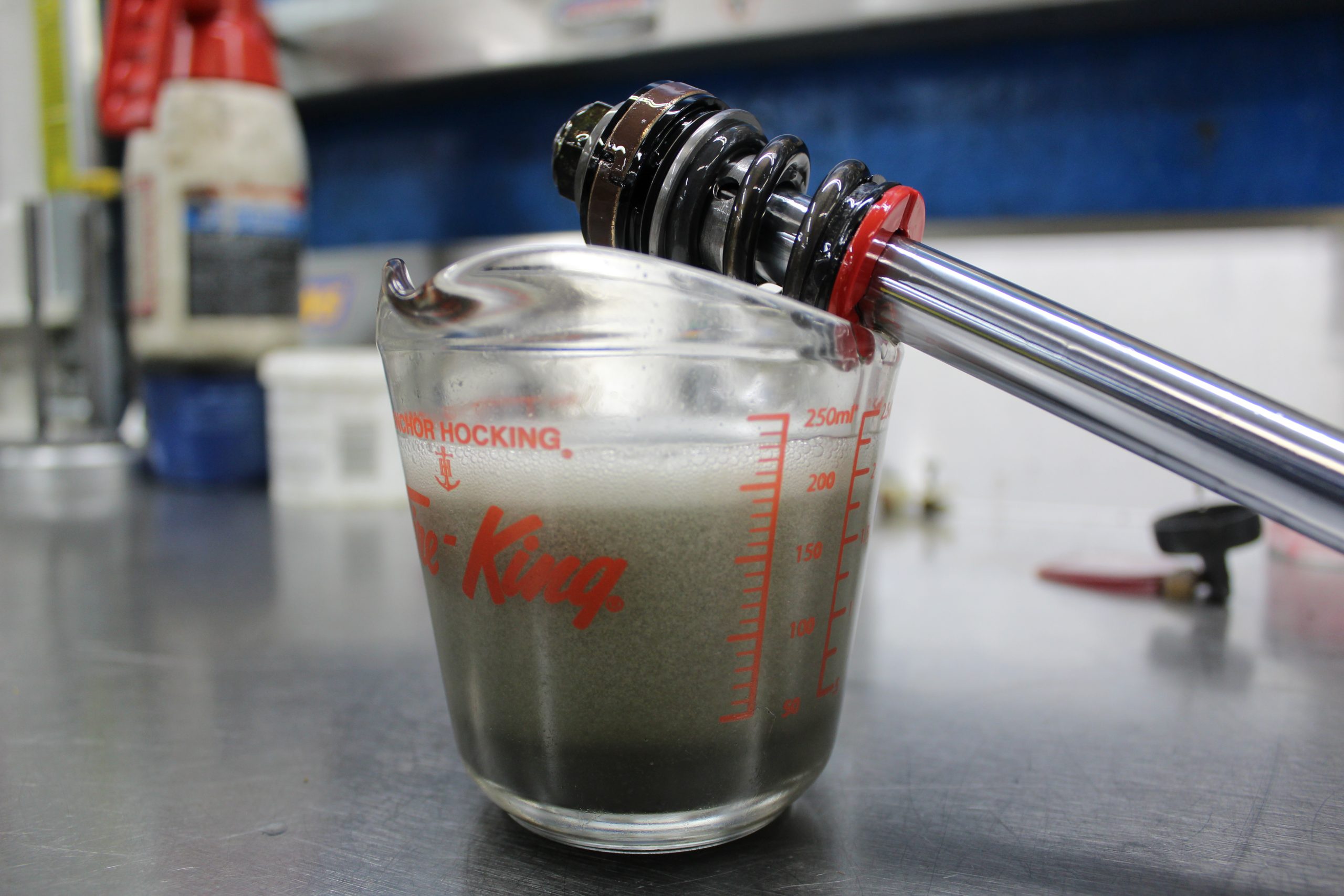 Shock oil deteriorates slowly, say 2-3% every ride, so the loss of control and bump compliance is hardly noticeable day to day, but when the shocks are serviced, the return to ‘better than new’ performance is startling.  The other issue with damper degradation that we notice every year is the loss of nitrogen charge pressure.  A high-pressure gas shock uses nitrogen pressure to squeeze the oil as the shock cycles, keeping the oil and piston under compression.  Without this ‘squeeze’, the oil would shear or cavitate at high velocities as the piston whips back and forth through the fluid.  Cavitation is a strange phenomenon that can most easily be seen as the mystery air bubbles that come up to the surface from around your boat propeller when you notch it into gear.  Where did the air come from?  The water is basically broken down at the molecular level by the spinning propeller and air, and the by-product is released.  Anyway, as the shock slowly looses nitrogen pressure over time, the cavitation threshold is eclipsed and the shock starts to create foam, which has zero damping resistance.  This is another possibility for damper fail.

So, hopefully we have given you some appreciation for those expensive little shocks that keep you between the snow banks and help keep you from constantly bottoming, and that yes, they would really love to be serviced after break-in, and then again after every 4,000 km -5,000 km.  Now, faced with rapidly failing dampers, you may get them serviced and return them to ‘like new’ status, or redirect that maintenance budget and consider a dramatic increase in performance, and replace the shocks altogether. Depending on your sleds shocks, new aftermarket replacement shocks can be purchased that offer higher build quality, more robust parts, dual rate springs, adjustable preload, compression and rebound damping, and an almost infinite number of spring rate options.