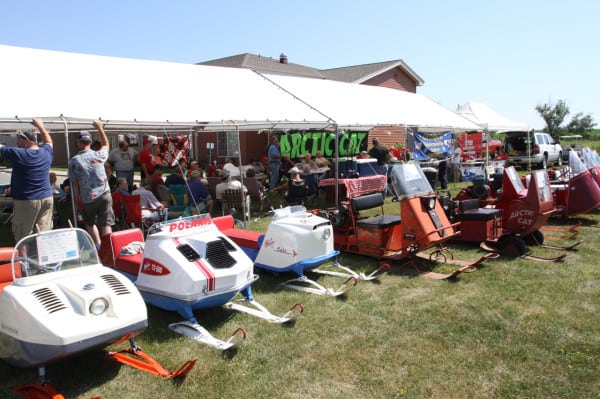 The Antique Snowmobile Club of America (ASCOA) held its annual summer meeting this past July in Hutchinson, Minnesota, and once again one of the key activities beyond taking care of business, displaying old sleds, and talking shop, was the restoration of a future raffle sled. This time the chosen sled was a 1969 Allied Rustler, a quirky and very unique looking sled to say the least. Utilized as a source of funding, each year the club selects a sled to restore at the previous summer meeting. The sled is disassembled and then carted away by various members, each of whom are tasked with restoring, repairing, and/or cleaning up the components in their possession. When they reconvene a year a later, the rewarding task of putting it all back together ensues. With many hands and just as many opinions, the sled is completed over an afternoon of hard work and comradery. The crew at OSM stopped by this summer to snap a few pics of the gathering and the progression of the Rustler. If old sleds are your thing then you owe it to yourself to join ASCOA. Annual dues are just $20 and as part of your membership you’ll receive 6 issues of their Iron Dog Tracks publication. To learn more and join, visit them online at www.ascoa.org. Special thanks to Valdi Stefanson for additional photos and information.

There were plenty of good looking vintage buggies on display at the ASCOA meeting including this sharp early Scorpion.

The Gottschalk Family, who only recently became actively involved in snowmobile collecting brought out a few gems to the meeting including an exact replica of the original Eliason Motor Toboggan.

The crew got to work immediately following the morning meeting and the rear suspension and installation of the track was first on the list.

Undoubtedly the most distinctive element of the 1969 Rustler is its oversized, wrap-around windshield.

Soon the sled was upright and the Rockwell engine was lowered into place.

Mission accomplished, an afternoon of sweat and wherewithal completed the Rustler which will be the next raffle sled used to generate funds for the club.