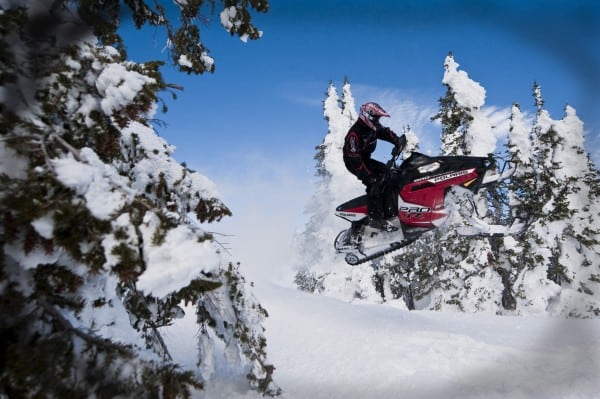 This week we will be giving you some key excerpts from our September feature article “Testosterone 150” which reviewed the big bore trail sleds. Up first is the Polaris 800 Rush Pro-R and our editors take on the latest ground and pound high performance trail buggy from Polaris.

Bourgeois’ Views – I always feel like the Polaris Rush is better suited as a circus act versus a serious big pony performance sled. Don’t get me wrong, the Rush in Pro-R trim is extremely capable, delivers more performance than most riders can take advantage of, and has the best front suspension in the business for tackling unknown terrain. Yet, it is the buggy’s hit or miss attitude that always leaves me asking which Rush I’m going to ride today. Most certainly, no other sled on snow currently attracts a crowd better than a Polaris Rush. Pull into your local pub and grub and park the Rush booty-out, and within minutes a crowd will soon gather around the unusual “inside-out” rear suspension. Hey, no need to tell them that the Pro-Ride rear skid is generally on-par at best with other conventional rear suspensions, and only in massive craters and whoops does the Pro-Ride suspension start to truly elevate itself above its rivals. For 2013 new skis, new one-piece handlebars, and a wider seat looks to improve the cornering performance and ergonomics of the Rush, and in turn help to civilize its sometimes abrasive personality.

Erickson’s Views – The Rush is a one of the most capable sleds and it oozes testosterone from its colorful Pro R, exposed-metal masculinity. Aside from its appearance, it is excellent, if not stunning, when ridden in some terrain. But it comes with a side effect. In the majority of trail conditions, dialing in the Rush Pro Ride rear suspension to optimize its handling and damping duties falls somewhere between enthusiast tuner and engineering PhD. It’s difficult and frustrating riding the Rush, knowing its capabilities, when its sensitive setup and changing terrain create the slimmest of performance windows. I see the future of the Polaris lineup: an expansion of the traditional skid-equipped Indy models, with the Rush lineage (and more specifically, the Pro R) keeping its hero-sled status for those who want to conquer the nastiest of terrain with the greatest, most progressive, capable rear suspension. The others who should be attracted to the Rush Pro R are those who want an active ride. It’s the most interactive snowmobile yet, requiring drivers to adjust position (the new ergos help comfort and ease of movement) to make both suspension and steering optimum.

Urquhart’s Views – Remember the Redline? It had so much cool stuff on it – a trick cantilever rear suspension, a crazy tube frame construction, and some sort of helicopter engine in one of the early versions. It oozed coolness and everyone wanted one. The RUSH kinda reminds me of that. Yeah, it’s trick and cool, and yeah, it works damn good for some things, but it’s nearly impossible to set up for a wide range of riding conditions. You can probably count on one hand the number of people who know how to truly set-up a Rush to ride consistently, and even then I wonder if it could still cover all the bases. I’ve never ridden two different RUSH sleds that ride the same. Plus, the sled is full of sharp edges – the bars jab you in the chest when you turn, there’s an edge in the bodywork that beats your shin to a pulp, and you crash through the seat to the edge of something hard when you lean off in the turns. For me, at 5’8”, the sled feels like it was designed for someone much taller. Sadly, the RUSH leaves me battered, bruised, worn out, and feeling robbed of what could have been a kickass snowmobile ride. Give me an Indy please.