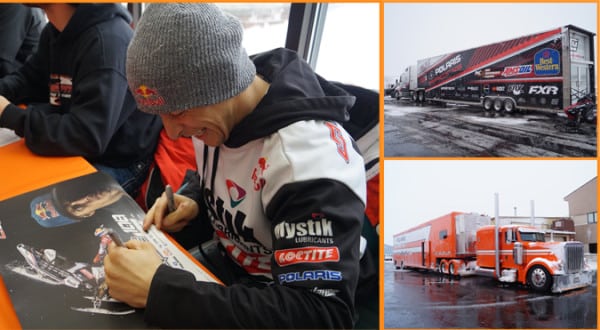 Planning on heading to The AMSOIL Champion Snocross at Soaring Eagle Feb 24-25 and your route takes you near Hope MI? If so, here is some news that you may want to hear about;  On the Thursday before the race you can stop at Woody’s Traction and meet face-to-face your favourite snocross racers.  Back for their yearly visit, Woody’s is hosting eight full race teams (with haulers) for a full-on meet-and-greet with the racers and chance to view their sleds. All visitors are also invited to tour the Woody’s manufacturing facility to see where traction magic happens, and even enter their name into a draw to win FREE tickets to attend the race at Soaring Eagle Casino. That there is what we call; a win/win/win.  To follow is the official press release from Woody’s and complete details to the event.

Hope, MI (January 18, 2017) Back for their yearly visit are eight national Snocross race teams to hang out at International Engineering & Manufacturing (IEM), maker of Woody’s® traction products, before the AMSOIL Championship Snocross (ACS) Series. Semi haulers and top of the line race sleds will be displayed for the public to see while racers sign autographs on Thursday, February 23, 2017 from 9:00am until 11:00am.

These national race teams are making a pit stop before they head out to Soaring Eagle Casino and Resort for the ACS Series on February 24 & 25. All race fans and local patrons are invited to visit and tour IEM’s facility while enjoying coffee, hot cocoa, and donuts and meeting some of the finest professional and amateur athletes in the sport. All guests are eligible to enter their name into a drawing for FREE tickets to attend the racing event at Soaring Eagle Casino and Resort.

Mark Mussellman, Vice President of Woody’s, states, “Every year this meet and greet gets bigger and better. We are excited to see new and returning racers and guests.”

These Snocross teams include:

Team LaVallee – Team LaVallee is a professional snowmobile team with over 30 years of racing background. Team members Levi LaVallee and Kyle Pallin have both been awarded fan favorite of the year, which makes it an honor having the opportunity to socialize with these guys on a personal level. Much success has been earned by the entire team, including Zak Mason, season after season.

Jess Racing – Jess Racing is a Snocross racing team based out of Westminster, MA. Last winter, the 18-year-old Montana Jess made 11 podiums in 16 starts throughout the ACS series.

Hentges Racing – Hengtes Racing has become the premiere factory Polaris Snocross team. Riders Kody Kamm and Petter Narsa have earned several accomplishments throughout their careers, and are already looking bright this season, as both drivers are in the top 5 points standings of the ACS Series.

Carlson Motorsports – Carlson Motorsports is a family of racers, mechanics and sponsors who are proud of their accomplishments on and off the track. The phrase “No off season” is what keeps them going all year round in order to stay sharp each season.  Rider(s): Andrew Carlson, Ryan Springer