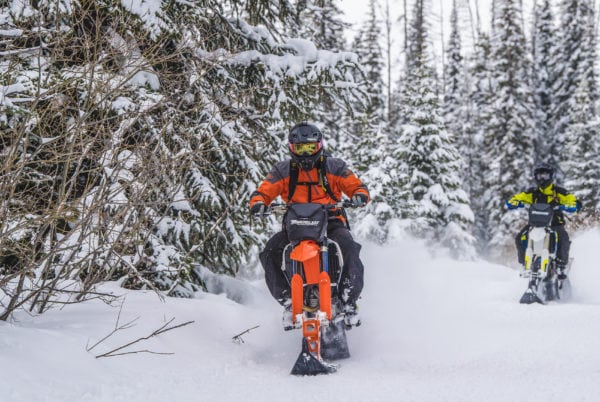 If you had any doubts as to where Timbersled brass feel the future of their dirt to snow conversions resides, this should help shed some light on the conversation. A new enduro bike cross-country series in the Midwest has just announced Timbersled will be their title sponsor this season. Chris Wolf, President of Polaris Snowmobiles and Timbersled, has told us on more than one occasion that current dirt bike owners represent their primary target for future Timbersled sales. Here’s the official release:

Timbersled, the leading name in Snow Bike systems and accessories, has partnered with the Border Battle XC series to be the title sponsor for the 2018 season. As part of the agreement, a complete Timbersled kit will be awarded as a Grand Prize to one rider competing in all three rounds of the new Upper Midwest-based off-road series.

“We could not be happier than to partner with industry leader Timbersled,” said BBXC promoter Gary Walton. I’ve had the opportunity to spend considerable time on several models in the Timbersled lineup and as much as I enjoy snowmobiling, I can honestly say it was the most fun I’ve ever had on the snow. I have several moto friends who are now competing in the national Snow Bike tour and Winter X Games and Timbersled is their brand of choice, which says everything you need to know about the product.”

“Teaming up with an off-road motorcycle series is a great fit for our brand,” said Timbersled racing manager Tom Rager, Jr. The Border Battle series is right in our back yard drawing racers from Minnesota, Wisconsin, the Dakotas and Michigan. The off-road guys in particular are a key demographics for us as they are both trail riders and racers and have strong numbers of participants ranging from their teens to their fifties.”

The Border Battle XC series kicks off on April 29 at ERX Motor Park in Elk River, Minnesota, marking the first time the facility has hosted an off-road motorcycle event. A point structure is currently being formulated to combine results and number of riders within a class to make the Grand Prize open to anyone competing in the series.

For more information about TImbersled or to find your local dealer, visit their website: www.timbersled.com