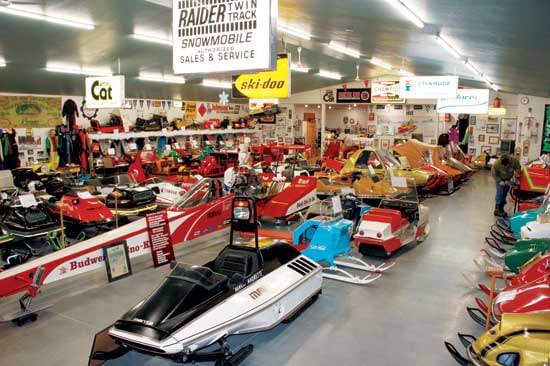 After the Bombardier Museum in Valcourt, Quebec donated 33 of their classic and antique snowmobiles to the museum last year, the Top of the Lakes Snowmobile Museum in Naubinway, Michigan was both excited and challenged upon the arrival of the sleds. The additional sleds was a feather in the cap of what is believed to be the largest snowmobile museum in the United States, but they were already busting at the seams with other sleds and had no where to display them. Thus began the quest for finding additional funds and construct a new addition to the museum. With a grant secured from the Michigan Department of Natural Resources along with other donations from local clubs and individuals, the museum secured enough of the estimated $110,000 needed to break ground on the future addition. While the ground breaking marked an key milestone, the museum still needs to secure approximately $80,000 to meet the total financial requirement. To learn more about the Top of the Lakes Museum, the sleds donated by BRP, and to make a financial contribution towards the addition visit them at Snowmobile Museum.