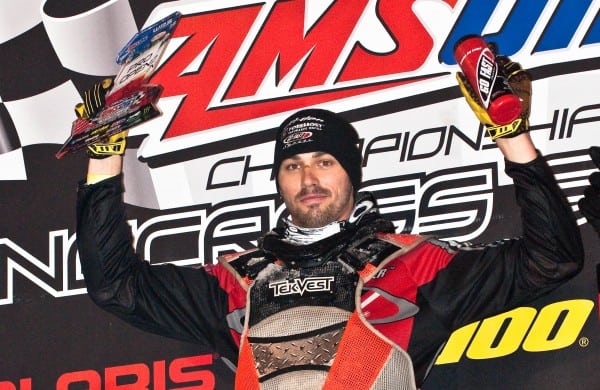 The moving, shaking, and drama of the racing off-season started early this spring, as teams, racers, sponsors, and manufacturers jockey for premium position and the upper hand well before the first race of the forthcoming season. Long time team owner Steve Scheuring from Auroa, MN took the first stab at shaking up the status quo by signing last winter’s ISOC Pro Open champion Tim Tremblay. Here is how the official team word saw it shake out:

Aurora, MN (May 9, 2012) Steve Scheuring, owner of Scheuring Speed Sports, is pleased to announce the signing of defending AMSOIL Championship Snocross Series Pro Open champion Tim Tremblay. The two time Pro Champion will join the reigning Team of the Year for the 2012-13 ACSS tour, racing out of the AMSOIL/Ski-Doo trailer alongside top pro riders Robbie Malinoski (third overall in points) and Pro Rookie of the Year Darrin Mees.

“With the addition of Tim to our race team, and with Robbie and Darrin already on board, we will be a force to be reckoned with this year,” said Scheuring.

For Tremblay, the move is one he believes will bring continued success and stability as he enters the prime of his career.

“Steve Scheuring has a true professional race team and his team never stops working on being better, and that is the team I want to race for,” said Tremblay. “The AMSOIL/U.S. Air Force/Rockstar/Ski-Doo sleds they put together came out of the holeshot strong at every race last year. And the way the Fox Shox handled the rough national tracks was impressive. I am excited to race for Scheuring Speed Sports and still stay with a great company like Ski-Doo.”

Since moving back to Ski-Doo, the AMSOIL/Scheuring Speed Sports team has been one of the most consistent race teams on the national circuit, finishing with two riders in the top five in points last year.

“Ski-Doo is a great company with a rich history of racing and winning,” said Scheuring. “We are constantly sharing ideas with the race group to develop and improve future products that will make there way to the consumer’s snowmobiles.”

The official unveiling of the new-look AMSOIL/U.S. Air Force/Rockstar/Ski-Doo team will take place at the annual Sno-Baron’s Grass Drags September 8-9, 2012.