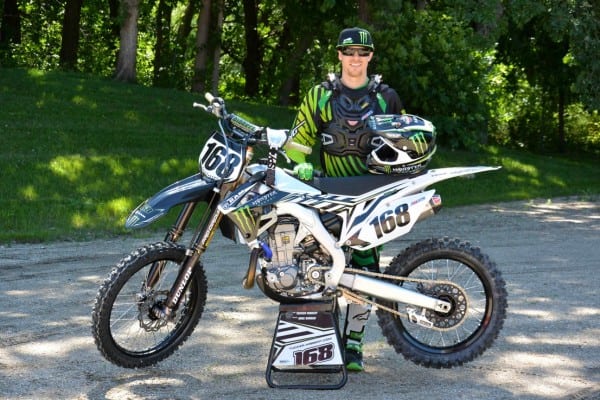 After three consecutive summers hampered by injury, and being able to race only one outdoor contest last summer, Tucker looks to prepare for the snocross season this year with five race campaign this summer. Here is the official word from the T-Train camp:

July 2, 2013 – Tucker Hibbert, the world’s top snowmobile snocross racer, is set to kick-off his 2013 Lucas Oil Pro Motocross Championship campaign this weekend at the RedBud National in Buchanan, Mich. RedBud will mark the first of five 450 Class events Hibbert plans to compete in this summer. Hibbert is coming off of one of the most successful snocross seasons of his 13-year professional career. In January, he became the first X Games athlete in history to capture six consecutive gold medals in an X Games winter event, bringing his snocross medal count to a record 11 overall. In late March, he clinched his seventh national snocross title and now holds 80 national victories.

Hibbert has competed in pro motocross events since 2000 and most recently finished 27th overall in his 450 Class debut at the 2012 Steel City National after a three-year injury absence. He scored his career-best 250 Class finish in 2008 at Spring Creek MX Park with 15th overall. His goal this summer is to break the top-10 for the first time in his career.

All the racing action from RedBud will be broadcasted live. The first 450 Class moto will be live on FUEL TV at 1 p.m. ET with the second moto on NBC at 3 p.m. ET. Additionally, both motos will be streamed free online at allisports.com/motocross

“I’m really excited about RedBud. It’s been a longtime since I’ve been able to line-up there and it’s one of my favorite tracks. It feels good to get back to where I used to be — spending the summer riding, racing and healthy. After three summers being injured, Steel City last year was really a test race for me. It felt good to get back into it but I didn’t do as well as I hoped. I learned a few things and this year, I’m focused on getting my results where I know they can be. I know racing motocross helps my snocross racing. Just by racing Steel City last year it helped push me into the snocross season sharp and strong. With racing five nationals this summer, I think it’ll make me even more prepared for this winter’s snocross season.”