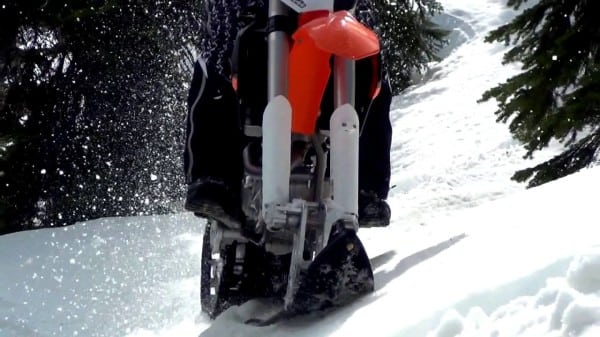 Just spoke to our pal and OSM spring test rider/camera hound Justin York on the progress of his UFO SnowBike concept. Last winter, in between riding, photography, eating, and sleeping, Justin was slaving away, hunched over his computer screen looking at CAD drawings and tweaking the final design of his own unique take on a motorcycle snow conversion. Unlike other designs, Justin’s uses the motorcycle’s suspension at the rear versus a more traditional tunnel /skidframe design as found on the Timbersled system. York told us the first 50 units were going into production back in July and he sent us this kick-ass video of spring testing his latest pre-production version.  The UFO bike will be available through Valley Powersports (208-682-4404) www.vpowersports.com