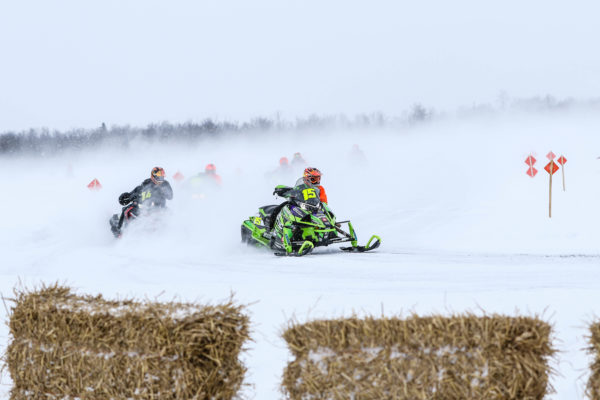 The USXC circuit started out their season this past weekend at the legendary Gerald Dyrdahl Pine Lake 200. Teams were eager to start the season and their racing showed it with all the classes being very competitive. This event drew races from as close as Gonvick to as far as New York state; all competing for the $10,000 pay day. 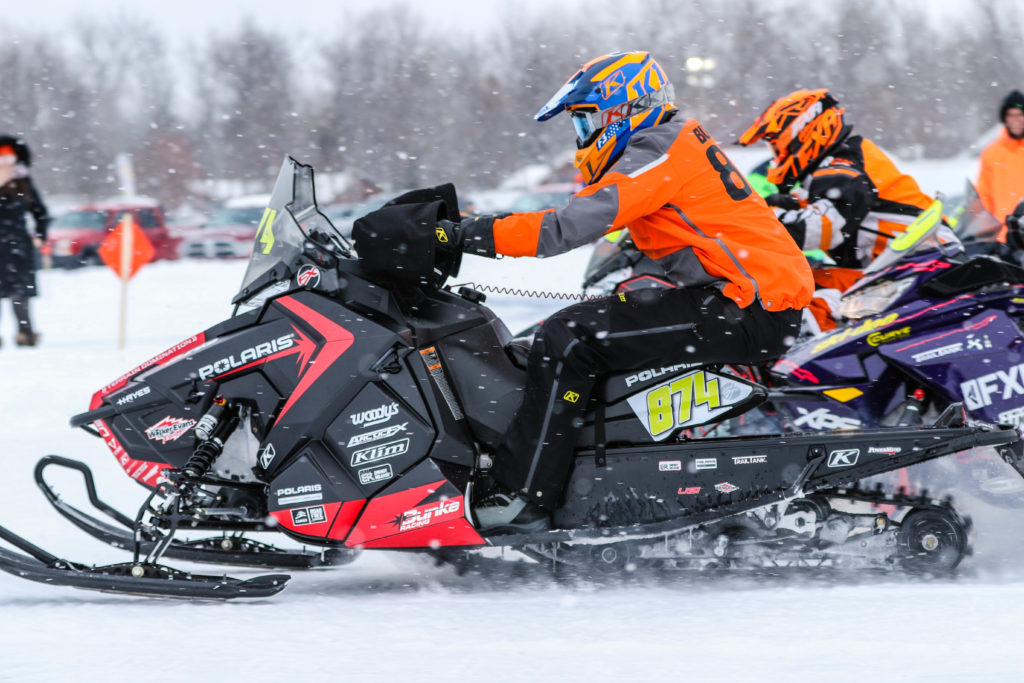 The pro open class started out the race weekend on Saturday with a 4 lap qualifier for their final later in the day. Arctic Cat’s Zach Herfindahl came out with the early race lead and claimed the top qualifying spot to start his year off. Polaris riders Travis Faust and Alex Hetteen were 2nd and 3rd in the qualifier. Caleb Nymann started his weekend off right with a win in the Sport 600 Improved on Saturday along with Leah Bauer taking home day 1 in the Womens class. 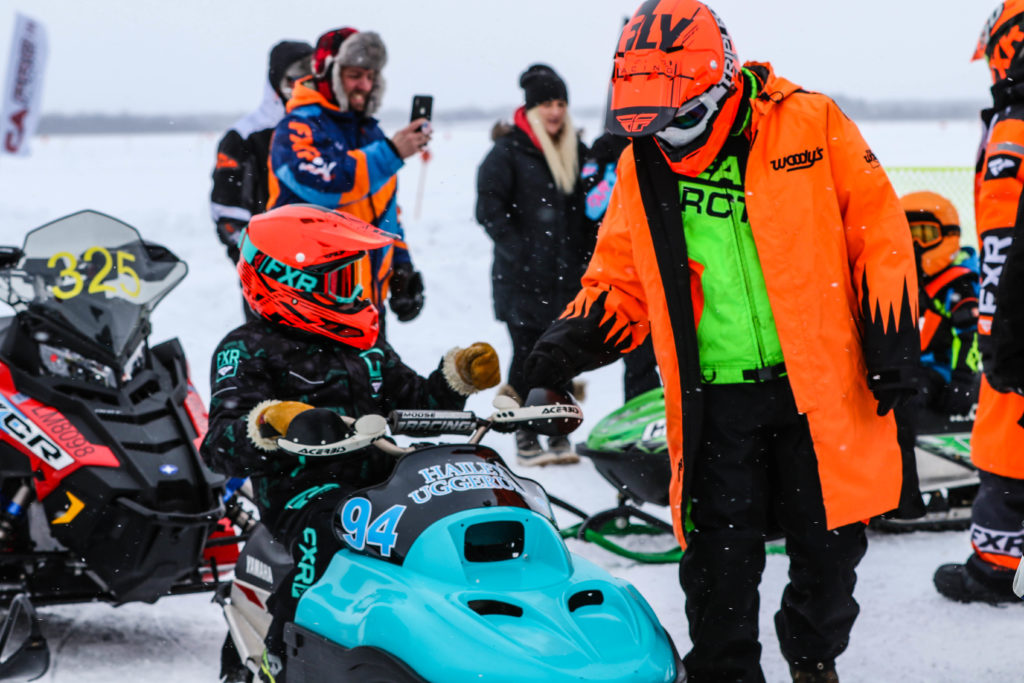 The classic and vintage sleds also had all their races on Saturday giving them a chance to show their speed as well. Collin Grover took the win over 2nd place Kyle Grover in the Vintage class. Tyan Derrick was victorious in the Classic IFS 1980-1998 class with Adam and Kellin Geisler in tow. Brian Brown showed speed in the Classic IFS 50+ class taking home his first win of the season.

The Semi Pro Factory 600 class had their qualifier on Saturday in preparation for their heads up final on Sunday. Gunner Arlaud took the #1 qualifying spot with Dustin Schwandt and Abe Olson round out the top 3. The rest of the front row was set with Grant Weber, Dustin Dohrn, and Boe Bunke.

The last race of the day was the Pro Open final which always draws intense racing. The #1 qualifier Zach Herfindahl claimed the early race lead but ran into trouble with his sled on lap 2 which lead to an off and a unfortunate DNF. Wes Selby quickly made his way to the top 3 from the back row after just 1 lap. After Herfindahls off, Selby took over the lead. Dillan Dohrn and Chad Lian both took a DNF after lap 3 ending their day. Back and fourth race took place behind Selby but no one could catch him. Wes Selby ended up taking the win with Alex Hetteen in 2nd and Justin Tate rounding out the podium. 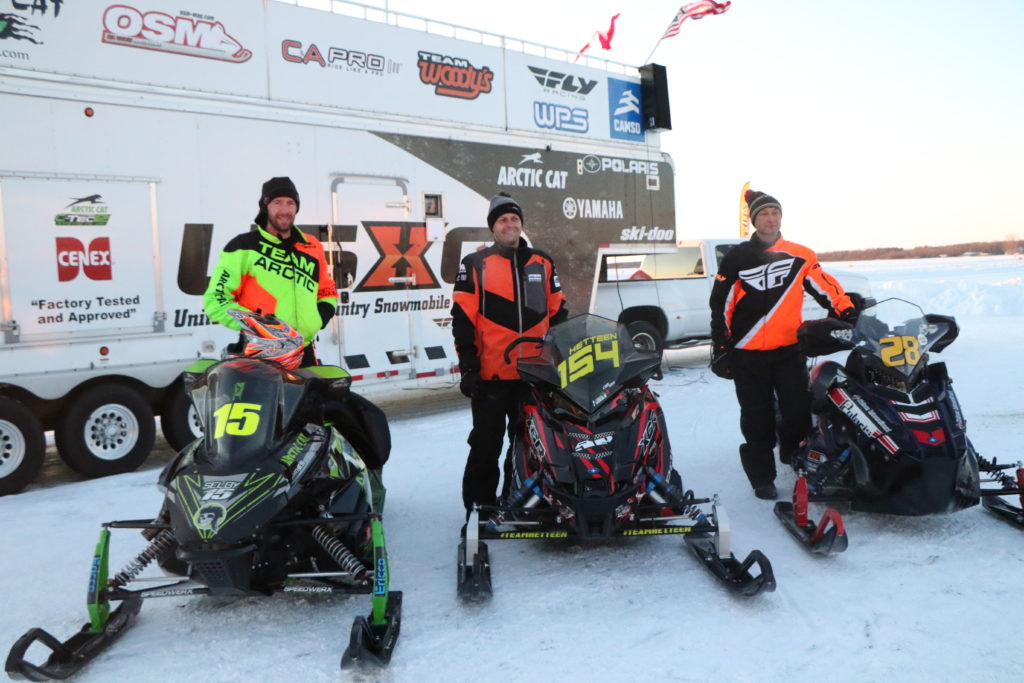 Sunday morning brought snow flurries, flat light, and a slight wind for racers to complete the Gerald Dyrdahl Pine Lake 200. The first race of the day was the Pro Stock 600 qualifier. Ross Erdman and Dan Revering were the first two sleds off the line. With this being a timed race, Canadian rider Aaron Christensen showed speed right off the start further back in the pack. Andy Wenzlaff had an off at the beginning of lap two ending the Wisconsin riders weekend. Former Pine Lake champion, Corey Davidson also had issues during the qualifier putting him in the back row for the final. Chistensen and Herfindahl continued their winning ways from last season putting them in the 1st and 2nd qualifying spots for the final. Selby, Hetteen, Bunke, and Erdman make up the top 6 (and front row) qualifiers. 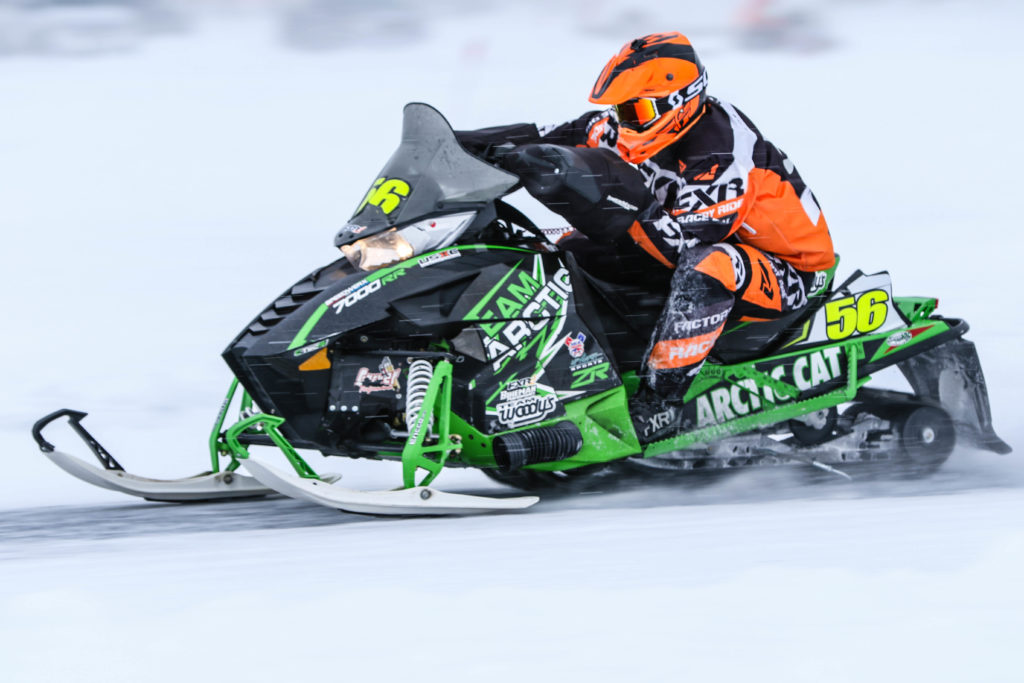 The next race of the day consisted of the 2nd day of the Sport 600 and Masters 50 class. Boe Bunke came out to win in the Sport 600 class after being injured for most of the season last year. He took the overall win for the weekend on his Polaris with Evan Peppel in 2nd and Caleb Nyquist in 3rd. In the Masters 50 class, Glen Arlaud claimed the weekend win with Jim Sobeck in 2nd and David Wandschneider rounding out the podium. 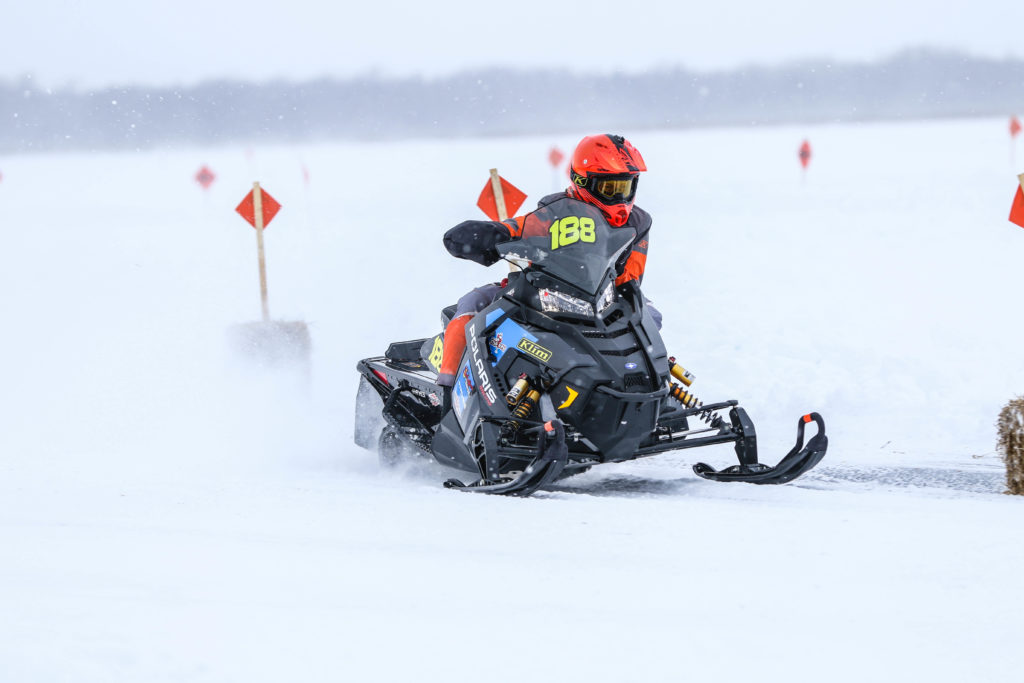 The Semi-Pro-heads up final was the next class on the track. Boe Bunke, in his Semi-Pro debut, got the whole shot and took the early race lead. At some point during the opening lap, Bunke lost his fuel cap and was forced to hold his hand of the tank opening. At the end of lap on he jumped off his sled and fuel spilled which caused his sled to go up in flames. This would result in a DNF for the Rookie. Gunner Arlaud took over the race lead and ran away with it. With no one able to keep up, Arlaud took the Semi-Pro victory. Dustin Schwandt took 2nd and Dylan Stevens claimed 3rd making in an All Arctic Cat podium.

Next, the Masters 40, Women, Sport 600 Improved and Expert 600 Limited classes all had their 2nd round of racing for the weekend. Craig Ritzinger claimed the Masters 40 title with Todd Severson and Scott Preston 2nd and 3rdoverall. Leah Bauer had an impressive run this weekend on her Polaris earning her the womens title this weekend with Jill Hetteen in 2nd and last years points champion Lydia Sobeck in 3rd. Even Pepple claimed the Sport 600 Improved class Jesse Hallstrom taking the Expert 600 Limited title. 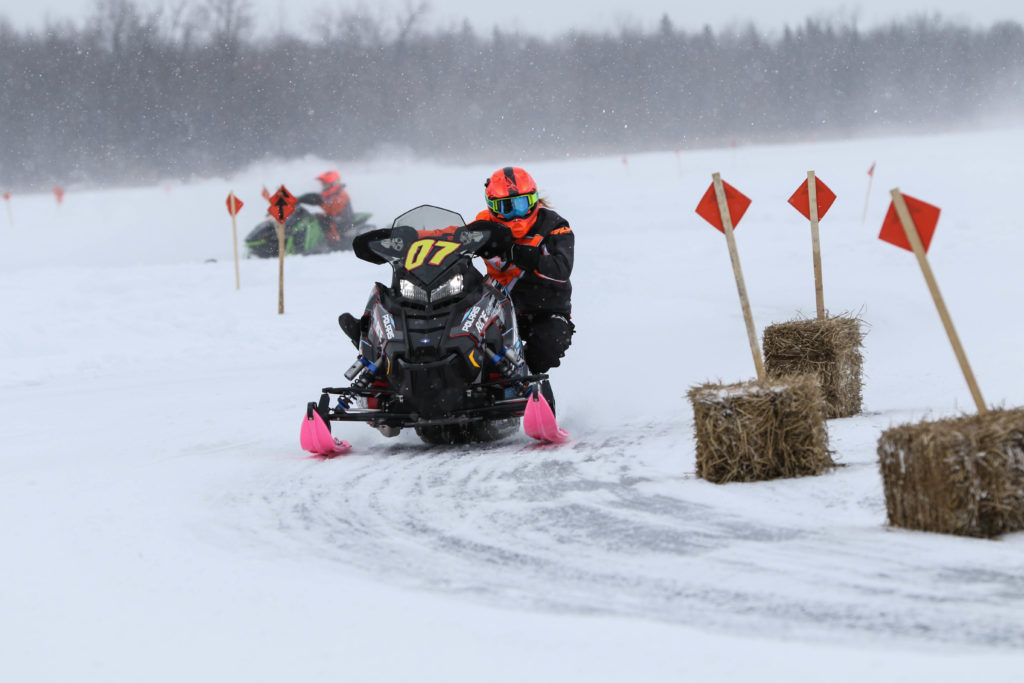 The last race of the opening weekend for USXC was the Pro Stock final with the chance to win $10,000. Sixth qualifier, Ross Erdman, made a sled change which forced him to the back row for the heads up start. This change put Chad Lian on the front row of the final. Wes Selby got out of the gates quick giving him the early race lead. Chad Lian was shortly behind and stalked Selby for a few laps without making a pass. By lap 4 Lian took the lead and nobody could stop him. After lap 5 the top 3 were Lian, Christensen, and Herfindahl. By lap 9 Selby got around Christensen after everyone fueled put them 1 lap to the checkered. On lap 10, Herfindahl made out a lot of time on Lian making in a race to the finish. Herfindahl gave it his all but was less than 2 second short. Chad Lian was crowned a first time Gerald Dyrdahl Pine Lake 200 champion and $10,000 richer. 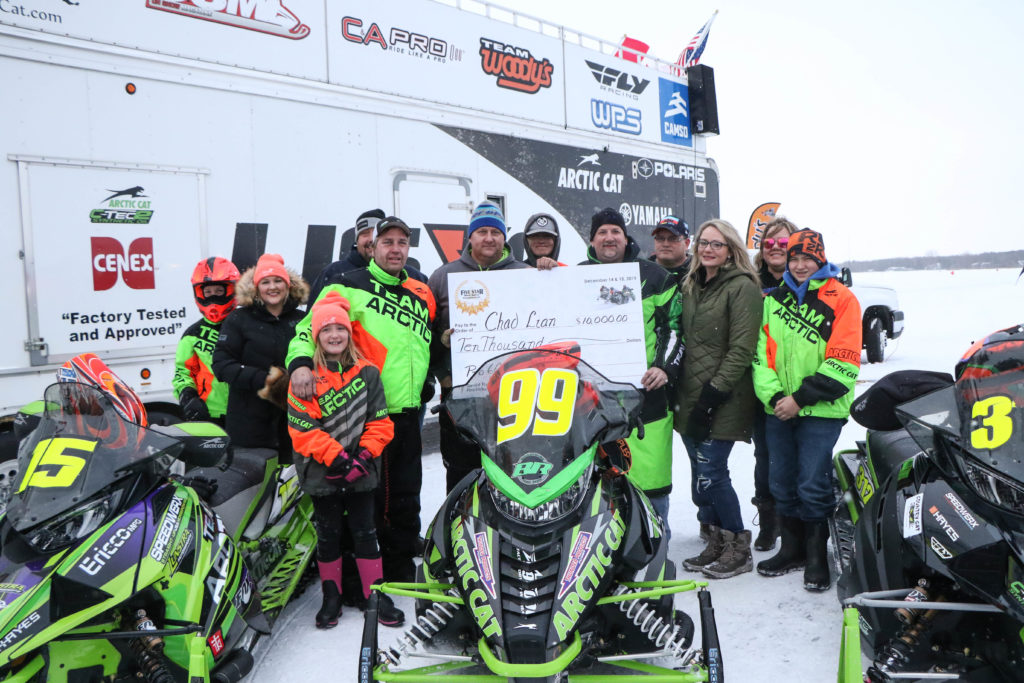