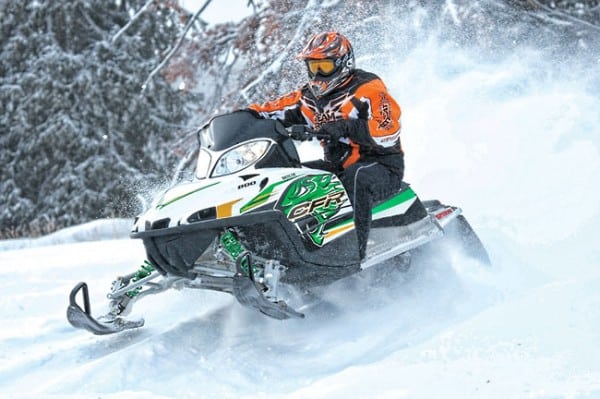 There’s never a time you’re not looking forward to riding the 800 HO CFR and frankly, that’s a good thing. Sure the low-slung Cat may not offer all the latest buzzwords and acronyms found on newer chassis offering from Cat, but it doesn’t have to, the CFR just works.

No doubt one of the best attributes of the CFR is the big, beastly, four-plug 800 Suzuki, which leaves little doubt, is making all of it’s claimed 162 ponies. The Cat reminds you of this too at feeding time, especially when you spool the cap off the oil-injection reservoir and replenish the black crude used to lubricate the beast. I’ll admit, when a customer is looking to purchase a large displacement performance machine, it comes with the expectation a few more greenbacks will be required at the pump, but the CFR’s thirst for lube is a bit of head scratcher compared to other big bore two-strokes on the market. Plus, if fuel economy is that important to you, then stop looking at the big boys and their thirst for dead dinosaurs, and turn your attention to a four-stroke or efficient 600cc two-stroke.

Last season’s all-new 800HO motor featured a lightened crankshaft, new piston/ cylinder profiles and dual plug head design that together made for a stout mill that will not disappoint when the scenery opens up in front of you and you opt to do the same. At idle, the big twin rumbles like a bag of rocks in a dryer, similar to an American made V-twin motorcycle, making things like ski-tips and handlebars gyrate like a Jane Fonda workout video. The fueling appears spot on once you get above 3000 rpm, but below that there is an inability to stabilize the idle and a really muddy spot at initial throttle tip in. But once under way, all of these idiosyncrasies fade away, especially when riding in areas of open spaces where CFR can stretch its legs.

Obviously with the introduction of the new ProCross chassis, as well as the comfort focused Twin Spar chassis, the CFR chassis is clearly not the latest available option from Thief River Falls. That being said, the light steering effort and acceptable suspension is just that.

While riding an all too often pounded out section of ditch line on a Sunday afternoon, I had my first “episode” with the Gentle Giant.  With impact occurring at a speed faster than that of cars on the adjacent paved road, the impact sent the front end skyward. At this point it was duly noted when to back off the throttle and when to let the 800HO do its thing. In smaller trail chatter or your average chopped trail, the balance between front and rear suspension works well and can absorb typical trail debris without upsetting its stride.

In an effort to improve compliance, I increased the torsion spring preload to stop the rear arm from bottoming as frequently, but found the front end lost its stellar composure. This forced me to go back to a softer setting on the torsion springs and increase the front track shock spring preload by about 7mm. This helped deliver a more impact resistant ride, but slightly reduced the classic flat cornering traits Cat is known for.

Beyond the ride, it’s the rider position on the CFR that will take you back to a “deep-in-the-knees” feeling seasoned riders will remember with some degree of fondness. There really isn’t anything bad about this “classic” riding stance, that is until you are introduced to a rough section of trail, at which time you’ll be unseated an/or forced to hold yourself in a “float” over the seat riding style until smooth terrain returns.

Cat had a great thing going with the adjustable handlebars and we were sad to see the quick adjust go away on the new breed Cats.  But as is the case with any ergonomic relationship, some riders will find the reach to the throttle and brake lever a bit excessive on the CFR, which detracts from just how nice the bar bend really is.

The stock seat is well padded and even offers up a trunk in the rear with ample storage area,. But a combination of too-low seat and the fever to dig into the always thick Arctic Cat accessory catalogue, prompted me to install the M-style seat, cushioned knee pads against the well contoured console, and a rear storage compartment. This combination dramatically improved the ergonomics of the CFR and really alleviated the knee pain of my well-cured body while making the machine more touring friendly. The M-seat allowed me to feel more “on top” of the machine instead of inside of it, and having the storage bag on the back just made it more viable for a weekend excursion or the daily commute.

Like a lot of newer sleds, the 800CFR doesn’t have one large glowing fault, at least not one that you can’t work around. When I wanted to go for a short blast with the guys – it answered; time to pack it up for a three-day excursion – the CFR delivered with above average comfort and stability.

For the 2012, the low slung chassis and the CFR is little more than another page in Cat history, but the big twin 800 has become a centerpiece of the line-up. With that in mind, throttle control should manage the impact at the pump, and hopefully refined calibrations will reduce the thirst for Saudi crude under the hood. J