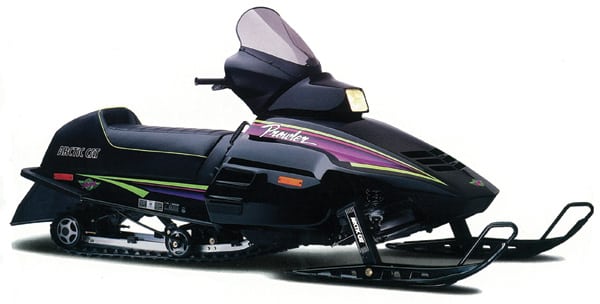 Color: Deep Cat black, with purple and green accents… what else would you expect?

Ambitions: To live up to expectations set by my 1990 EXT Special predecessor.

Dark Secrets: After winning the legendary I-500 cross-country race in 1990 with Kirk Hibbert piloting a 1990 EXT Special, a rule change forced Cat to abandon the successful EXT in favor of a hopped up Prowler, appropriately named the Prowler Special. While somewhat successful in consumer trim, the 1991 (shown here) and 1992 Prowler Specials came up short on the racetrack; most notably during the 1992 I-500 where once again, Kirk was battling his long-time foe, Jack Struthers. With the finish line approaching on day three, the Prowler Special suffered a broken spindle, putting an end to Cat’s hopes. It was after that moment of defeat that Arctic Cat brass decided to pursue a new competition minded snowmobile, and the legendary ZR chassis was born.