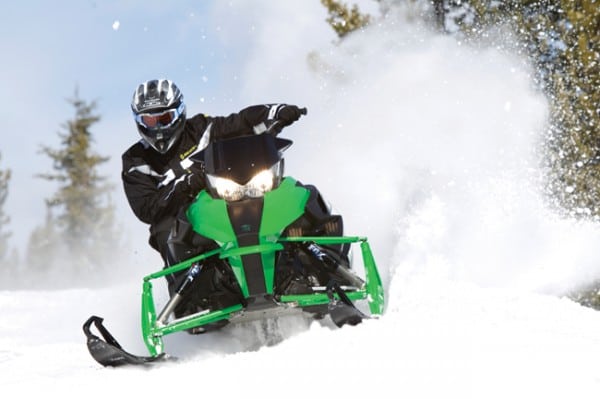 With Ma Nature being uncooperative, our resident wrench is forced to drive his cage to work, and tow to the snow. Snow Gods be damned! With winter playing peek-a-boo and a back yard stacked with OSM buggies, my daily commute during the early stages of the 2011-2012 winter has involved far too many raspberry filled glazers and 20-ounce cups of Super America coffee sludge. Finally, with the big lake (Superior) having been tickled with a cold breeze, and producing a somewhat paltry amount of snow on the western shores of Upper Michigan; the south of the border OSM crew has been towing to snow, every chance we get. Subsequently, my daily commute has taken a backseat to weekend warrior rides. Still, as the miles tally, impressions are being made.

On a recent load and tow to the jutting land fingers of Michigan, after a fresh coating of nearly 12-inches of the elusive white stuff, the all-new Arctic Cat F800 in Sno-Pro trim came along for the ride.

Much of Michigan’s Upper Peninsula is comprised of converted railroad routes, with small loops jutting out and back from the main corridor. Most of the trails encountered were groomed, yet were experiencing heavy traffic, creating numerous sections of deep chatter, holes, and even the occasional open creek crossing. Despite the less than ideal conditions, more than 470 miles were logged.

The railroad grade is where the big twin Suzuki motor can really stretch out and cover terrain with more fury than a locomotive. While a beast when warmed, and jamming large quantities of fuel and air into the combustion chamber, the big twin mill starts the day spewing more two-stroke smoke than seems necessary. Once warmed however, the Suzuki 800 runs crisp. With no electric start available, the motor seems to spool to life slowly when the ripcord is pulled once, sometimes twice, and even occasionally, three times a lady. Initial throttle tip-in creates a gurgle before smoothing out, and this was especially noticeable during the first movement of the day.

Drive-away clutch engagement is a bit harsh and hints at a potential appetite for belts, but the under seat spare was never needed, and the motor seemed to smooth as the miles clicked off. Whether real or perceived, the motor is loud compared to other new sleds on the ride, yet the consumption of fluids was surprisingly low and very close to a certain direct injected yellow buggy, also along for the ride.

The seat/cockpit was set up with the handlebars a bit low for my liking, so a quick trailside stop to adjust the angle really helped my comfort level. The front end works excellent in the bumps, but was lacking complete confidence when cruising rutted rail grades at “ticketable” speeds. Once in rough terrain, I forgot about the nervous feeling and was able to apply more finesse to the 128-inch rear skid, but still with more muscle than I would have liked. Part of this could be linked to front suspension geometry that seemed passive during initial turn-in. Another quick trailside stop was made and the front FOX Float pressure was lowered to 60psi. This change allowed the front to roll more and also stay planted better when railing a corner.

With the bars in place, Float pressure adjusted, and the general “get to know me” out of the way, it was time to rally. The new tapered tunnel has helped rid the Pro-Cross from the ‘straddling a horse’ feeling associated with the previous twin-spar chassis, but it could be made even better with a tapered seat. By adding a 45-degree taper to the seat’s edge, the narrow feeling of the tunnel could truly be appreciated. When moving far forward on the seat in technical sections of trail, the console forces your legs to be splayed widely, and once again, seems counterproductive to having a tapered narrow feeling tunnel. Still, with that being said, if you are jumping side to side through twisty sections of trail, the footwells and console are not obtrusive either. The large gap in front of the handlebars offered an area to warm up the goggles during pit stops, as engine bay heat poured out from the opening. This same opening could also be the partial culprit for excessive engine noise.

Radially mounted brakes have been the braking buzz in high-performance street motorcycles for several years, and has helped usher in improved feel and performance in most instances. Hoping to experience similar results on snow, the long-reach, non-adjustable lever found on the Pro-Cross Cat yielded good results, but without any significant positive feedback. This most likely can be attributed to both the drive shaft mounted rotor, which lacks mechanical advantage over a jackshaft, and the larger diameter 5/8-inch master cylinder piston. While certainly not lacking braking power, a bit more refinement could result in brakes that are a step above the status quo.

The rear suspension seemed to work well on trail chatter, but it also felt as if the motion ratio of the rear arm or shock valving was ramping up too quickly, and not allowing full stroke without some serious pounding or punishing treatment. It could be that the front end is working so well, that the rear needs to catch up, but we were also running the SnoPro version of the machine with firm calibrations designed for aggressive riding, deep holes, and large square edged bumps. With some additional tuning and calibration aimed at achieving full stroke and a more “bottomless” feel, the new 2012 F800 will be a winner in many respects. J