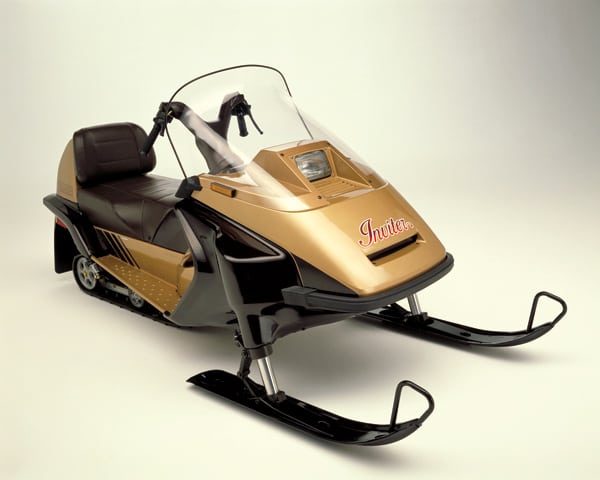 Ambitions: World snowmobile peace and industry acceptance and respect for snowmobiles of all colors, especially gold.

Favorite Songs/Musicians: Walk the Way – Run DMC/Aerosmith, Rock Me Amadeus – Falco, and anything by Lionel Richie

Dark Secrets: During the mid 1980s, Yamaha struck upon a streak of goodness. With Arctic Cat bowing out of the picture briefly as they got their financial house in order, and Polaris developing the IFS Indy, Yamaha captured everyone’s imagination with a series of uniquely different snowmobiles led by the 1984 Phazer. It was this formula that led Yamaha to gain the number one market share position. With this newfound responsibility, leadership, and pressure, the company began to introduce vehicles that looked to expand the industry, and more specifically their leadership and sales, led by the odd looking Inviter. The Inviter was built to deliver ride attributes that directly paralleled how enthusiasts “actually” rode – 30-mph, negotiating twisty, wooded trails. Unfortunately Yamaha product planners failed to recognize the massive snowmobile ego, the one that may trail ride at 30mph, but wants the capability to blister it at 100mph. While the Inviter never took hold during its run from 1986 to 1990, it has become a collectable oddity today due in part to its funky one-up styling, single cylinder liquid-cooled engine, upside-down airplane steering yoke. Recognizing their market miss, Yamaha engineers reversed course 180-degrees and then some, and in 1992 gave the snowmobile ego its snowmobile with a four-cylinder muscle sled dubbed the Vmax-4.