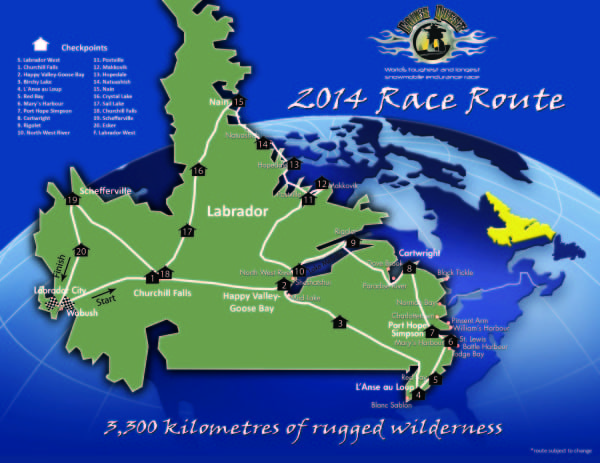 The race kicks off in Labrador West on March 1 and continues through 20 checkpoints, first bringing racers through central Labrador to L’Anse au Loup on the south coast. From there, they will start a northern journey through many coastal communities to Nain before making their way back to Labrador West.

“We are excited about the new route,” said Todd Kent, chair of Cain’s Quest Inc. “We want to offer racers an extreme snowmobiling experience while showcasing Labrador’s beauty, from the iron-rich Labrador trough, to the bogs, hills and valleys in the south and the fiords and mountains in the north.”

Twelve teams of two have registered to date. One will be travelling all the way from the remote Arctic city of Iqaluit, Nunavut, the first team to register from that territory since the race began in 2006. The remainder comes from Labrador, Quebec, Ontario, Saskatchewan and British Columbia.

“We are hoping that this route, combined with a hefty purse of $100,000, will attract 40 teams before registration closes on December 31,” said Mr. Kent.

A race of this magnitude requires many months of planning and coordination. ViVa Group, a new communications and event management company in Labrador West, was recently hired to assist the organizing committee with all race details.

“We both bring a great deal of experience to the team,” said ViVa owners Krista Norman and Kelly Nippard. “We, along with our associate Brittany MacIsaac, are thrilled to work with such a dedicated group of volunteers to elevate the 2014 race to a new level.”

For more information on Cain’s Quest, including how to register or volunteer, visit www.cainsquest.com Follow us on Twitter @cainsquest, use #cq2014 or join the conversation on our Cain’s Quest Inc. Facebook page.