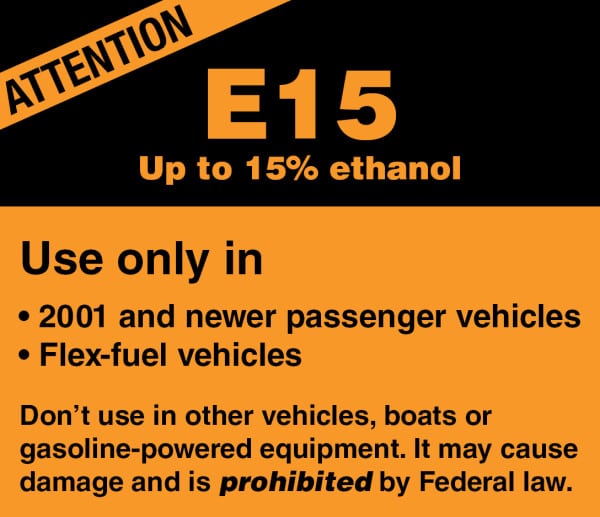 Haslett, MI, September 19, 2013: The US Department Of Energy (DOE) released a study conducted by Michigan Technological University which was designed to evaluate the effects of E-15 fuel on current and legacy snowmobile engines and vehicles. Three test scenarios were conducted to evaluate the impact of E-15 including cold-start performance and emissions; snowmobile drivability; and laboratory exhaust emissions over the useful life of the engine. Eight engines were tested over a two year period. The vehicles were tested in the laboratory and on the trail in real life driving conditions.

The conclusion of the testing by the DOE is that E-15 fuel is NOT approved for snowmobile use. Observations made during the study support the US EPA’s decision to NOT APPROVE E-15 fuel for snowmobiles.
The testing was conducted since E-15 fuel is being introduced into the marketplace and is viewed by some as an important fuel enabling the United States to achieve the goals of the Reformulated Fuel Standard passed by the US Congress.

Ethanol is being produced throughout the United States. Ethanol producers use corn, switch grass, and other related plant products in the production of ethanol. It is the directive of the present administration that 13.8 Billion Gallons of ethanol be produced and distributed in the marketplace. The goal is challenging because US Gasoline consumption is declining rapidly.

Since it appears the E-15 fuel will be made more readily available throughout the United States, it is important that owners of snowmobiles and of other gas-powered products realize that E-15 fuel may impact on the various engines.

The 69 page study highlights that one of the key issues related to snowmobiles is that exhaust gas temperatures and muffler exit temperature consistently increase with the use of E-15 fuel. The increased temperatures range from 15 to 40 percent, depending on the vehicle. This rise in temperature occurs because of the leaner air – fuel mixture.

Since it has been recommended that E-15 not be approved for snowmobile use by the EPA, there is concern in the marketplace that mis-fueling of snowmobiles can occur. Recent surveys show that approximately 50% of all Americans fill up their portable gas tank or vehicles that they are towing with the same fuel used to fill their tow vehicle (car or truck). Also approximately 2/3 of all Americans say that they assume that any gas sold at a gas station is safe for all of their vehicles – including snowmobiles, generators, boats, etc. Approximately 50% of Americans check the fuel pumps for warning labels when filling up their vehicles.

With various fuels entering the marketplace, it is more important than ever that customers carefully read any and all labels on gas dispensing pumps and understand the guidance messages placed on those pumps.

It should be noted that E-85 fuel has been available in the marketplace for many years. E-85 is a blend of fuel which is designed to be used in flex-fuel equipped cars and trucks only. E-85 is 85% ethanol. It should NOT be confused with E-15 which is 15% ethanol. E-10 fuel is 10% ethanol and has been available and used throughout the United States for years and is approved for snowmobile use.

THE CONCLUSION OF THE TESTING BY THE DOE IS THAT E-15 FUEL IS NOT APPROVED FOR SNOWMOBILE USE.
The complete study is available online at http://www.nrel.gov/docs/fy13istu/60115.pdf