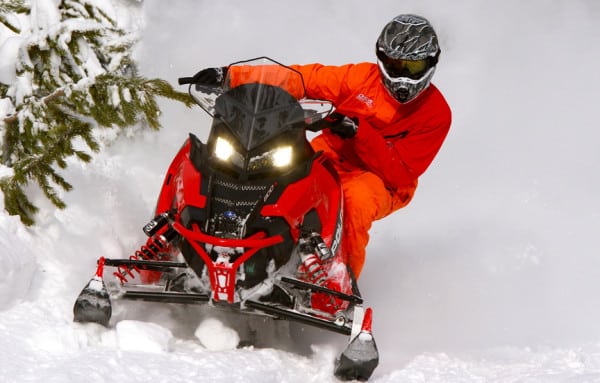 The crew from Roseau told us 93% of the platform on the new Rush and Switchback models is new, and aside from claims of being better in nearly every way, a host of impressive ideas in the name of service access, belt/plug holder, LED lighting, and high tech LCD gauge package with integrated GPS has been thrown into the mix as well. But overlook all the flash and new plastic and what most of us really wanted to know was it truly better, especially in areas of small bump compliance, steering effort and handling. Both the Switchback and Rush come in two suspension variations dubbed Pro-S for trail honing and Pro-X for big bump dominance. As aggressive and menacing the Pro-X version was to look at, we never felt comfortable enough with its handling traits to feel as though it begged to be pushed harder. Twitchy and unpredictable high-sides and abusive chassis chatter in small to mid-height bumps was unsettling to say the least. Steering effort was much improved, but the unsettled handling made it hard to judge any improvements in the handling realm. On the flip-side, the Pro-S version in both Rush and Switchback models was much improved, with suspension calibrations that worked well from chatter to craters. Handling was also very flat and predictable, with light steering effort and predictable initial turn-in traits. One possible reason for the huge discrepancy between the Pro-X and Pro-S could be the taller front shocks (1.5-inches) found on the Pro-X. The taller center of gravity and more aggressive calibrations seem to be a step backwards in the progression chain. Our vote, go with the Pro-S and let the Polaris crew get another season of calibration under their belts before opting for the Pro-X ego ride.