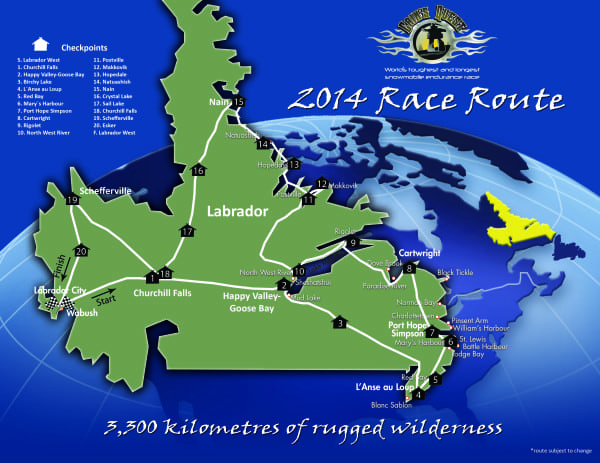 The Event Organizers at Cain’s Quest Inc., announced a roster of 30 teams of two who will brave the 3,300 kilometres of Labrador’s wilderness during the 2014 Cain’s Quest Snowmobile Endurance Race, set to start in Labrador West on March 1.

Click here to see the complete details of the 60 racers (30 teams of two) who are brave enough to sign up, and race in the world’s toughest and longest snowmobile endurance race known to the sport.

Represented in the 30 teams are the provinces of Newfoundland and Labrador, British Columbia, Saskatchewan, Ontario, Quebec and Nunavut. Some are embarking on this race with relatives while many are friends who share a passion for extreme snowmobiling.

into Southern Labrador and some new teams who have never snowmobiled in Labrador before,” said Todd Kent, chair of Cain’s Quest.

Cain’s Quest is the world’s toughest and longest snowmobile endurance race. It is an incredible off-trail riding adventure where teams of two battle in an all-out race through deep snow and thick wooded areas in some of the most remote parts of Labrador. This high-energy race will push both racers and their snowmobiles to the limit as they travel through rough, ungroomed terrain while dealing with extreme temperatures, which has been known to dip as low as -40 degrees Celsius that time of year.

“The 20 checkpoint route is no doubt demanding,” said Todd. “But it will offer some of the most spectacular scenery in the world.”

It is expected that the route will take five to six days to complete. Teams will be equipped with satellite trackers so that fans can track them on-line as the race progresses.

A big celebration is being planned for teams upon their return to Labrador West, which includes a ceremony and concert headlined by Canadian classic rock icons, the Stampeders, on March 8. The group is best known for hit songs like “Sweet City Woman” and “Hit the Road Jack.” Tickets for the dinner and concert will be available to purchase by mid-January.

“The Stampeders will be a great finish to the week,” said Todd.