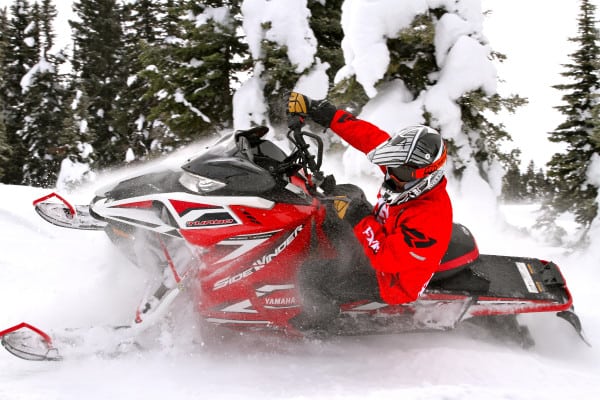 Technology laden is the best way to describe the new Genesis Turbo, the kind of engine that makes powertrain geeks and engineering students giddy. Its a Dairy Queen® Blizzard® whipped and blended with every deliciously sweet concoction imaginable and goes down with a sugar hit that is both bold and smooth.

While we could spend pages detailing the inner workings of the new Genesis motor, there are some key attributes that play an important part in the horsepower symphony. It starts with a first of its kind intake manifold that touts a triple throttle body design; something according to Yamaha is unique for a turbo application. The idea behind it is to address a primary performance goal for the new engine to not “feel” like a “traditional” turbo engine. The big culprit of most turbo engines is what is referred to as turbo lag, the hesitation from when you crack the throttle till the exhaust gasses can spool up the turbo and produce the forced induction power a turbo engine is designed for. In the words of Yamaha engineers, “The more seamless and predictable the power delivery…the better the inherent handling and control will be.”

The added traction available on Sidewinder BTX models with the all-new 153” x 1.75” Backcountry track makes it easy to stab the throttle and initiate sky launch at a moments notice.

At the heart of the system is the turbo charging unit itself, a high-temp nickel alloy body housing a lightweight iconel impeller rolling on a ball bearings that have been ceramic coated to withstand the crazy kind of heat a turbo can produce. While we never proclaimed to be anything remotely resembling a metallurgist (but we do know our way around a aluminum beer can), the iconel compound is said to be ridiculously heat tolerant and won’t warp or crack in even the most extreme conditions.

The brain of the operation is no slouch either, the Yamaha Mitsubishi electronic control unit touts 9 sensors measuring track speed, ambient air pressure (or altitude), engine rpm, possible engine detonation, coolant temperature, throttle position at the throttle body, intake air temperature, manifold pressure, and boost pressure. The information from those sensors is then used to adjust ignition timing, fuel delivery, manifold air pressure, and boost pressure; the two latter work in tandem to deliver what is undoubtedly the smooth and predictable power traits of this engine.

Packing of the new Genesis Turbo is very compact, but despite using every available ounce of space, routing of wires and lines is done in tidy fashion considering just how much of it there is. This view is looking down atop the Genesis and its turbo unique triple throttle body design.

As mentioned previously, the problem with most turbo applications is what is commonly referred to as “turbo lag”. The increase in power a turbo develops is due to the “forced” air and fuel charge that is fed into the combustion chamber, thus creating a greater and more powerful combustion cycle without having to revert to more “old school” methods of accomplishing this such as bigger bore, higher compression heads, porting, etc. Instead, the turbo uses exhaust gas to spin the impeller which thereby creates a pressurized intake charge. The more air and fuel you can jam into the combustion chamber, the bigger the bang and the more power you make.

The challenge with a typical turbo application is when you hammer the throttle the “boosted” charge is not quite ready. With the engine running at low rpm’s, the exhaust flow is not sufficient enough to “spool up” the turbo impeller. Think of it as a chicken or the egg conundrum. In this scenario the engine has to come up to speed using a more “normalized” intake charge until the exhaust gas flow is sufficient enough to build enough boost pressure. This delay is the “lag” you feel and one of the primary complaints of a turbo charged engine. But what if you could keep the boosted intake charge in waiting; ready to feed the combustion chamber the instant you stab the throttle? That’s exactly what Yamaha engineers did.

Even in off-trail situations we were impressed by the Genesis Turbo’s ability to deliver manageable power versus the light switch variety we were accustomed to from big pony sleds in the past.

To accomplish this, there are two methods of boost control. One is the more traditional waste gate, which on the Genesis Turbo is controlled by an ECU monitored solenoid valve. The other key element is another control mechanism dubbed the Air Bypass Valve (ABV). Also actuated by a solenoid, this control monitors the intake manifold pressure and incorporates a “closed-loop” that retains boost pressure and thereby improves response time when you crack the throttle. The result is a motor that has all the expected “rush” of a turbo with nearly instantaneous response and perhaps even more importantly, power that is smooth and controlled or instant and aggressive…the choice is yours.

Editor’s Note: This story is an excerpt taking from the “All Hyped Up” feature from the September issue of On Snow Magazine. Subscribe or visit our online reader to read the entire article.