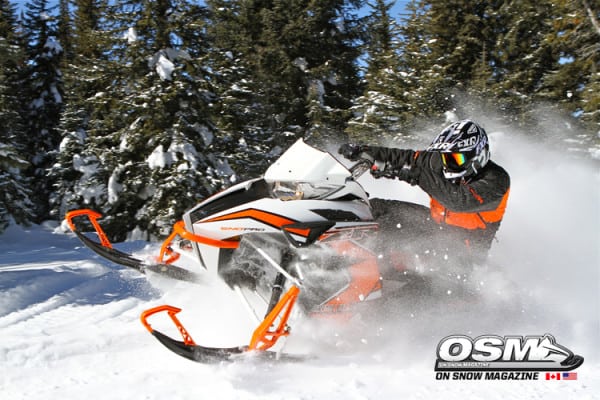 The crew from northern Minnesota is suddenly on the fast track to good times as they continue to refine the feline and deliver some of the best all-around sleds on snow. For 2016 all-new clutching from TEAM joins significant mountain advancements, an all-new line of utility sleds, and a new line of do-it-all CrossTrek models to satisfy crossover fans.

Team Clutching – If you’ve followed the Arctic Cat development of the ProCross and ProClimb chassis and the models built upon this balanced chassis, you probably know that early on there were some hiccups when it came to belt heat, belt failure and drive clutch durability.  Many of these issues were the result of excess heat being trapped inside the compartment (a problem associated with virtually all modern compact sled designs). Year-over-year, Arctic Cat engineers addressed the problem and as of last year, the Cat drive, driven and associated drive belts delivered power to the ground with nary a glitch. Yet the wheels of development kept churning behind the scenes and with that comes an all-new drive and driven system developed in cooperation with TEAM industries. The two companies (Arctic Cat and TEAM) are just a short drive apart and TEAM is recognized throughout powersports as the hands down experts when it comes to drive train development. With that, all 2016 Arctic Cat sleds with 6000 series engines and bigger will tout new drive and driven designs that frankly look to raise the bar in clutch technology for everyone. Featuring new extra wide rollers, a steel spider with much larger bushings and wear surfaces, and a new driven that eliminates the steel hub found on other designs, and instead features a spider spline-mounted directly to the secondary shaft. In total the system is extremely robust, is maintenance free and is designed to last the life of the sled…maybe longer. Watch for more details in a future issue of OSM.

Float Action Suspension – Much like the other manufacturers, Arctic Cat is proud of the significant changes they’ve made to their deep snow line-up of sleds for 2016. Along with the new spindles, A-arms and Mountain ski, they also made some significant changes to the Float Action skidframe found out back. With the goal of improving overall track tensioning and reducing weight, the improved suspension has several minor changes that all add up to a better performing system. For starters the front arm now features 1-inch more travel and revisions to the rear-arm pull rod results in a more progressive ratio. These two “big changes” delivers more consistent track tension throughout the travel range and helps to alleviate harsh bottoming. What’s more, the entire suspension is now lighter too boot.

3- Speed Transmission – With significant growth and the potential for a lot more in emerging markets such as Russia, all the manufacturers have been putting all lot of emphasis on utility/touring models. For 2016 nowhere is this more evident than in the Arctic Cat lineup where an all-new line of Bearcat models (ProUte chassis) and a standout Pantera XT Limited model (ProTour WT chassis) brings fresh style and extreme capabilities to a market that not long ago featured little more than hold-over technology. As part of this new surge of utility technology, Arctic will introduce the industry’s first three-speed transmission. With an easy to shift dash mounted selector, the tranny touts three forward gears including a “super-low” gear for mega towing and the ability to creep across deep snow at walking speeds…or even slower, without excessive belt slip. With this ultra low gear and the segments high flotation tracks and lugging four-stroke engines, the chances of getting stuck in even the worst deep snow, open tundra situations is virtually non-existent.

Vertical Steering Post – Another key change to Arctic Cat’s mountain sleds (save the 7000 four-stroke models) is a new vertical steering post. Gone is the telescopic design (except in High Country models) and in its place is a new simplified vertical steering post that sheds weight and reduces the “play” that often developed in the telescopic design. Another part of the change came to driver positioning. With the older design, many riders found themselves too far forward on the chassis, resulting in improper vehicle balance. The new steering post puts the rider in the sweet spot and serves up greater leverage and control.

Bearcat LT – The new utility/touring models in the ProUte chassis tout the smooth and powerful 1049cc engine from Yamaha, but there is one “smaller” version of the Bearcat offering dubbed the LT that brings in still more new technology. Powered by the same engine Cat uses in their Wildcat Trail offerings, the 700cc liquid-cooled twin cylinder Kymco built four-stroke serves up just-right power (65-horsepower) in this light utility gem that is super quiet, smooth, and dare we say…fun!

XF CrossTrek – The kids at Cat have been working at restructuring and renaming many of their models in an effort to simplify the mix and help all of us better understand their extensive line. For 2016 the XF CrossTour as we have known it in the past is gone and replaced by what can best be described as a one-up Pantera model complete with the rear tank and storage compartment. New to the fold is what Cat is calling the CrossTrek, a do-it-all sled built on the ProCross chassis with a coupled 137-inch rear suspension, 1.5-inch Cobra track, mid-height window with mirrors, rear tunnel bag, and collapsible side bags. With FOX Float 3 shocks, this is the one that we hope to find in our stable next winter.

M Series – Of course no mention of the new 2016 buggies from Cat would be complete without giving a nod to the new M-Series sleds. Aside from the utility market, it’s here where Cat has put the most emphasis on improvement. The combination of new spindles and A-arms, ProClimb 7 ski, increased caster steering geometry, and revised rear suspension has created a vastly better and easier to ride mountain sled. With engine options ranging from the C-TEC2 600 to the big power 1100 turbo, and track options including the big paddle 3-inch Power Claw on Limited models, the Cat stable is poised to climb higher on the mountain and in showroom sales next season.

ZR Limited – The latest ZR might slip under the radar for many avid trail enthusiasts but we needed to call attention to this model for one reason only…it works damn well. Year-over-year, Arctic Cat has quietly been tweaking the calibrations of the ZR and it keeps getting better. No doubt, the ZR continues to represent the heart and soul of the company that has been clawing back to respectability after the dismal years associated with the Twin Spar chassis when the brand seemed to literally walk away from all the things (lightweight, handling, speeed) that have long been known to be Arctic Cat staples. The latest ZR is light, balanced, fast, and now with continued calibrations, is a flat and predictable trail buggy. While we’d still like to see smaller and more concise ergonomics (they still seem to be built for giants) the ZR Limited with new FOX Zero QS3 coil-over shocks and three position piggy-back clickers is the best ProCross chassis ZR to date.