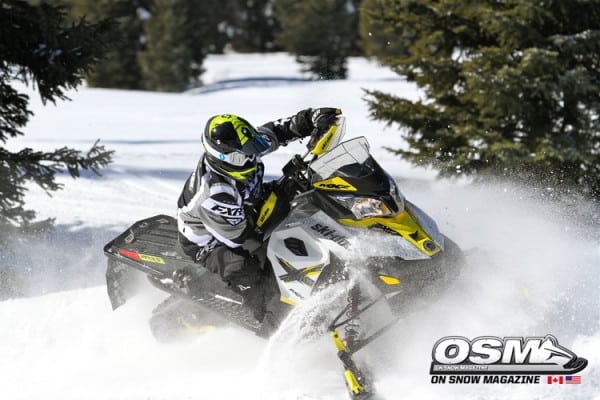 Once again technology leads the way for a company that prides itself on coming up with the next big thing. For 2016 the charge is led by a trick adjustable ski; the relaunch of the 1200 four-stroke; and a do it all new Enduro model combining rMotion with air.

Pilot TS Adjustable Ski – Our vote for cool new technology in 2016 has to go to the new Pilot TS adjustable ski. In typical Ski-Doo fashion, the finished piece looks great, functions with precision and after a day on the trails with the new “clicker” ski, we are “all-in” with the new technology. The concept is rather simple and falls under the category of “why didn’t we think of that”. A top mounted clicker dial similar to those found mounted on the running boards of quick adjust equipped rMotion suspensions, dials a carbide inserted “blade” up or down from the contact point of the keel. The range is just over one-half inch of adjustment with 20 clicks and the entire blade is easy to replace once the carbides wear out. We started our ride on rock hard, icy trails in the morning and dialed backed the carbide to a point where it just barely protruded past the keel. We still had precise control, nearly zero darting, and light steering effort. By the afternoon, the spring sun turned the trails to mush, but about 8 clicks on the dial had us honing corners with precision. Good stuff for sure.

1200 iTC Throttle – Ski-Doo first offered their version of throttle-by-wire on their efficient line of ACE motors and now the technology moves over to their big gun 1200 four-stroke. 2016 marks a relaunch of sorts for the 1200, with the engine now being stuffed into the XS plastic versus the wider XR bodywork found wrapped previously. With that in mind, the addition of intelligent Throttle Control (iTC) is a big part of the picture. Aside from offering three, shift-on-the-fly driving modes (Sport, Standard and ECO) the new iTC mapping is said to significantly improve throttle response on the 1200, especially when “blipping” the throttle. While we understand the value of throttle-by-wire systems, especially for “newbs” we’re still not sold on the iTC system on the 1200 where we experienced inconsistent results in response and hesitation at times just past engagement. Hopefully those kinks get worked out before the snow flies next winter.

Enduro Air Suspension – We scratched our heads a bit on this one after being told the new sand colored Renegade Enduro was geared more towards aggressive riding calibrations but was outfitted with the same air shock technology found on Ski-Doo touring sleds. However after one spirited romp down the trails we were sold, this is the best damn remote controlled air-shock system we’ve ridden. The on-board air pump controlled shock is mounted within a 137-inch rMotion rear suspension and comes with all the goodness we’ve come to expect from the rising rate and incredibly controlled skid. With a simple tap of a handlebar-mounted button, you can adjust the air shock to one of five preload settings for terrain. Ski-Doo brass told us the calibrations of the suspension are very similar to a Renegade X package with the added convenience and adjustability of the air-shock. We’ve got an Enduro penned for our stable next year.

tMotion Expansion to Renegade – While some competitors might point to the Flex-Edge track and tripod style rear suspension arm found in the tMotion package on most Ski-Doo mountain sleds as a “band-aide” of sorts, there’s no denying how much easier and more capable the system makes it to ride off-trail in deep snow. Now those attributes will be found in Renegade Backcountry models as Ski-Doo looks to make these sleds even more tailored towards and capable of backcountry riding. Key components include the addition of a new 146-inch tMotion rear suspension and a new Cobra FlexEdge track with 1.6-inch lugs. The new Cobra track will be 16-inches wide, just like the Summit stuff, making the Renegade Backcountry the hot new ticket in the bushwhacking, off-trail warrior category for those of us who like to venture off the beaten path points east of the Rocky Mountains.

Renegade Enduro – Maybe it’s the color; or maybe it’s the classy finishing touches such as the Enduro embossed seat and all-black chassis; or maybe it’s the unique combination of rMotion goodness with Air ride, new Pilot TS skis, and standard Ice Ripper XT track that has us drooling for this latest offering from Ski-Doo. Designed to be a do-it-all sled with a bit of an attitude, Ski-Doo nailed this one in our opinion. We can picture some color matched ballistic storage bags on the back, a side-mounted saw, and a week with no particular place to go with this sled.

Summit Burton – This isn’t the first time the snowmobile kids have tried to build a bridge with the boarder community, but this is the first time a company has went all-in and developed a sled that is co-branded with perhaps the biggest name in snowboarding. The Summit Burton was developed with direct input from some serious folks with plenty of snowboard acumen. Under the white and Burton stenciled tunnel is a sled that is pure Summit at heart. What’s different is the unique two-up seat ready to haul driver and passenger to where the fresh downhill powder lurks. More importantly is the easy to attach snowboard mount that comes standard and was developed in conjunction with Burton. We’ve already been contacted by a few of our snowboarder friends (See the article To the Boards in last issue –ED.) about getting their hands on one to try next winter.

MXZ Blizzard – While there really isn’t a lot new going on here with the return once again of the Blizzard name, in season buyers will be happy with the results. With four engine choices (800, 600, 1200, and 900ACE) and standard rMotion 129 rear suspension, Ice Ripper track, Pilot TS adjustable skis, and quality HPG shocks, the Blizzard represent an X model of sorts without spring ordering one.