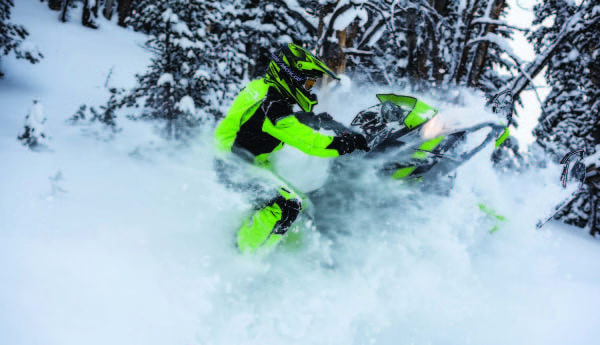 Arctic Cat was the first manufacturer this winter to drop the bomb on new iron for next winter with the long awaited release of their new C-TEC2 800 twin. We were lucky enough to ride both the trail tuned ZR8000 Sno Pro (see the full ride report elsewhere in this issue) as well as the new M8000 mountain buggy. Our head honcho from the OSM Idaho Wrecking Crew, Tyler Swarm joined the Arctic Cat western engineering crew for a few days in early February to rip the M8 and reported back grinning from ear to ear.

“The improved low-end torque is immediately noticeable,” said Tyler. “They eliminated the bog and hesitation found with the old 800…the new C-TEC2 8 is crisp, efficient and clean running. The sled feels lighter and more nimble and the small changes they made to the suspension make a huge difference on snow, especially in trail chop leading to the powder and in big rolling G-outs. The sled responds instantly and gets atop the snow quicker…this one is going to be hard to beat.”

Look for a deeper dive ride report in the coming days as we continue to thrash this new mill and deep snow upgrades – Ed.