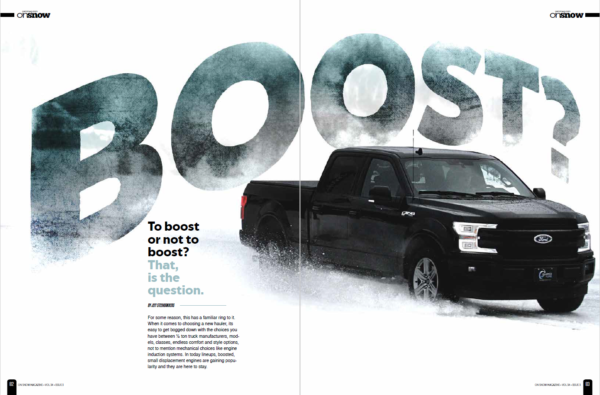 For some reason, this has a familiar ring to it. When it comes to choosing a new hauler, its easy to get bogged down with the choices you have between ½ ton truck manufacturers, models, classes, endless comfort and style options, not to mention mechanical choices like engine induction systems. In today lineups, boosted, small displacement engines are gaining popularity and they are here to stay.

To be fair, boosted gasoline engines in the ½ ton truck market have been around for a number of years, with offerings like Ford’s EcoBoost V6; however, this trend is growing. Ford now has two EcoBoost engines in the lineup, Chevrolet has a boosted 4 cylinder option in their pickups, and it doesn’t take a genius to figure out that more boosted options are coming. Thank you horsepower wars! 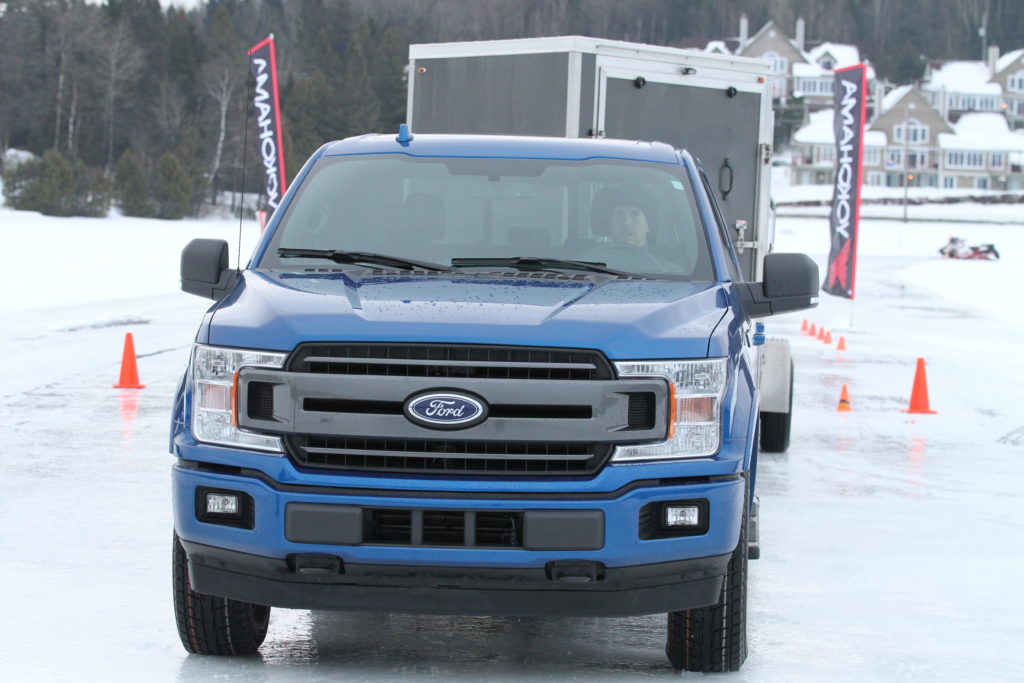 Diesel pickup trucks a have been boosted for generations, and if any of you have driven an old, naturally aspirated Ford/IH 6.9 or 7.3s, you are very thankful for this fact. Maybe you were a Chevy fan back then… remember the old non turbo 6.5? Or have you wiped that completely from memory? Those old engines were noisy, slow, dirty, and generally underwhelming. Today’s Diesel engine offerings are not even on the same planet compared those early ones. Even diesel engines in the ½ ton class would put those early ones to shame.

Diesel sales however, in the ½ ton class have not been as brisk as anticipated. In speaking with dealerships, gas engines are still dominating in this class, just as diesels do in the ¾ and up classes. Perhaps it’s the initial cost, or the (currently) more expensive fuel at the pumps, or the fact that these lighter duty trucks are used as family vehicles, and the prospect of dealing with a diesel is too much of a shift for buyers. Whatever the reason, gas is still the half-ton king.

So, I say bring on the boost! Having driven and towed with both boosted and naturally aspirated trucks, the smaller displacement mills under boost are pleasantly surprising to experience. About the only thing they’re missing is the burbling exhaust note of a V8. That and the ability to brag about big cubic inch numbers when comparing size with the guys.

In Ford’s case, the two engines battling it out for your power choice is the 5.0L naturally aspirated V8 and the 3.5L EcoBoost. For the sake of argument, I’m leaving the base 3.3L non-turbo V6, and by extension, the 2.7L EcoBoost, also the high-output version of the 3.5, out of this comparison. These engines are either base engines, depending on packages such as XL or XLT, or Raptor. In addition, the 3.5EB and 5.0 are the two optional engines that are the closest to each other in their performance characteristics, and therefor the toughest to choose between. 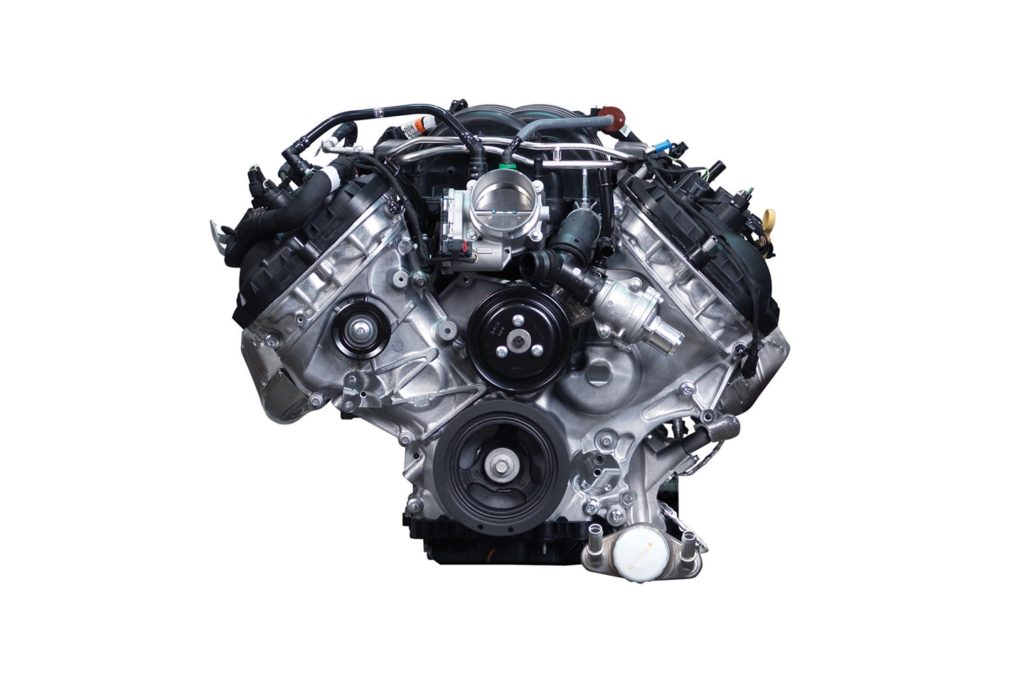 As per Ford’s own numbers, the 3.5 EcoBoost brings 375 horsepower and 470 lb-ft of torque to the party, while the 5.0L has 395 horses and 400 lb-ft of torque. With each engine leading in one power category, other details need to be considered. Details like fuel consumption and tow ratings.

Driving each engine, the EcoBoost has the V8 outclassed easily, both empty and loaded. The V8 does sound much better across the RPM band, while the turbo V6 has more noise. However, the EcoBoost does have a detectable turbo whistle that wins it back some hero-points! Pulling a trailer, the EcoBoost rolls down the road effortlessly, thanks to its flat torque curve, concurring hills and passing zones with ease. The 5.0, is no slouch, and still easily gets the job done, but it feels like you are pressing on the throttle a little harder than its boosted brother to do the same work.

Properly equipped, the EcoBoost also eclipses the 5.0 by 1,700lbs., with a 13,200lb maximum towing capacity, compared to the 11,500lbs. maximum of the 5.0L. Inversely, the 5.0 has a greater payload by 40lbs. over the EcoBoost, although I can’t explain why. Even with these lofty tow ratings, I still don’t think I’d want to be towing at their maximums. They each have plenty of power to get the load up and moving, my concern would be more about the control and braking aspects of towing loads of this weight with a ½ ton. 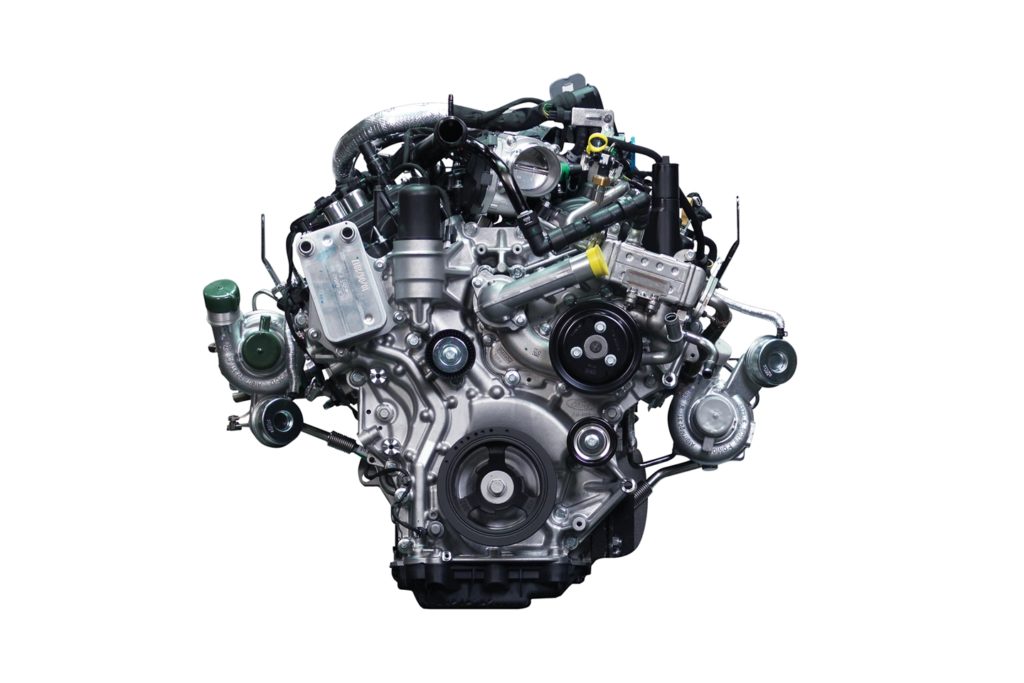 Ford’s 3.5L Ecoboost V6 engine is fun to drive and brings 375 horsepower to the plate with 470 foot pounds of torque, with a max towing capability of 13,200 pounds.

On the fuel consumption side, the numbers aren’t as cut and dried. That’s because in the real world, stated fuel economy numbers are a guide at best. There are simply too many variables involved in everyday driving to accurately predict how far each litre of gasoline will take you. Even trying to find actual numbers to quote seems elusive and as varied as the models these engines are available in, so I’m not even going to include them here. Throw towing a trailer into the mix, and the variables multiply again.

With our experience, here’s what we found between these two power plants. In general, each truck came close to the advertised numbers, given that the models were being driven at the time, sometimes even achieving better numbers. On a day to day basis, the EcoBoost was better then the 5.0 by 2 to 3 L/100Km average, which included city and highway driving. In addition, each truck wasn’t driven with achieving the best fuel consumption results in mind, which is a little boring. 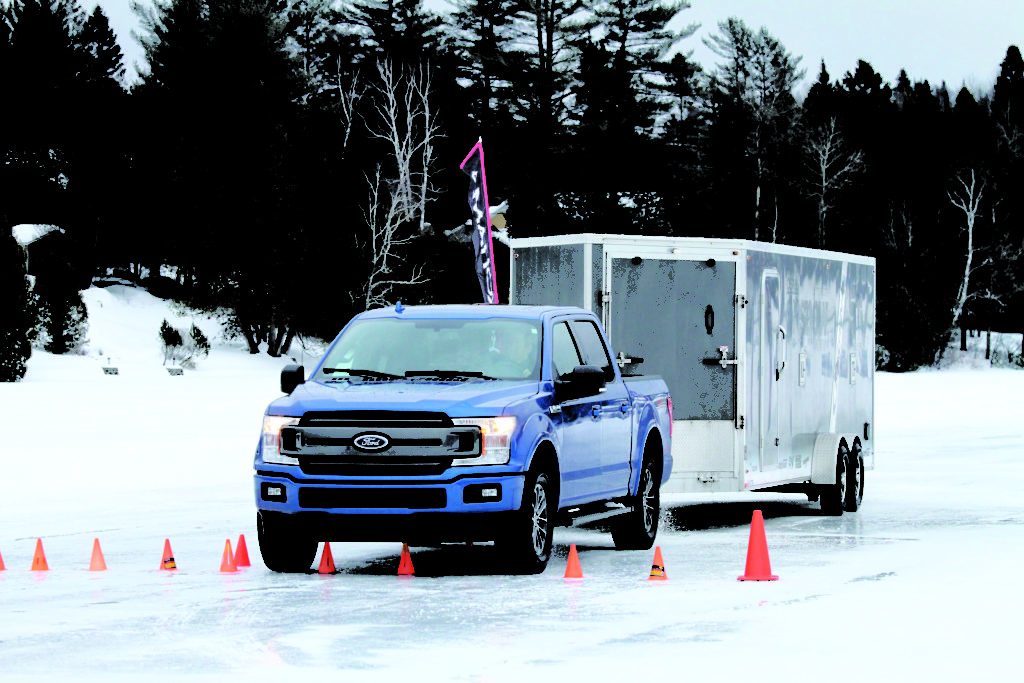 When towing, the 5.0’s economy fell off as expected, but not as much as the Ecoboost. On a long hill, you can watch the fuel gauge drop on the turbo, but after all, it takes fuel to make power. Power sure is fun though! The boosted engine feels much more like a diesel while towing, as its invisible hand of torque is pushing you along. Towing and its impact on fuel economy really does have to be one of the main factors in making a decision to boost or not. For a truck that is intended to spend the better part of its life towing, the V8 may be a better option for its more consistent mileage numbers.

To confuse matters even more, both the 5.0 and 3.5 EcoBoost are $2,350 power train options, over the standard 2.7L Ecoboost in such models as the XLT and Lariat. Which isn’t bad, considering the diesel option in the same platform is a $7,500 premium over the base engine. Ongoing maintenance costs between the V8 and V6 are also very similar to one another, as oil changes and filters are almost a wash with these gassers. Then there’s the resale market where neither truck comes out as an identifiable winner for retained values.

With near identical costs, trying to decide to go boosted or not comes down to use and the individual stroking the cheque. Personality, I would probably choose boosted, and be prepared for the extra fuel consumption while towing. The power of the turbo is just too inviting to pass up for towing, and I have to say, it’s a lot of fun unloaded as well. Turbo lag is all but non-existent, and the “little” engine easily lights the rear tires with a 3.55 limited slip. While completely irresponsible, the ability to perform this particular feat puts a huge tick in the win column for me. 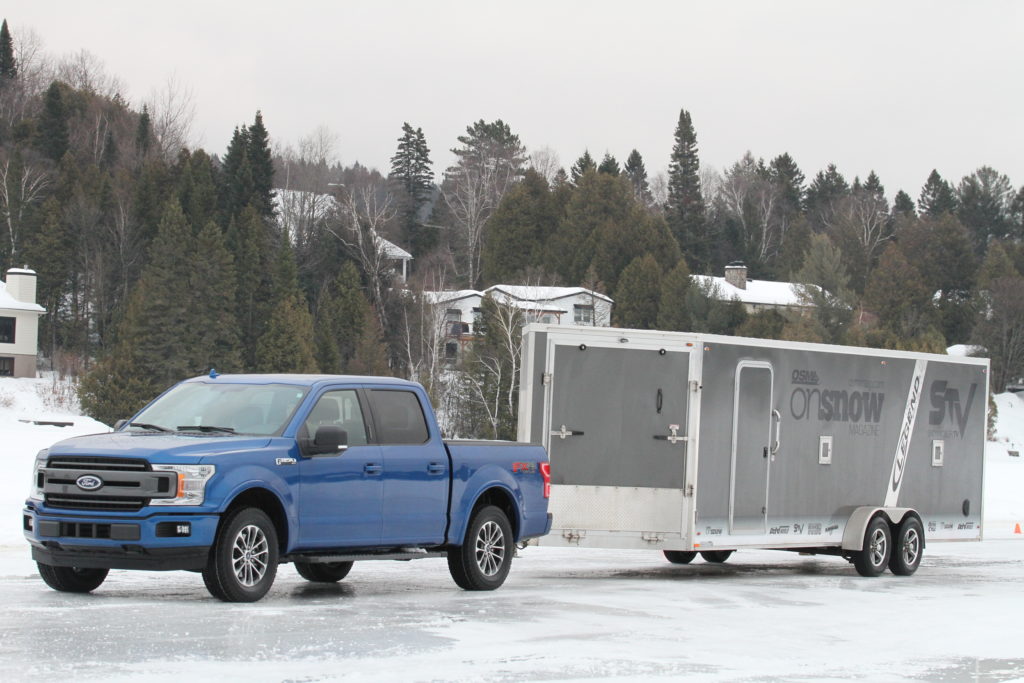 So, even though most of the commentary inside this article was based around the Ford F-150, it’s also the vehicle line that I’m most familiar with. That said, the mixing of boosted and naturally aspirated powered light trucks is only going to grow. Fans of different manufactures will face the same, to boost or not to boost, choices in future buying decisions. I for one, am looking forward to more boosted options across light truck manufacturers. As consumers, I believe we are in for a future with more power and better fuel economy. Perhaps one day, naturally aspirated gas engines in pickup trucks will go the way that naturally aspirated Diesel engines did, and again we will all wonder how we did it back in the old days.