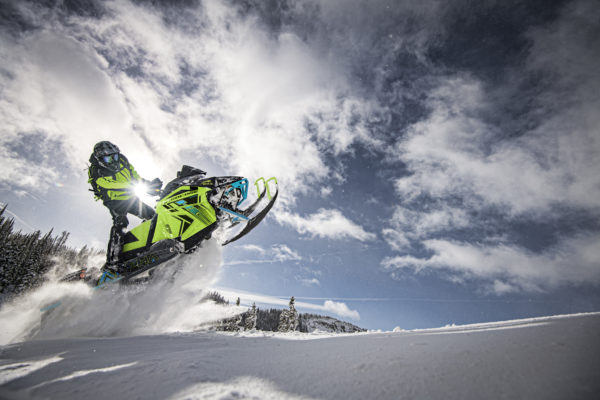 Not just with lots of early snow and cold in November… but also with the early release of all of Arctic Cat’s 2021 models. The big news? A full line of 397cc mid-sized or medium sleds for all the good little boys and girls across Canada and the US to enjoy! It’s called the ‘Blast’, and once the obvious puns are done being used by other medias, you will find that this is not a gimmick sled. Not only is there a whole new chassis for model year 2021, but Cat expanded technology in the Alpha One equipped mountain and off-trail sleds and is reinvigorating their utility offerings.

This is the most well-rounded lineup we have seen for decades from the green team. Since Textron took charge in January of 2017, many media folks and loyalists have been waiting for them to flex some of the muscle they brought to the smaller AC. To many, some of the early marketing moves were interesting, but there is no denying that the industry desperately needed the 200cc sled introduction a couple years back, then the Alpha One came into being, and now Cat and Textron are poised to hit a homerun with the new Blast.

In short, the elves up in Thief River Falls Minnesota at Arctic Cat (Textron) have been very busy. 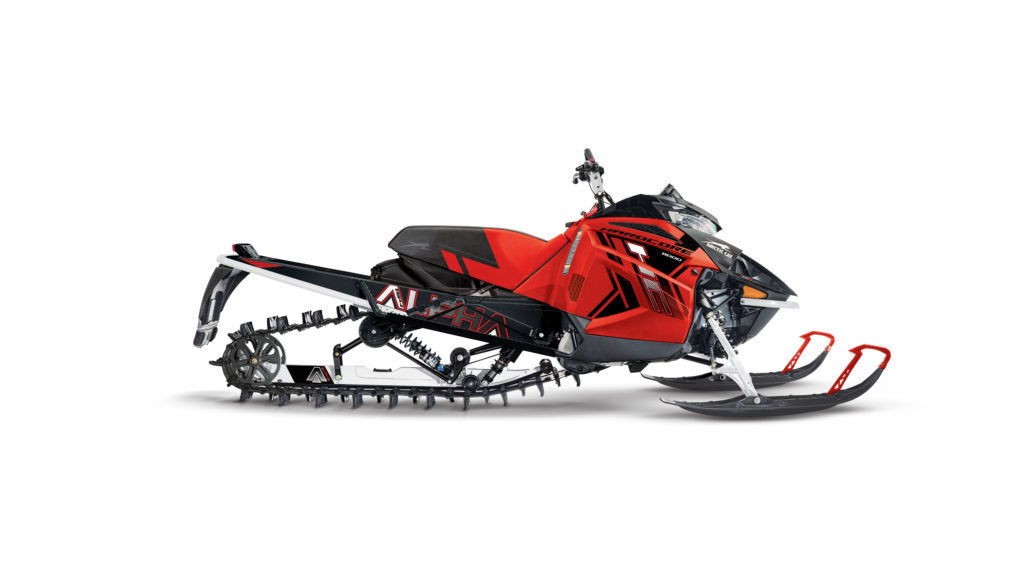 Blasting it out of the park!

As a dad with kids who are avid snowmobilers and will move up and out of the 120-200cc market in the next few years, it was especially exciting to see these new Blast sleds from Cat. The 3-sled lineup hits each market segment including the trail, crossover, and off-trail rider. The power plant is a single-cylinder, fuel–injected version of the C-TEC2, and is roughly 65 horsepower. At a starting Snowmageddon price of $7695.00 US and $10095.00 CA for the trail versions, these sleds are affordable as well. Costs will be $400.00 more US and $500.00 more CA for the mountain and crossover machines… and MSRP will be slightly higher as well.

Dubbed the 4000, (roughly 400cc and in line with the nomenclature of the other Cat motors) this powerplant is a perfect amount of umpf for this application, and it is EFI which is great as well. Having only basically carbed motor options for many years was a major drawback for families looking for a modern powerplant in a smaller sled. Families have been kind of stuck looking for an older 340 or 440 for a ‘step-up’ machine that would fall in-between a tiny 120cc and an 80-90mph 500cc liquid sled. The EVO from Polaris was the only brand new mid-sized option… until now. The 50-pound powerplant in the Blast is super-lightweight too and should have a great power-to-weight ratio! This engine is built in St. Cloud, Minnesota, and the sleds were designed and are manufactured up at home base in TRF. CVTech does the drive and driven clutches. 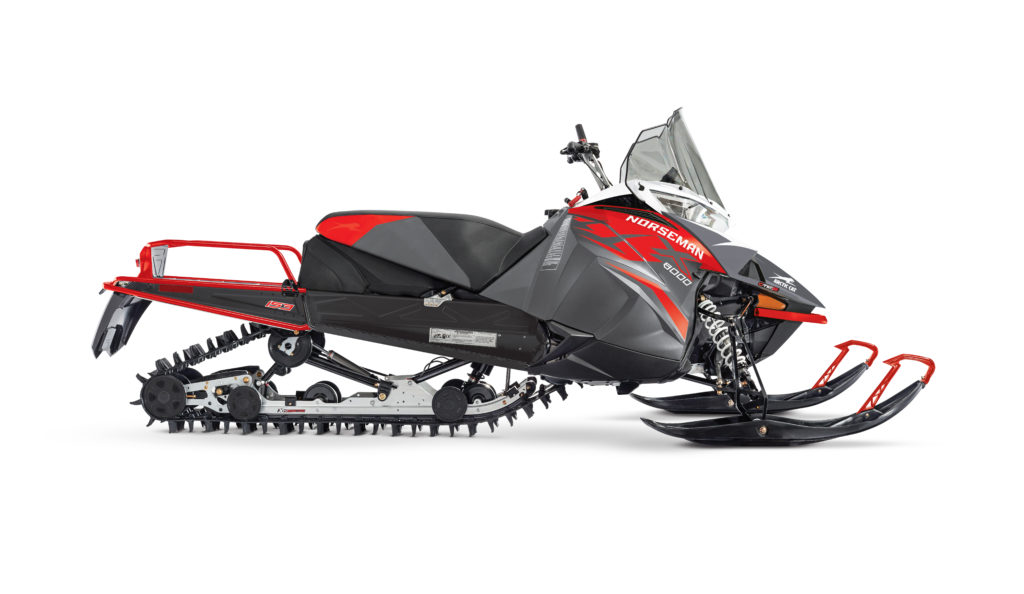 The Blast M 4000 is the mountain version, and comes with the single-beam Alpha One rear suspension with a 146-inch Challenger track with 2-inch lugs. That will get any smaller rider into the backcountry to hang out and learn with mom and dad! Plus, it has the AMS mountain front suspension with adjustable 37-39-inch stance, which is a greater range than the adjustability on the other 2 Blast models, and it has riser with mountain grab bar. There are G2 mountain skis and Canadian or American Flag special edition colour options too!

Then there is the crossover/utility Blast LT model, that is also 146-inches long, but comes with 1.6-inch lugs on the Cobra track. There’s a utility rack and Xtra-Action dual rail and dual shock rear suspension. The seating position is high, handle-bars get the grab-bar, and there is a bigger windshield than the low one on the M-sled. This is a great option for all kinds of folks who like to ride trails, but also need to possibly cut/haul firewood, or pack-in a bunch of fishing gear, or maybe want their kids to use their sled to do some of the work for you!

Finally, there is the new Blast ZR 4000 is the trail version with shorter 121-inch track and 1-inch lugs. This one is made to be easy to ride, and to flick around the trails, and to be able to maneuver for smaller (or newer) riders. The Slide-Action rear suspension has made Cat sleds exciting to ride over all kinds of trail conditions for many years, and now comes on this machine with a single piece tunnel above it. Oh, and did we mention that these new Blast sleds have electric start? When I was a kid we weren’t allowed to ride a sled until we could pull the rope over on it, but that’s not always practical in the real world. I would rather my kids have more fun time out there with me and not be constantly trying to start their sled doing the ‘pull cord, grab throttle, work the choke, Olympics’.

There is a 3-stage exhaust system on the Blast and we are told throttle response is quick and predictable. If it is anything like the 6000 version, one of the most easy-to-ride sleds on the market, then this sled (with its counterbalanced shaft) will be even smoother and a joy to ride. Tack on a digital gauge and this is a real-sled, again not a gimmick, and not a toy that is gussied up. There’s a full sized 11.7 fuel tank for all day fun. The rear suspension has between 10.7 and 12.5 inches of travel, (depending on model) and the front has 7.2 inches of travel. That’s more travel than all of the sleds combined that we had when me and my siblings got our snowmobile licenses! 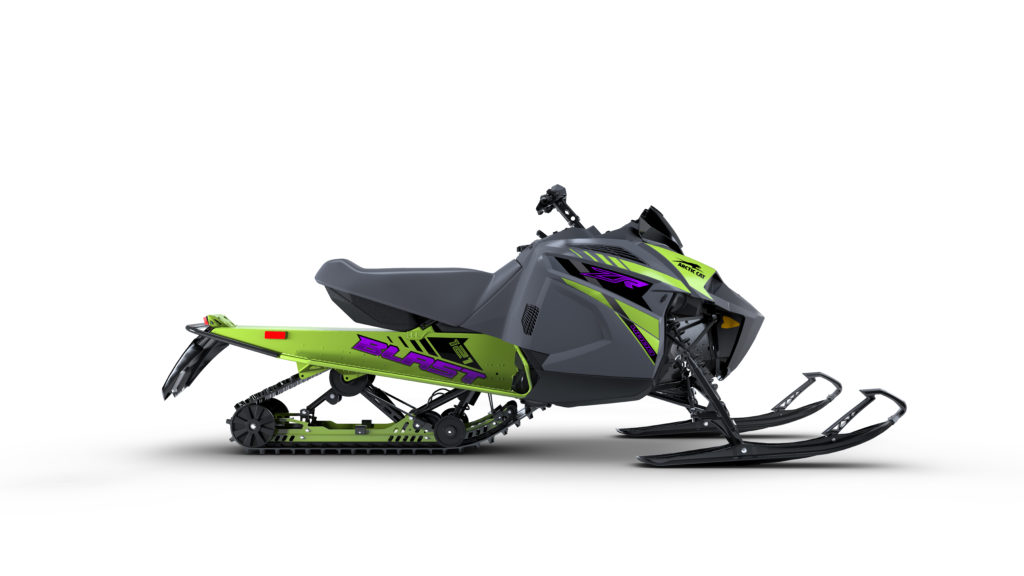 Cat is not done yet!

As if bringing out a full new chassis was not enough, Cat made changes across the board in their 2021 lineup. The 146-inch Riot X 8000, which was the more off-trail focused version of the Riot that came out last year, gets a new version of the Alpha One mono-rail rear suspension for 2021. The Riot X is also in the Ascender mountain platform with vertical steering post. A Powerclaw 2.6-inch lug track sends this one through almost any amount of snow. This sled is especially fun for aggressive and tight sidehilling, and certainly for varying snow conditions and to be a jack of all trades for North America in spring snow, hard pack, wet snow, deep snow, etc.

The ARS II front suspension is the same and Cross-Action rear suspension is on the standard Riots. The other Riot 8000 and 6000 models get bold new graphics, but they are BOLD! In particular I appreciate that Stealth brake and short-throw brake lever. I honestly believe there is no reason that the lever (or an option of which one you would like) is not available on every single Cat sled made… or other OEM sled. I mean, heck they hardly even sell levers in the catalogues because they are so cheap, but a great personalization feature.

The Alpha mountain sleds were improved for 2021 as well! The iAct, now called ATAC adjustable on-the-fly suspension system was added to the electric start-equipped M8000 Mountain Cat Alpha One. Fox Float 3 QSL shocks accompany this suspension system, and you can toggle from soft to medium to firm in the blink of an eye and set two different rider compression settings. There is an electronic lockout for the QSL rear shock too. 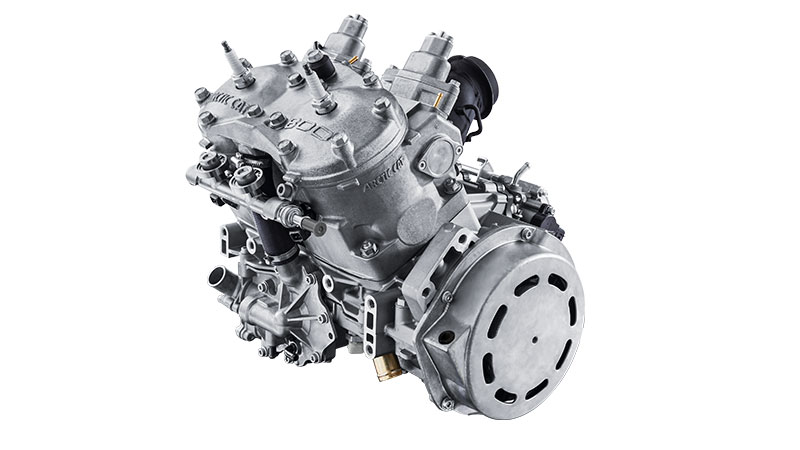 You can get the Alpha One Hardcore 8000 model again this year too. These M-sleds continue to all be in the narrow Ascender chassis, and the Hardcore has the option of a new 2.6-inch lug Power-Claw 154-inch track with new side-towers and 2.86 pitch. Both these 8000s can come with a 165-inch or 154-inch version and an option of the smaller or larger 3-inch tall lugs. The front end is still suspended in the AMS front end as well.

As far as the ZR trail sleds are concerned, they are relatively unchanged, except for the Fox shocks and change of name to the ATAC suspension. The ATAC is available in the ZR 9000 Thundercat, ZR 8000 Limited, and ZR 6000 Limited. The ZR 8000 RR and 6000 R XC, the more snocross and cross-country race-ready sleds, round out the trail line. 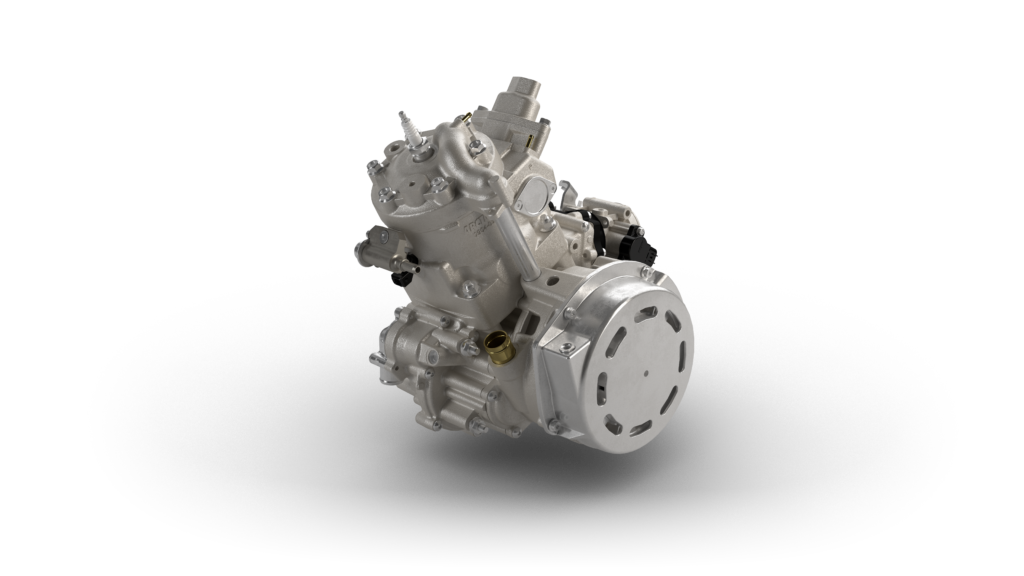 The Norseman X 8000 and youth 200 and 120 also are in the mix for 2021. The X 8000 is an extremely fun and capable utility workhorse with new paint, electric start and Xtra-Action rear suspension.